This time I know the victim. 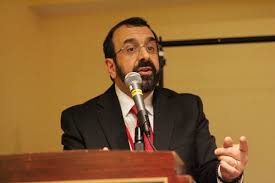 Via Irish Spy, Bound and gagged:

Robert Spencer of Jihad Watch will join Siggy and I this Wednesday at noon for a special podcast.

Robert will be talking about his new book, Religion of Peace? Why Christianity Is and Islam Isn’t

I read the book over the weekend and highly recommend it. Western civlization stands on Judeo-Christian values, and both are worth defending.

Tomorrow at noon Robert will be podcasting with Pamela of Atlas Shrugs.

The big news around the blogs (and I include Drudge) is Ann Coulter.

I’ve never liked Ann Coulter because for as long as I’ve been aware of her existence she’s been one of the people lowering the bar of political discourse. She’s a very intelligent woman, and, while some think she’s crazy, I believe that not only she’s not crazy and she knows exactly what she’s doing, she’s cashing in on it. The picture I took of the people standing in line for an autographed copy of her book at CPAC doesn’t start to show how many were in line to buy her book:

To give you an idea, the exhibit room had been converted from the indoor parking area and was approx. 100′ x 200′. The line at the point where I took the picture had started 300′ away, and extended another 100′ behind the last person on the left in the picture. Now, I know for a fact because the line formed right in front from where I was sitting that the people in line got in line BEFORE Coulter even started her speech on Friday. But this is not the first time Coulter’s done her schitck at a CPAC.

I am sure Edwards’s campaign people are getting donations because of Coulter’s “careless” remark.

The way I see it, you either do invective and vituperation, or you don’t.

As Mama said, while talking about other matters,

and name calling and invective are symptoms of weak thinking.

Now, Coulter was not debating anyone. She was just giving a speech to a very friendly audience. It wasn’t as if she got carried away in the heat of a debate. This was not the first time she’s addressed a large audience, so it’s not as if her nerves got the best of her. As I said, she knew what she was doing – weak thinking can be very profitable when the royalty checks arrive, too.

Weak thinking is contagious because it’s easy. It’s a heck of a lot easier than looking at the world and trying to find out what is going on, and what the issues are.

The day before I attended a real debate: Dinesh D’Souza and Robert Spencer debated “Terrorism: Is Religious Extremism or Secular Extremism the Problem?”

You can listen to the debate at the CSPAN website (click on Conservative Political Action Conference). The debate was brief but substantive and lively.

Even in the circus atmosphere of CPAC, there was real debate. There was an exchange of ideas. And lo and behold, no one insulted anyone. The audience was much smaller than for Coulter, and the lines for Dinesh’s or Dr Spencer’s books were much shorter. Lively as the debate was, both men remained civilized to each other. After the debate I had an opportunity and complimented each of them on their debate.

A few hours before Coulter spoke I attended Giuliani’s speech. This main theme was that America is a country of ideas. The ideas that Giuliani espouses are personal responsibility, strength as a nation, and America’s role in the world. Giuliani, who took on the Mafia and prosecuted terrorists before he was mayor of New York City, is a man of clear, strong thinking.

And he was sensational.

He didn’t have a single solitary volunteer handing out Rudy posters, stickers, or buttons, but the ballroom was packed to the rafters and the people who coudln’t get in would have filled another ballroom that size. He didn’t schmooze with the bloggers, even when I wish he had. He didn’t give a stump speech like the other candidates, he came to explain what he’s about.

He came, gave his speech, and left.

But by clearly explaining his ideas, he gave people something to take home and think about. One of the things people like me will think about is that Giuliani’s message will appeal to a large number of Americans, consevatives or not conservatives.

So here’s the situation:
– The conservatives can continue having Coulter as a CPAC guest and have a jolly good time as they amuse themselves with her insults and attacks. By doing so, as Steve put it,

This woman is doing things for the Democrats they could never begin to do for themselves.

If they choose that option, they lose all right to complain when Dean, Hillary, et al, sling the basests insults at them. All the while, they’ll drive the Republican party to sure extinction. Look at McCain: he stayed away, and rumor has it that he might do a third-party run. That will be disastrous. The Elephant will become as extinct as its genetic relative, the mamooth.

– Or the conservatives can bring more clear thinkers who can raise the level of the political discourse, and actually win elections.

One aspect of CPAC is all the college kids running around. Many idolize Coulter. Her lack of intellectual substance sets a poor example for those people to take back to their schools.