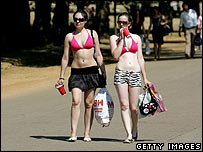 Via Barcepundit, the Brits are saying that Global warming ‘may cut deaths’:

While summers in the UK became warmer in the period 1971 – 2003, there was no change in heat-related deaths, but annual cold-related mortality fell by 3% as winters became milder – so overall fewer people died as a result of extreme temperatures.

And why is this?

Rather than physiological changes explaining our ability to adapt to rising temperatures, the report puts this down primarily to lifestyle alterations – our readiness to wear more informal clothes, for instance, and the shift away from manual labour.

Wonders never cease. People are adapting out on their own, without the government having to tell them to.

Here in the USA when old people retire they move to hellishly hot areas like Phoenix, Dallas and Miami while the EUropeans are worrying that heatwaves (where the temperatures remain in the 90s – what constitutes a balmy day in the Phoenix summer) will kill 15,000 elderly and disabled.

In state-run medical care, that sort of thing happens when all the doctors leave on vacation, the hospitals have no air conditioning, and the relatives abandon the elderly.

Even then, We should be shouting this from the rooftops: far fewer people are dying because of the temperature than in the past. Milder winters are far more important than hotter summers in achieving this.

I had planned on going with a friend from work, but she chickened out at the last moment because Lord Mountbatten was killed by a terrorist bomb a couple of days before our departure. I had already spent my hard-earned money on the plane ticket and reservations, so I went by myself.

I had a great time.

No, I didn’t stay in London to watch the funeral procession. The streets were impossibly crowded and the wait was very long, so instead I went on a day trip out of London. That was the first time I had Yorkshire pudding.

A few years later on another trip to the UK (which included parts of Scotland and Wales) I had one of the best meals of my life in York: roast leg of mutton, Yorkshire pud, and white aspragus. Oh, that was good.

I still remember it.

In a blender, combine the eggs, milk, flour, and salt. Blend until well combined and place in the refrigerator until ready to use (allow to rest for at least 30 minutes).

Put 1 teaspoon of the oil (or beef drippings) into each section of a 12-hole Yorkshire pudding tray or muffin tray and put into the oven on the top shelf until very hot, almost smoking. As soon as you take the tray from the oven, pour in the batter to three-quarters fill the tins (it should sizzle) and immediately put back into the oven. Bake until the Yorkshire puddings are well risen, golden brown and crisp, 15 to 20 minutes. Don’t open the oven door until the end or they might collapse.

While I don’t like Ramsey’s outbursts in his TV shows, this sounds Good. The rest of the WSJ article includes his recipe for Roast Beef With Yorkshire Pudding & Red Wine Gravy, and Sautéed Cabbage With Caramelized Onions.

That should keep global cooling at bay.


I must admit that I’m not too fond of the genre and found the characters in Lucky Jim tiresome. After all, how much can you say about academic travail in English departments? But I might give Nabokov a try.

If you like the academic satire genre, you’ll probably have a good laugh reading the very prolific Alexander McCall Smith’s trilogy about Professor Dr. Moritz-Maria von Igelfeld of the Institute of Romance Philology:

——————————————————————–
Today’s shoes: Wellington boots.
For some reason the local stores are carrying them in different prints and colors. I own a pair of classic wellies because I needed them a while ago, but I don’t really understand the fad. Here they are, in case you do:

I just made these:

Stir together with a fork for 1 minute.

To bake in cast-iron cornbread pan like the above, pour 1/2 teaspoon canola oil to each section making sure it coats it, before adding the batter.

… and Lucianne has it.

It’s titled The Good, the Spam and the Ugly

And if you didn’t get his first book, what are you waiting for?

It has the best pie crust recipe on Earth.

Steve’s going to be on Fox. His fans eagerly await for details.

This is a traditional Puerto Rican dish, marinated salted codfish.

Rinse 2 lbs of salted bacalao (dried salted codfish), and place in a glass dish. Fill the dish with enough water to cover the fish. Cover.
If you’re working ahead of time you can leave it soaking in the refrigerator overnight. Otherwise, drain and replace the water once every hour for at least 4 hours.
(I do not advise soaking the fish in milk to drain the salt.)

After 4 hours, remove the fish from the water, rinse again, and dry with a paper towel. Cut in 2″ long pieces.
In a gallon-size zip-loc bag, pour 1 cup of flour. Place the pieces of fish one at a time in the bag, zip, and shake to cover with flour. Place on a plate.

On a large frying pan, pour 2 cups of the best quality extra-virgin olive oil you can afford, and heat on a medium flame. Add the fish, turn the fish over after 4 minutes, and add the onions, the bay leaves, pepercorns, and the garlic. Lower the flame to low and simmer for 20 minutes. Add the capers and simmer for an additional 5 minutes.

Remove from the flame, and let it cool for 20 minutes.

After it’s cooled for 20 minutes, place the fish on the bottom of a large glass caserole, add the onions, and the olives. Pour 1/2 cup of red wine vinegar and then add all the oil and everything that remained from the frying pan. Cover and place in the refrigerator. Marinade for at least 3 hours before serving. The longer it marinades the better it’ll taste. Preferrably, let it marinade overnight.

Serve at room temperature over freshly-boiled yuca (you can buy it frozen), or if you can’t find any, cooked white rice. Make sure to remove the garlic and bay leaves before serving. Serves six.

A couple of things to bear in mind:
Since it takes such a long preparation time, I only make this a couple of times a year. As I’ve said before, I’m all for a simple menu.
The better the quality of the ingredients, the better it’ll taste. Make sure to get the best extra-virgin olive oil, capers, olives, and bay leaf.
Purists prefer Betis brand olive oil, but I like extra-virgin olive oil.
Traditionally you’d use a cast-iron frying pan, but I prefer my Emerilware Stainless 12-Inch Fry Pan that can be placed in the dishwasher.
If you like it zippier, add more vinegar. I prefer a milder taste.
The reason for using a glass dish is that you must use a non-reactive non-porous material to marinade the fish.
Open a window a bit, and wash down the kitchen surfaces after you’re through cooking because the cooking smells will linger.