Brace yourselves for the latest anti-American agitprop: The U.S. has three original sins: Slavery, racism, and “the aggression against Mexico and the plundering of its territory.” Because of that, all Mexicans should be free to live in the U.S., without restrictions.

A lawsuit is being filed asking to nullify the 1848 Treaty of Guadalupe Hidalgo, since it was the result of America’s “first imperial war.”

Activists on both sides of the border are going to quote Krauze’s article as Gospel.

Hollywood and Broadway, which have always played an important role in shaping the American historical consciousness, should take up the issue.

The article in question is Will Mexico Get Half of Its Territory Back?

Like other upper-class, rich, Caucasian Mexican activists in the United States, Krauze wants an open border for Mexicans entering the U.S., the very same racist, aggressive, plundering country he derides:

For us Mexicans, this is the chance for a kind of reconquest. Surely not the physical reconquest of the territories that once were ours. Nor an indemnification that should have been much greater than the feeble amount of $15 million that the American government paid, in installments, for the stolen land. We need a reconquest of the memory of that war so prodigal in atrocities inspired by racial prejudices and greed for territorial gain.

But the best and most just reparation would be American immigration reform that could open the road to citizenship for the descendants of those Mexicans who suffered the unjust loss of half their territory.

Never mind that an original sin is a hereditary stain with which we are born on account of our origin and the United States declared its independence in 1776, over seventy years prior to the period Krauze refers to in his article.

Here are a few facts:

Timothy Henderson makes the case that the Mexican ruling class knew they would most likely lose the 1846-1848 war in his book, A Glorious Defeat: Mexico and Its War with the United States

The war that was fought between the United States and Mexico from 1846 to 1848 was a major event in the history of both countries: it cost Mexico half of its national territory, opened western North America to U.S. expansion, and brought to the surface a host of tensions that led to devastating civil wars in both countries. Among generations of Latin Americans, it helped to cement the image of the United States as an arrogant, aggressive, and imperialist nation, poisoning relations between a young America and its southern neighbors.

In contrast to many current books, which treat the war as a fundamentally American experience, Timothy J. Henderson’s A Glorious Defeat offers a fresh perspective by looking closely at the Mexican side of the equation. He examines the tremendous inequalities of Mexican society and provides a greater understanding of the intense factionalism and political paralysis leading up to and through the war. Also touching on a range of topics from culture and ethnicity to religion and geography, this comprehensive yet concise narrative humanizes the conflict and serves as the perfect introduction for new readers of Mexican history.

“Facing Trump, can we reclaim the territories stolen in the 1847 invasion?”

And don’t forget, While Mexico’s oil industry generated US$18.7 billion and tourism $17 billion in 2016, remittances reached $27 billion. 95% of those remittances come from the U.S.

The U.S. owes Mexico absolutely nothing.

A question: If Mexico wants to bring up restitution for “atrocities inspired by racial prejudices,” are they willing to give restitution to the Catholic Church and the descendants of the cristeros mercilessly slaughtered ninety years ago by Mexican government anti-Christian prejudices?

Cuban TV programming to be broadcast in U.S.

Cuban programming is coming to U.S. airwaves thanks to DISH, the Colorado-based provider with 13.9 million TV subscribers. The company announced the launch of a new channel Thursday called CUBAMAX TV, which will carry entertainment programming created in Cuba featuring some of the island’s most famous celebrities. The channel will not feature any political or news programming, but instead will focus on comedies, children’s programming, music videos and telenovelas.

The channel’s operations will be in Miami, where producers will package shows from Cuba and distribute them to subscribers of DishLATINO.

For sure, they won’t be showing this..

I hope they do as well as al-Jazeera America.

Well, it turns out that it’s not just a dumb idea, it’s probably an illegal one.

The millennials I’ve been in close contact are clean, polite, professional, and dedicated to their work. They don’t live in mom’s basement. They pay their bills on time. They eat salad and veggies out of their own volition like the grown-ups they are. They are earning your respect.

Read my article, A few good words on #Millennials

The evolution of the treachery of images:

This is not a girl: 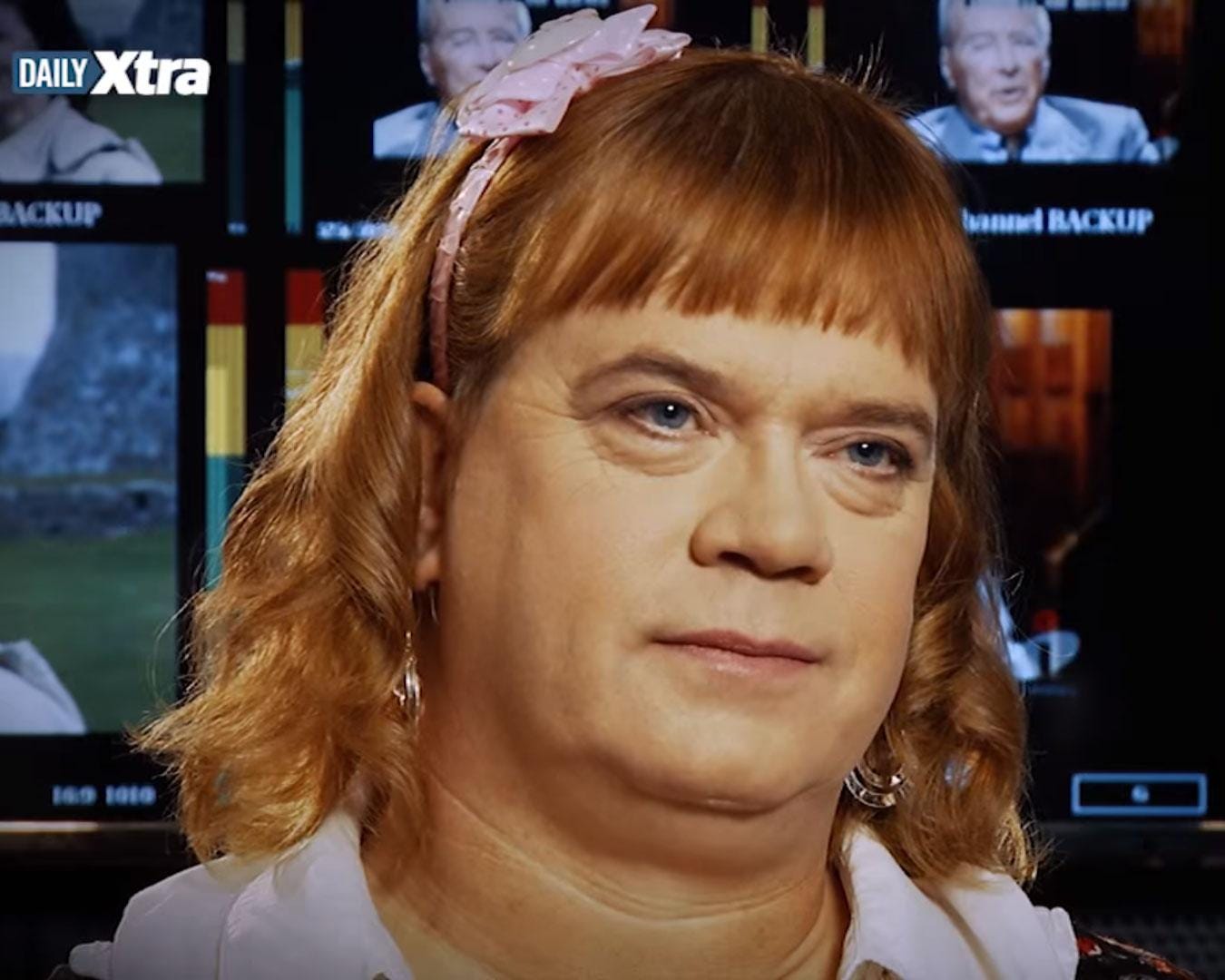 Read my article on the evolution of conflicting images, “This is not a pipe,”

"Money should be put to use for good reasons, not for private bank accounts." – Margaret Chan of @WHO #FungForum

Margaret Chan, from the People’s Republic of China, is Director-General of the World Health Organization. She was part of the Fung Forum which Princeton University joined today.

Princeton U. costs $63,420/yr for undergrads. A student without financial aid would cough up over a quarter of a million dollars over four years, most likely from the parents’ private bank account(s). Pricey, for propaganda you can get for free on Twitter.

@Princeton @WHO Why isn't a private bank account from legally hard-earned money a good reason?

@Fausta Thanks for sharing your question. We've reached out to Dublin for more context on these remarks.

@Fausta We've just tweeted a correction, as our original tweet was inaccurate. Thank you for raising a good question.

So much for that.

During WWII, Japanese propaganda tried to demoralize American soldiers serving in the Pacific,

Alas, Argentina is broadcasting to the Falklands,

. . . the broadcasts were an attempt to “break the media siege” around the islands, where Argentine TV signals cannot penetrate, and “guarantee the inhabitants a right to information in the English language.”

Information broadcast to the “English-speaking Argentinians” in previous editions included stories about trade surpluses, transgender rights and many, many more stories on how wonderful President Kirchner is.

Irrelevant, uninteresting and sometimes even unintelligible, the “Boletín Malvinas” – a product of Radiodifusión Argentina al Exterior (RAE) – is a textbook example of how not to do effective propaganda.

The show may have been going two years, but there is little evidence it has had any effect, or that anyone is indeed listening. Taking a listen to recent editions, it is easy to see why.

It broadcasts at midnight, or, as Nick puts it, “when most islanders are presumably in bed.”

I nominate Lanata’s show (in Spanish) as the antidote,

Today’s must-read, via Carlos Eire,Luis Ball’s article,
You Will Not Like Cuba
Media Hype Sells Product That Does Not Exist

Maybe those readers who plan to visit this Caribbean paradise would like to know something that Time, Newsweek, and the New York Times have omitted: their phone conversations will be bugged, and possibly they will be secretly filmed in their hotel rooms. Remember, this is not Berlin after the fall of the Wall; this is Berlin before!

Twenty years ago, Fidel Castro began to promote his imprisoned island to foreign tourists. Canadian and Spanish tourists initially poured in. Eventually, however, word got out that Cuba was not much fun.+

Today, they still trickle in, but the boom in tourism that the Castros expected has not materialized. Those who do visit Cuba do so because it is, by far, the cheapest destination in the Caribbean. Those Europeans and Canadians who can pay more ignore Cuba as a destination.

I was born and raised in Puerto Rico. My father worked for many years at what then was at one of the top hotels in the Caribbean. I sincerely do not understand why anyone would go to Cuba when you can find, not only in Puerto Rico, but all across the Caribbean, top-rated resorts (where, as a bonus, you are not subsidizing a murderous Communist regime intent on not changing).

As Capitol Hill Cubans point out, business will not bring change to Cuba,

The business community has been a key supporter of some of the worst dictatorships in modern times — all for the sake of stability.

Related:
A brief video of a street in downtown Havana, “in a good part of town,” and keep in mind Cuba received in 2014 US$300 million in trade from the US and 3 million international tourists:

Click on the photo above for more on Cuba travel.

Persona Non Grata: A Memoir of Disenchantment with the Cuban Revolution