Pope Benedict XVI’s decision to step down from his office was made soon after his trip to Mexico and Cuba in March 2012, according to a senior communications officer at the Vatican.

“What’s interesting is how long ago this decision was made, shortly after the Pope’s trip to Cuba, which was in March of last year,” said Vatican advisor Greg Burke.

This is what can happen when you visit Hell and meet with the Devil.

Pope Benedict XVI is to resign at the end of this month after nearly eight years as the head of the Catholic Church, saying he is too old to continue at the age of 85.

Again, just to give some historical perspective, the last time this happened, Gutenberg hadn’t yet invented the printing press. What does it mean for the Catholic Church today, with 1.2 billion faithful and the state of the Vatican in the balance? Administratively, not much.

But, does Benedict get to keep his Twitter hnadle, @Pontifex?

Dear friends, I am pleased to get in touch with you through Twitter. Thank you for your generous response. I bless all of you from my heart.

ARGENTINA
I wouldn’t call it diplomacy: Argentina’s crass Olympics advert is the lowest form of diplomacy

Expropriations in Bolivia
Just when you thought it was safe
Evo Morales nationalises a Spanish electric company. Spanish companies got taken in Cuba, in Venezuela, and in Argentina; now in Bolivia.

Oh, how polite: Pope sends letter of thanks to Cuban dictator Raul Castro

Report: IKEA used Cuban prison labor to make furniture in the late 1980s
The Swedish company says it had an arrangement of a limited nature with Cuba and is investigating the allegations

Venezuela After Chavez: In the Footsteps of Franco, Ceausescu or Stalin?, (h/t Public Secrets).

Venezuela: say hello to the junta

In Spanish, Bocaranda’s update on Chavez’s condition: the Cuban doctors are finally facing reality and have ceased the radiation treatments.

“Cuba May Be the Most Feminist Country in Latin America”

What the USA can learn from Chile

Holy Week in the island prison:

The Pope’s failure to embrace persecuted Cubans, has sent a dangerous message to the Castro regime 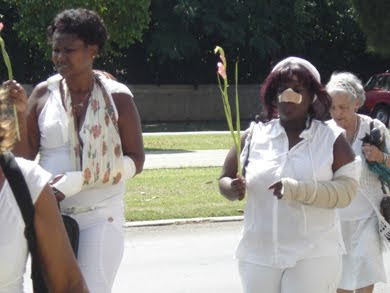 At least 43 Cuban dissidents have been arrested in areas near where Pope Benedict XVI visited last week, dissidents said Tuesday, as the United States urged their immediate release.
“We have been able to confirm that 43 opposition members have been detained — 10 women and 33 men — in a crackdown on Monday in the Santiago de Cuba area. All remain under arrest,” said Elizardo Sanchez, head of the outlawed but tolerated Cuban Human Rights and National Reconciliation Commission.

The man who protested during the Papal Mass has been identified: His name is Andrés Carrión Alvarez, age 38, and has been detained by the Communist regime since then.

“Today, we learned the identity of the heroic protester who denounced the Cuban dictatorship with shouts of ‘Freedom!’ and ‘Down with communism!’ during Pope Benedict XVI’s mass in Santiago de Cuba on March 26, 2012. His name is Andres Carrion Alvarez, and he has been missing since we last saw him brutally punched and dragged away by state security agents operating in white uniforms with red crosses designed to resemble humanitarian workers of the Red Cross. But as footage of the incident reveals, there was nothing humanitarian about their mission.

The Pope turned a blind eye (link in Spanish) to all the dissidents. Bernadette Pardo, writing in El Nuevo Herald, writes that Univision anchorman Jorge Ramos commented to her that “this Pope turns his back on the victims, and meets with the victimizers.” Pardo adds,

To sit by Raul Castro and limit oneself to saying that Cuba and the world need change is a solemn insult to those who every day risk their lives to transform Cuban society.

There was another protestor taken away,

He has not been identified.

But, you can be sure the Castros are happy that the Pope ignored the human rights activists and the dissidents, bought into the embargo lie, and granted Fidel a half-hour long papal audience. By doing so, Benedict

Gen. Raúl Castro, the Cuban leader, and his brother Fidel Castro were able to portray the image, domestically and abroad, that they are not international pariahs who are shunned by many world leaders for running a police state that has not allowed a free election, political parties or independent media for more than five decades.

For the Castros, it was a win-win situation.

Too bad the Pope can’t see.

Today His Holiness Benedict XVI disowned Christ in Cuba. Today, he averted his eyes from the eleven million crucified Cubans in his midst, as he celebrated the holy sacrifice of the Eucharist. Today, he chose not to speak for the crucified, or to chasten their tormentors. Instead, he spent his time criticizing the so-called embargo, blessing the tyrants, and preaching a platitudinous sermon written for the theological faculty at the University of Regensburg rather than for the Cuban people.

And his subaltern, Cardinal Jaime Ortega y Alamino, archbishop of Havana, beamed with satisfaction at the abject submission of Church to state.

While at Babalu, check the image of the day.

In other news, Hugo Chavez returned to Venezuela, perhaps after his Papal audience.

Yeah, yeah, now the Pope’s given another Mass in Havana’s Revolution Square, right under the Che monument (Che monument soon to get a Galway branch, like a bank). Benedict gave lip service to hope and change.

Raul Castro got the photo-op of his lifetime, getting a Papal blessing, even when Hugo Chavez didn’t attend,

and Fidel Castro got a private audience with the Pope

The meeting followed Benedict’s open-air Mass in the same public square where a younger, healthier Castro once delivered official speeches that lasted for hours and frequently railed against the United States.

Benedict turned a deaf ear to the people clamoring for freedom – in the video above you can hear the chant of “libertad, libertad” (freedom, freedom).

The Catholic Church remains silent on arrest of protestor and hundreds of dissidents in Cuba, yet,

Unofficial reports also seem to confirm the future saint Fidel’s first miracle: the instantaneous disappearance from the island of the Ladies in White and all dissidents.

The hand of God lets go of Cuba and Cubans?

I wouldn’t know about the hand of God.

But going by the evidence, one can safely conclude that the Pope sure doesn’t have b*lls.

The alleged meeting, which Bocaranda first reported was in the works on March 25, was arranged by Venezuelan diplomats who used to work at the South American nation’s mission to the Vatican, the journalist said. All participants agreed the brief meeting would be without media coverage, Bocaranda said.

Plenty of time to meet the Communists, no time for anyone else.