Anarchists, flashmobs, absentee Congresspeople, and hoaxers. Why go to the circus, when the circus comes to you?

Now we’ll see the effects of Buzzfeed’s micturition of a seriously doubtful “report:” And now, for Buzzfeed’s Urinetown.

The thing is, President-elect Trump won’t give an inch.

@benshapiro And telling them it's RAINING…..

The WaPo’s Lally Weymouth interviews Peru’s president Pedro Pablo Kuczynski, a.k.a. PPK. They talked about Trump, but more importantly, about China and the Trans Pacific Partnership,

Q. Your first foreign trip as president was to China. Are you looking to Asia for growth because Trump is threatening trade barriers?

A. China is our biggest market. It is about 22 percent of Peruvian exports — mostly metals but also some sophisticated agricultural products. We have no issues with China the way others may have with [its claims in the South China Sea].

Q. You are trying to get the Chinese to invest here?

A. The Chinese have two huge copper mines here. They are looking at several other projects.

Q. If the U.S. opts out of the Trans-Pacific Partnership , will China move in and ask TPP countries to join its own Regional Comprehensive Economic Partnership?

A. Right. This is a group that will include India, which is important for us because India is the one country we don’t have a trade treaty with. The idea we floated during the recent meeting of the Asia-Pacific Economic Cooperation (APEC) is that the Pacific Alliance countries — that is Mexico, Colombia, Peru, Chile — join the Free Trade Agreement of Asia and the Pacific (FTAAP). Basically, the FTAAP is the APEC countries without the U.S.

TPP was more ambitious, but it also had its detractors. It didn’t include China, which is the bigger player in the Pacific. Also on pharmaceuticals, the period of tests would have gone from five to 10 years, which might have raised the cost of pharmaceuticals in countries like Peru. So there was some opposition to it. A lot of the business people here love TPP.

Q. How about yourself?

A. I don’t love TPP so much. China is our biggest customer. So how can we support something that excludes them?

Post-Fidel Castro Havana may lose its long-time protector and guarantor of security, Russia, according to Cuba-watchers in Miami’s community of exiles and dissidents.

They predict Russian President Vladimir Putin will offer the incoming Trump administration a free hand to deal with Cuba as it sees fit in return for the United States recognizing Moscow’s invasion and annexation of the Ukrainian region of Crimea.

The assessment comes from former Cuban officials who fled the island nation under the rule of Fidel Castro. They said Putin is seeking to use the recent passing of Castro as an opportunity to take the pressure off a deteriorating domestic economic situation back in Russia.

It is an interesting premise, but my initial reaction while I read the article was, “Is this a trial balloon?”, and if so, from whom?

To say that I distrust reports based on unnamed sources, especially if those are “former Cuban officials” – and the report is not found elsewhere – is to put it mildly.

Non-disclosure agreements, or NDAs, have been around for decades. Politico just discovered them, now that Donald Trump is the President Elect, complete with a Grumpy Trump photo:

The people stand closer now, united by something we all have in common. We all got the bill, and it was paid in unemployment, taxes, collapsing public services or what have you. And the politicians, who are not us, have collected.

Lima writes about Brazil, but you can easily apply this to the U.S. election, Brexit, and elsewhere.

However, I never for a moment thought I’d live to see this:

Lima, like everybody else, doesn’t know what will happen next, or how it will all turn out in the long run, but you must read his article, The Glorious, Hilarious Political Chaos in Brazil 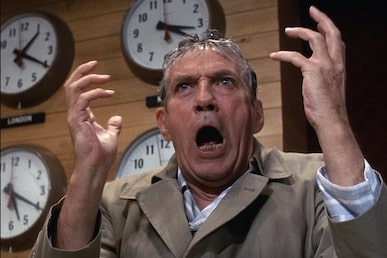 Howard Beale went to the polls.

Read my post, The Dems expected Andy Griffith; instead they got Peter Finch

Mexican cement firm Cementos Chihuahua says it is prepared to help US President-elect Donald Trump fulfill one of his key election pledges: to build a wall along the 3,000 kilometers of border that runs from Tijuana-Imperial Beach on the Pacific to Matamoros-Brownsville on the Gulf Coast.

“We cannot afford to be choosy. We have to respect our customers on both sides of the border,” said Cementos Chihuahua’s CEO, Enrique Escalante in an interview.