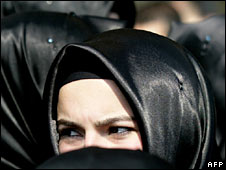 Turkey’s constitutional court has decided unanimously that it can hear a case aimed at closing down the country’s governing AK Party.

The chief prosecutor earlier filed a petition calling for the party to be banned for “anti-secular activities”.

He also wants 71 AKP officials, including the prime minister and president, to be banned from politics.

What’s troubling about Erdogan’s words is that nothing has been decided yet; the judges still have to decide upon the matter. Normally, the Prime Minister (and MPs by the way) don’t comment on pending cases, but Erdogan is in such a great panic that he isn’t able to keep his mouth shut for a while. In fact, today is the day that the court will decide whether it will take on the case or not. In other words, the court won’t decide today whether the AK Parti should be closed or not, it’ll only decide whether it’ll accept the case.

He’s clearly trying to influence the outcome of the case, which isn’t something a PM should do. He should wait… and if the court decides to accept the case and later that the AK Parti should be closed, he can speak out against it, appeal, etc. But until that time, he shouldn’t comment on it.

But he does, and this proves that he truly fears that the court may very well decide to give the prosecutor what he wants. As I understand it, this is quite likely indeed. The AK Parti has tried to destroy secularism from within for months and even years now. They started slowly, but ever since Erdogan won the elections last year he has ignored the opposition. Since those elections, Erdogan has been busy transforming the country, thinking that he’s untouchable.

Today may very well be the day that Erdogan starts to realize he’s not.

The court has decided to consider the case. The future of Turkey hinges on their decision.

Yesterday Siggy of Sigmund Carl and Alfred, Michael Van Der Galien of PoliGazette, and Rick Moran of Right Wing Nuthouse discussed the conflict between cultures, and the political implications for public policy.

…we participated in a terrific BlogTalk Radio podcast with Fausta, Micheal van der Galien of Poligazette and Rick Moran of Right Wing Nuthouse in which we discussed the differences between cultures for who creation is the highest expression versus cultures for destruction are the highest form of expression. Both Michal and Rick are astute observers and more than competent analysts. They possess teh capacity to see what is going on around them and understand what they are looking at- gifts not so common.

We also discussed what happens when cultures of creation meet cultures of destruction and the impact that confluence has on each.

We are going to continue this discussion in future podcasts. Our regular schedule is Tuesdays and Fridays at 11AM Eastern.

You can listen to yesterday’s podcast here.