The rolling disaster that the European Union has become continues,

Spain downgraded again, at risk of junk status, or close to becoming a new bra size at Victoria’s Secret,

Spain’s sovereign debt rating was slashed three steps Thursday by credit rating agency Fitch, which warned that the nation is at risk of being downgraded into junk bond status.
The nation’s debt rating was cut from “A” all the way to “BBB,” the lowest rating that is considered investment grade. And the new rating was given a negative outlook, meaning it at risk for further downgrades.

France’s new president, François Hollande, must think this is a good thing (if he’s thinking)

France intends to lower the legal retirement age from 62 to 60 for a small class of workers, the government announced Wednesday, maintaining a campaign pledge by the newly elected president, the Socialist François Hollande, and partly undoing a major change by his predecessor, Nicolas Sarkozy.
…
The change will allow people who entered the work force at age 18 or 19 to retire with full state pensions at 60, instead of 62, assuming they have paid into the pension system for 41 or 41.5 years, the period typically required to qualify for full state benefits. Exemptions for short periods of unemployment will be added and those for maternity leave will be extended.
…
The pension change is expected to bring more than 110,000 additional retirements next year, at a cost to the state of more than $1.25 billion, the president’s office said in a statement, but is to be paid for entirely by a 0.1 percent rise in taxes on employees and companies. The decree is expected to take effect in November.

As if France could afford the retirees it has now??

Meanwhile, the only EU economy with annual growth of 7.6% (a whopping FIVE TIMES the euro-zone average) gets dissed by Paul Krugman.

Yes, the death-panels-and-sales-taxes guy whose blog is richly titled The Conscience of a Liberal, who will tell you that “the French have it right” when it comes to healthcare. The very same Krugman who puts to use the good-old “lies, damned lies and statistics”, or, as Bruce McQuain calls it, statistical cherry-picking.

Let’s write about something we know nothing about & be smug, overbearing & patronizing: after all, they’re just wogs: krugman.blogs.nytimes.com/2012/06/06/est…

OK, something a bit longer than 140 ch. on why we might be a bit peeved. No argumentum ad auctorem: not where but why: hoover.org/publications/p…

And maybe, just maybe, you’ll see why austerity may be what has made Estonia grow.

Estonia and Austerity: Another Exploding Cigar for Paul Krugman

Prof. Paul Krugman’s New York Times column of March 27th, “American Thought Police,” made this startling assertion: “the hard right — which these days is more or less synonymous with the Republican Party — has a modus operandi when it comes to scholars expressing views it dislikes: never mind the substance, go for the smear.”  What would Dr. Freud say?  Well, after careful study of Prof. Krugman’s works and one trip to the couch, Dr. Freud diagnosed the patient and proclaimed, “projection bias.”  Yes, the ace of the ad hominem smear is simply projecting his own attributes and habits of mind and deed to others.

Speaking of “go for the smear”, read about The Paranoid Style in Liberal Politics
The left’s obsession with the Koch brothers. A lengthy article which illustrates at what lengths the Left will go.

Paul Krugman must have been reading Trollope’s The Fixed Period, at least the part about avoiding the decrepitude and expenses of old age:

People need to get a little bit of reality therapy. There’s going to be another dose coming on Wednesday when another group is going to submit their recommendations, very concrete recommendations about how to do it. That’s the conversation we need to have before we start picking apart solutions.

If it’s not even — if the commission isn’t even brave enough to take on the death panels people, then it’s doing no good at all. It’s not educating the public. It’s not telling people about the kinds of choices that need to be made.

CHRISTIANE AMANPOUR, HOST: But what is going to happen? I mean, are you clear on where a compromise is going to be? It’s got to be discussed before the end of the year, no?

KRUGMAN: No. Some years down the pike, we’re going to get the real solution, which is going to be a combination of death panels and sales taxes. It’s going to be that we’re actually going to take Medicare under control, and we’re going to have to get some additional revenue, probably from a VAT. But it’s not going to happen now.

Death and taxes: the progressive answer to every problem?

Back in 2003 15,000 elderly and infirm people died during a heat wave in France, many of them while waiting in hospital emergency rooms. The government-provided “free healthcare” has been, and continues to be, a disaster. Currently, 10,000 people die every year of “medical accidents”, and there are an estimated 300,000 to 500,000 “serious undesirable events” i.e., errors per year.

Erik Svane of No Pasarán has been following the story here and here.

The original article (in French) first came out at JDD on January 10, and the numbers were quoted by Dr. Philippe Juvin,, professor of anesthesia and head of the emergency room at Beaujon Hospital. Dr. Juvin is also national secretary for health for the UMP party.

Just so you know.

President-elect Barack Obama has offered the job of surgeon general to Dr. Sanjay Gupta, the neurosurgeon and correspondent for CNN and CBS, according to two sources with knowledge of the situation.

Gupta has told administration officials that he wants the job, and the final vetting process is under way. As it turns out, Gupta is very qualified for the job. In addition to his impressive CV, Krugman doesn’t like him, because Gupta doesn’t like Michael Moore:

But I do remember his mugging of Michael Moore over Sicko. You don’t have to like Moore or his film; but Gupta specifically claimed that Moore “fudged his facts”

Sounds good to me.

Krugman’s link — at “mugging” — goes to a USA Today article about the conflict, which mainly dealt with the amount of money spent on medical care per person in the United States compared to Cuba. You can see Gupta and Moore having it out on the Larry King show on video here or read the transcript here. The fact that Gupta actually did get some numbers wrong overshadows the policy dispute: Moore wants the government to pay for all medical care for everyone, and Gupta thinks Moore might be right, but that things are more complex than Moore will admit.

It’s true, as Krugman says, that Moore comes across as an uncouth outsider and that we tend to feel an instinctive aversion to him. And Gupta is couth, an expert at projecting competence, expertise, and level-headedness. And Krugman is right that the uncouth speaker may be right when the couth speaker is wrong. On this occasion, Gupta got some things wrong, and where he was wrong, he quickly and clearly corrected himself and apologized. That’s part of the couth style. So where is this “lack of accountability” that Krugman talks about? Gupta didn’t get away with mistakes by speaking “in a socially acceptable way.” Gupta was immediately called to account, and he stepped up to it.

And what of Moore? Is he accountable? Moore may have not been wrong on this occasion, but he’s been wrong in the past about plenty of things, and his entire filmmaking style is based on a strong point of view — that is, bias — that involves distortion and emotive exaggeration. Does Moore make corrections and apologize? He method involves going doggedly forward toward his predetermined goals — like government-managed health care or opposition to the war or gun control.

On a related subject: As readers of this blog know, the so-called excellent Cuban healthcare is in such shambles that Cubans who have no dollars or access to foreigners-only clinics have to procure and bring their own suture thread to the hospital before they can have surgery. 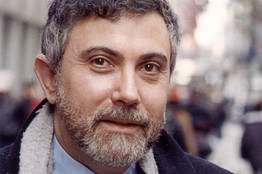