My article on HR2499, the Puerto Rico Democracy Act, is up at Pajamas Media

I believe it was Nietzsche who proposed a theory of eternal recurrence, where you are living and re-living the life you live now to all eternity. Congress, by passing HR 2499, the Puerto Rico Democracy Act, may have accomplished the political equivalent.

My article on HR2499, the Puerto Rico Democracy Act, is up at Pajamas Media

I believe it was Nietzsche who proposed a theory of eternal recurrence, where you are living and re-living the life you live now to all eternity. Congress, by passing HR 2499, the Puerto Rico Democracy Act, may have accomplished the political equivalent.

Since I briefly worked for Pajamas Media in 2007, I have received a number of emails today asking my reaction to the news that Pajamas Media is dropping the bloggers ad network.

While Pajamas Media has published several of my articles, I haven’t been affiliated with them, or have been listed in their blogroll since I dropped their ads last year.

At the same time, I find no pleasure in either publically saying bad things about a former employer, or seeing several of my friends lose a source of much-needed revenues.

Airing at 6:30PM Eastern, and archived for your viewing pleasure!

I’ll be in the Pajamas TV Whip this evening at 7PM Eastern with two of the wittiest, most handsome bloggers around, Stephen Green and Scott Ott of ScrappleFace. Whoot!

And no, this blog is most definitely NOT written by a man (h/t Don Suber via Larwyn). Watch PJTV and see for yourself. 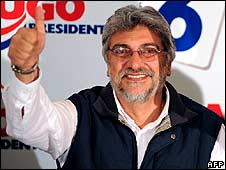 From the looks of it, Paraguay’s new president Fernado Lugo is Hugo Chavez’s latest buddy. As you can read in Bridget Johnson’s article, Latin America’s Latest Marxist Leader Takes Power in Paraguay, Marxist former Bishop Fernando Lugo is the latest of Hugo’s friends to come to power with the help of Hugo’s oil money. He joins Nicaraguan President Daniel Ortega, Bolivian President Evo Morales, and Ecuadorian President Rafael Correa in the choir paid for by Hugo’s money. And I’m not including those suitcases full of money Hugo was sending Argentina’s Cristina Kirchner.

This means the least competitive economy in South America is now in Chavez’s pocket.

Paraguay has elected former Catholic bishop Fernando Lugo in spite of the fact that the Paraguayan constitution prohibits ministers of any faith from standing as a political candidate. Lugo claims to have resigned from his position, but unfortunately for him, the Catholic Church isn’t amenable to resignations by ordained clergy since ordination is a Sacrament and carries a lifetime commitment. He may be defrocked.

Here is Lugo’s BBC profile, which says that Lugo’s ready to put the squeeze on Brazil:

In particular he wants Brazil to pay Paraguay a lot more money for the electricity it buys from their jointly-owned Itaipu dam, the world’s biggest hydroelectric plant. He says he will take Brazil to the World Court in The Hague if necessary.

He also wants to establish relations with China

They are protectionists, rejecting Washington’s proposals for free trade throughout the Western hemisphere, and preferring to build up a South American bloc as a counterweight to Nafta.

They are populists, using public projects to buy support. They are nationalists, picking fights with the US, the World Bank and, when all else fails, each other.

They are, if not anti-democratic, at least anti-parliamentary, articulating their peoples’ contempt for politicians: Bonapartists, if you like.

Monsignor Lugo fits the mould neatly. He is a brilliant orator, whether in Spanish or in the indigenous language, Guaraní.

While he recently tempered his anti-yanquismo, he none the less attacked Washington’s unhappy record of backing dictators. And, for all his ideological proximity to Brazil’s leader, Luiz Inácio Lula da Silva, he played on anti-Brazilian nationalism.

Lugo’s victory completes the triumph of the radical Left in South America.

The Latin Business Chronicle urges Lugo to follow Chile’s example because of the dismal economic conditions after sixty-one years of Colorado party rule:

Paraguay needs to follow Chile’s – not Venezuela’s – example as a way to reduce the country’s poverty and corruption.
…
First and foremost, Lugo should realize that Paraguay’s status as the poorest nation in South America is not due to Capitalism, but rather the lack of true free markets. Even after Paraguay became a democracy nearly 20 years ago, the country continued to be dominated by corruption and the rule of influence instead of transparency and the rule of law.

Paraguay has the least competitive economy in all of Latin America, according to the 2007 Global Competitiveness Index from the World Economic Forum. It ranks 121 worldwide among the 131 nations the survey looked at. Its low rank was due to such factors as weak institutions, inefficient infrastructure, insufficient macro economic stability, little innovation and low technology readiness. Paraguay is among the countries with the lowest Internet and fixed telephony penetration in Latin America, according to the 2007 Latin Technology Index published by Latin Business Chronicle, which ranked its overall technology level at 15th out of 20 nations in the region.

Meanwhile, the Milken Institute says that Paraguay ranks as the second-worst in Latin America when it comes to access to capital for entrepreneurs. Only Haiti ranks worse, according to the Capital Access Index released in February. Paraguay ranked in 94h place out of 122 nations worldwide.
…
Transparency International gave the country a score of 2.4 (with 10 being best) on its 2007 survey of corruption perception. That makes Paraguay the fourth-most corrupt nation in Latin America.

Lugo will be following Chavez’s example,

n contrast, the radical-populist policies implemented in Venezuela, Bolivia, Nicaragua and Ecuador have increasingly deterred foreign investment and in most cases spurred even more poverty. Corruption has also been growing. Venezuela’s international ranking has fallen from 71st place (out of 90 nations) in 2000 – when Chavez became president – to 162nd place this year (out of 179 nations), according to Transparency International. Only Haiti is more corrupt in Latin America.

Unfortunately there possibly are dire consequences in the region’s security, since Paraguay has significant organized crime and terrorist activity in the TriBorder Area (TBA), which continues to show in the terrorist radar where meetings attended by Hezbollah and al-Qaeda have recently taken place.

I’ll be in NYC for most of today, but Pajamas Media will be posting my latest on Nancy Pelosi and the Colombia Free Trade Agreement.

More posting after I get back from New York.

By eliminating the deadline for ratification, Nancy Pelosi proves she is willing to endanger the security of the continent just to show that Democrats are the ones in charge