The big news of the week: Mexico finally released Marine Sgt. Andrew Tahmooressi, after holding him in jail for seven months on gun charges – and how perfectly timed!

AND JUST BEFORE THE ELECTION, TOO. HOW NICE! Mexico Grants Humanitarian Release to Marine H… http://t.co/my0vSjsqG3 via @instapundit

Argentina’s Disturbing New Low
In avoiding its debts, the country gambles with contempt and faces the discipline of international markets.

BOLIVIA
Freddy Mamani: ‘New Andean’ architecture is turning Bolivia into an electric wonderland
A young pioneer has declared war on the dull and colorless. You might want to reach for sunglasses.

Female Brazilian murderers marry – and refuse to be separated – in jail
Suzanne Von Richthofen was 18 when jailed in 2002 after arranging for her parents to be killed in their luxury home
They were both behind murders which shocked Brazil, but Suzanne Von Richthofen has turned down parole to stay in Sao Paulo state prison with Regina Sanchez after the pair fell in love and married behind bars

Despite the intransigence of the FARC and the opposition, the peace process is still alive

Russell Brand’s Revolution For Morons
The movie star’s political manifesto is full of mistakes, misquotes, and is utterly misguided, unfunny, illogical, and unreadable. Watch the copies fly from the shelves.

Indeed, Brand proclaims himself “a big fan of [Fidel] Castro and [Che] Guevara” because “they were sexy, cool, tough” and the fetid autocracy they imposed on the Cuban people “was a remarkable success in many respects.” (Fidel is also described as being “double cool” for a four-hour, filibustering courtroom speech, while Che Guevara is described as a “dear, beautiful, morally unimpeachable” revolutionary.)

And what were those successes, in a country that routinely ranks as one of the least free countries on the planet? “Education for everyone, land sharing, emancipation of women, and equal rights for black Cubans.” This latter achievement would come as a welcome surprise to black Cubans, who are second-class citizens—equal only in the sense that, like all Cubans, they too have no rights. And yes, education is for everyone—provided they want to read wooden agitprop about how education in Cuba is for everyone.

Of which Fidel boasted, claiming “Cubans are the most cultured people in the world.”

. . . thorny political, economic and cultural factors have conspired against Dominican motorists. The government’s nominal motorcycle-helmet and seat-belt laws apply only to drivers, not passengers, and enforcement of speed limits and drunk-driving rules is lax. The WHO report scored its efforts in those areas just a three and a two out of ten. Less than 10% of tickets issued for vehicular infractions ever get paid, and drive-through liquor stores and alcohol sales at petrol stations expose drivers to constant temptation. Unions representing bus and taxi drivers have opposed proposed bills that could expose them to new regulation.

JAMAICA
The Asianisation to Jamaica

MEXICO
Mass Graves, Murderous State-Cartel Alliance Revealed in Guerrero
Hundreds of Bodies Found Near Iguala, Mexico, But Not the 43 Students

Crisis in Mexico: Could Forty-Three Missing Students Spark a Revolution? Revolution against whom?

PACIFIC ALLIANCE
Looking to “Doing Business” in Latam, try the Pacific Alliance, forget Mercosur
The World Bank’s “Doing Business” global rating is not very enthusiastic about Latin American and the Caribbean which only first surfaces in position 34 out of the 189 countries considered.

PARAGUAY
The Place Where Rutherford B. Hayes Is A Really Big Deal

Puerto Rico Government Looks to Raise Tax on OilLegislators filed a measure Thursday that could raise the excise tax on a barrel of crude oil from $9.25 to $15.50, to generate $178 million a year. It also would allow the Highway and Transportation Authority’s loan to be transferred to Puerto Rico’s Infrastructure Financing Authority, which is authorized to issue bonds

URUGUAY
Uruguay registers cannabis growers
The Uruguayan government announces the start of registration for licensed cannabis growers as part of its plan to legalise the drug.

The week’s posts and podcast:
Bad news for Chile

Mexico: Tahmooressi released, back in US

Brazil: The election was tweeted

Whatever happened to the Carnival Magic with the ebola scare?

Imagine the two foremost figures of Latin American letters having a conversation on the politics of the region, and you being able to listen. Well, that was the scene last night at 50 McCosh on the Princeton University campus. “Latin America is improving. We have more democracy; we have large consensus on what kind of economic policies we need to develop and become modern and successfully fight poverty,” Vargas Llosa said, adding that the transformation of most Latin American nations in recent years has been formidable. “Poverty has diminished; in statistical terms, the poverty level is still large, but the way which the middle classes have been grown in the country is fantastic.”

Vargas Llosa cited Uruguay’s economic success as a model for the rest of Latin America. He said that the country has seen very liberal social reforms, including gay marriage and gay rights. “Not liberal in the American sense,” he added to the audience’s laughter.

Krauze is not as optimistic on Mexico, pointing out the country’s recent lack of economic growth and the absence of a moderate left.

I had the pleasure of asking what the Pacific Alliance may mean for the hemisphere . Vargas Llosa said it will be the only alliance that will endure; Krauze pointed out “best yet, like the name says, it’s pacific”.

It was a splendid evening, bringing many insights from two of the greatest minds in the contemporary world. 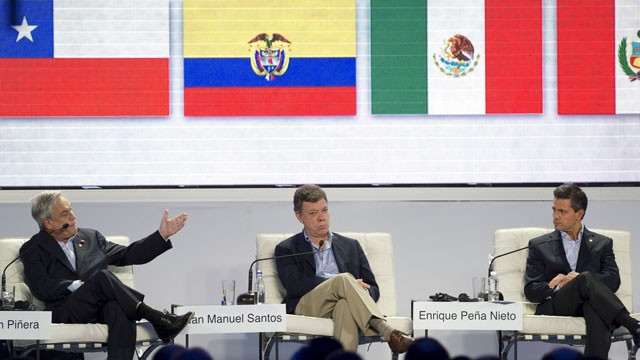