Latin America’s not the only source for bizarre news.

88-year old Frank Lautenberg (Senator for my district), who went back to the Senate in 2003 thanks to the Torricelli maneuver, is upset enough at the prospect of Newark mayor Corey Booker challenging for the seat that he let it rip,

“I have four children, I love each one of them. I can’t tell you that one of them wasn’t occasionally disrespectful, so I gave them a spanking and everything was OK,” Lautenberg said with a smile in his first public comments since Booker announced he was considering a run for Senate.

This statement is wrong in so many levels (and he gets away with the obvious because he’s a Democrat), where to start?

By asking, “you and who else, Frank?”

On this corner we have 88-year old walking-with-a-cane Lautenberg.

On the other corner we have 43 year old Booker, fit enough to run into a burning house and pull a woman to safety.

It would make a heck of a fundraiser.

Booker may be “entitled to run”, but Lautenberg’s the one who can’t hide.

I voted at Princeton University’s Jadwin Gym earlier today, where six other districts were moved due to the hurricane damage (the local schools were closed until yesterday, when electricity was restored).

Turnout seemed good for the time of day, but there were no lines.

tested “@urbanjibaro: RT @abbyce: NJ voters can text “WHERE” to 877877 to find out where to vote on Election Day #Election2012 @urbanjibaro”

I tested the above text and it is correct as of the writing of this post.

In Princeton, check the Township and the Borough websites.

In Princeton: the John Witherspoon school

In Plainsboro: Got an email from a friend,

Princeton Plasma Physics Lab has opened its cafeteria and locker rooms to the public until 8pm tonight. They are offering heat, hot showers, phone and laptop recharging, wifi, vending machines, microwaves and CNN.

Scudders Mill Rd to Campus Drive to Stellarator Drive (!!!) to the guardhouse where you show id. They have staff to direct people to the cafeteria.

Public Service Electric and Gas crews of 3-4 trucks are working street-by-street. The traffic lights from Princeton to Kingston on Lincoln Highway (Rt. 27) are now working.

Fortunately the electricity at casa de Fausta’s back on.

At the same time that PSE&G is working, several other crews from private tree services are clearing the hundreds of fallen trees, so many roads and local streets are blocked. Downtown, Van der Venter is still closed by the movie theater.

All the public schools remain closed until Monday.

All things considered, we are blessed to have come through with relatively minor damage.

Downtown is the only part of town with electricity; the only traffic lights that work are downtown on Nassau street, from Harrison to Marquand park.

The Sunoco on Nassau street, and the Getty and Gulf onn Rt 1 & Washington Avenue are open, with very long lines.

McCaffrey’s is the only business open at the Princeton Shopping Center. All others, including the pharmacy, are not. The traffic lights in that area don’t work and some of the streets are blocked. I didn’t see any workers.

Many, many fallen trees and downed electrical lines have not been repaired, including on the street where I live. You’re better off staying away from the area.

I urge anyone who’s able to donate or volunteer to the Salvation Army.

Thousands are homeless in NJ. Obama had his photo op with Christie, and headed west.

The reports on New York City are horrible. Bloomberg is going ahead with the Marathon tomorrow, even when Staten Island is in desperate need.

The NY Post has the photo of the generators,

UPDATE,
Bloomberg cancels marathon; let’s hope the generators are on the way to where they’re most needed.

On Easter Sunday this year, aircraft records obtained by TheDC show that Melgen’s plane left Florida the morning of Easter Sunday, stopped at the Teterboro private airport near Menendez’s home in New Jersey, and flew on to the Dominican Republic.

Two days later it returned to the United States, from a private airport near Casa de Campo.

While he was there,

In interviews, the two women said they met Menendez around Easter at Casa de Campo, an expensive 7,000 acre resort in the Dominican Republic. They claimed Menendez agreed to pay them $500 for sex acts, but in the end they each received only $100.

You would think that politicians would know by now that they ought to pay hookers.

Sen. Menendez was interviewed by NJ Today Online and was asked about what the consequences should be for the secret service agents who were involved in the sex scandal in Cartegena, Colombia.
(video above cue at 1:54)
He answered, “If the facts are true, they should all be fired. The reality is is that the secret service not only protects the president of the United States, they represent the United States of America. They were on duty. If the facts are true as we are reading in the press, they shouldn’t have a job.”

The sex part is not the big issue,

1) Prostitution is legal in the Dominican Republic. This doesn’t make it right or any less sleazy, but it takes away the most vivid “senator accused of illegal acts” angle. Although I suppose paying only 20 percent of what you promised could get you in legal trouble…

2) Menendez is not married.

3) Most New Jersey residents have much bigger issues on their minds right now, thanks to Hurricane Sandy. In fact, this might be the very best possible time for this story to break for Menendez.

What I want to know if Menendez reports the free vacation(s) and free use of Salomon Melgen’s private jet.

but you wouldn’t know it if you owned property near the shore. 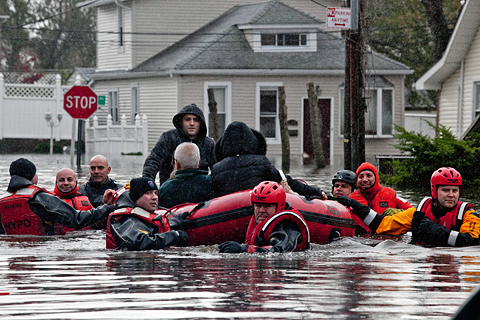 And then there’s this.

Things at home are unharmed, & I’m so pleased!
No heat, no electricity, but OK.

Thank you for all your prayers.