… took place just as I was finishing my shift. I posted immediately that at the time (7PM Estern), there were no injuries reported. 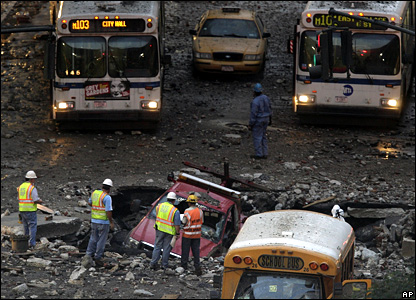 Unfortunately, this morning we know there was one death and 30 injuries, two of them critical. Considering the location – near 41st Street and Lexington Avenue – and the time of day, it is a miracle that it wasn’t worse.

CNN and the BBC have photo slide shows, and they are all too reminiscent of the 9/11 images that are so engraved in our minds. 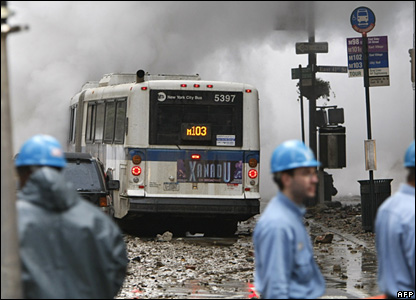 Fortunately, the explosion was not caused by an act of terrorism but by a steam pipe explosion, which have occured before

Manhattan is home to the largest district steam system in the world, according to the Web site of the city’s Economic Development Corp. While most of the city’s buildings have on- site boilers to provide heat during the winter, the Con Edison Steam Business Unit heats 1,800 buildings, serving more than 100,000 commercial and residential customers through a series of underground pipes running from the Bowery in lower Manhattan to 96th Street.

Consolidated Edison’s steam network links many end-users to central power plants through a network of pipes carrying either steam or heated/cooled water under high pressure. The New York Steam Co. began providing such service in lower Manhattan in 1882.

The 83-year-old pipe exploded just before 6PM, right in the middle of rush hour, when cold water reached the hot steam pipe.

The WaPo has video of the scene.

As it turns out, Penn and Teller had addressed the 9/11 conspiracy theories in their program, Bullsh*t (language not suitable for work):

Why was I thinking about this today?

Because this was the first thing I saw when I turned on the TV this morning:
Traffic mess coming to Lower Manhattan

Starting next week traffic in and around Lower Manhattan is about to get a whole lot worse.

The northbound side of West Street between Liberty and Vesey Streets will be shut down for more than a month so that crews can search for the remains of more 9/11 victims.

Think about that, folks. FIVE AND A HALF years later, there are remains out there that still need to be found and laid to rest.