One for the “no sh*t, Sherlock” file:
Money can buy one form of happiness, massive global study concludes

Life satisfaction was directly and strongly correlated with income, with the impact felt equally among all ages, men and women, and rural villagers and urban dwellers in virtually every corner of the globe, the researchers reported in the Journal of Personality and Social Psychology.

Moose in the news:
It turns out that the Beeb is a great resource for moose news.

An American student is suing her university for negligence after a mounted moose head fell on her from a wall during a biology exam.
Amy Walters was peering through a microscope when the stuffed trophy fell, hitting the side of her head.

She says she has suffered from headaches ever since, and is suing for “loss of enjoyment of life” and “embarrassment and humiliation”.

Because propelling herself into the limelight by suing won’t increase the “embarrassment and humiliation”, won’t it?

More Moose, but of a different kind 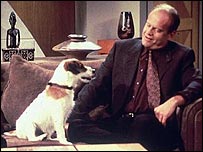 Meanwhile, in the great outdoors,
A 65-year-old Californian woman has saved the life of her husband, 70, by fighting off an attacking mountain lion with a small log and his pen.

Which is why I don’t go camping.