“Would a reasonable person be offended by this image?“ 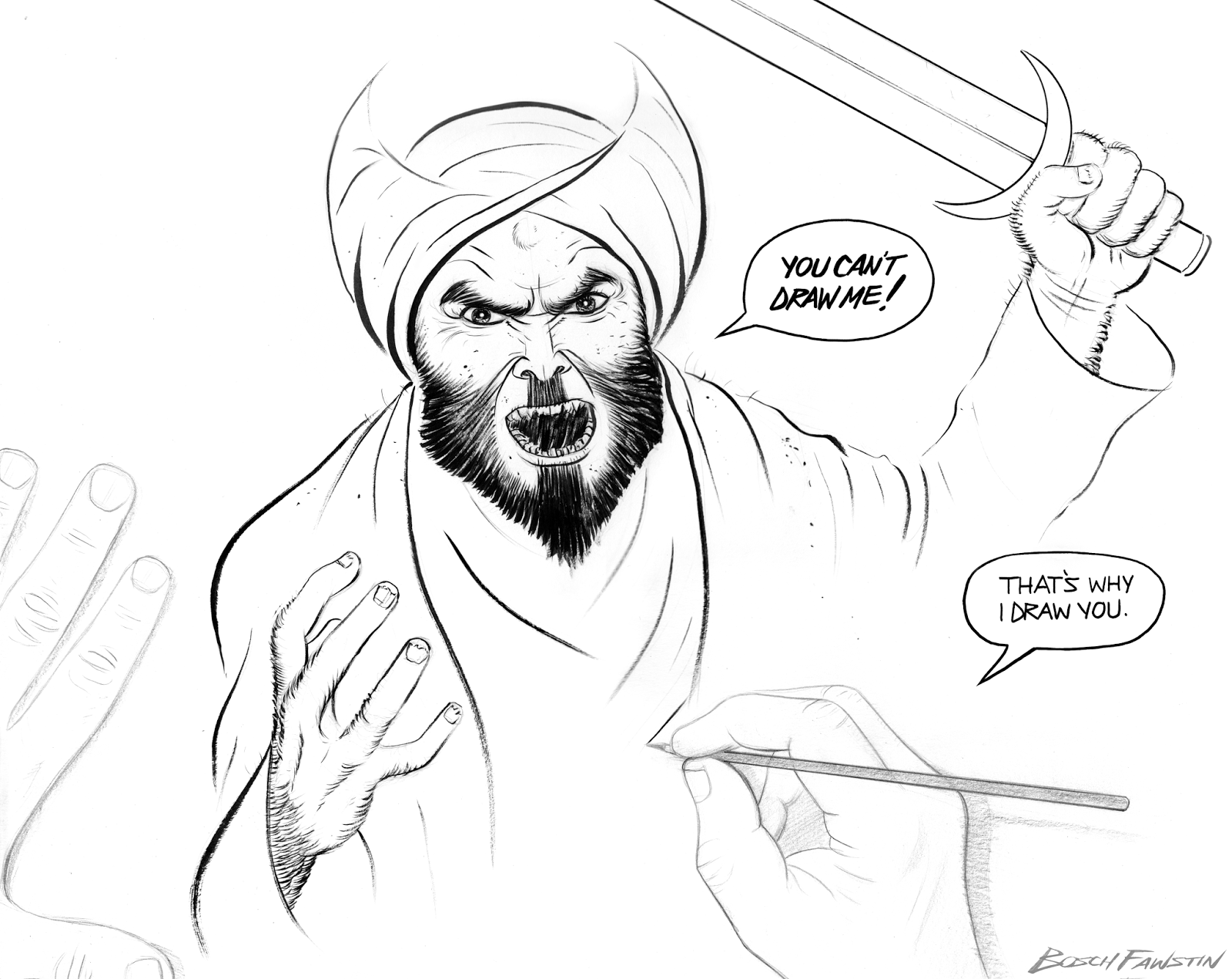 Fundamedios, an NGO that advocates for free speech in the country, reported on Wednesday, March 4, that El Universo received a written statement in its readers mailbox titled, “A warning to the cartoonist Bonil.”+

It was signed by a person identified as José Muñiz, who claims to be a 22-year-old Ecuadorian citizen, student of Islam, and member of the Islamic State (ISIS).

Here’s the cartoon that has Muñiz’s panties in a bunch:

Bonil’s cartoon, titled “Fundamentalism and Barbarism,” was published on Sunday, March 1, in El Universo: “Let’s put an end to cultural expressions of the infidels!” “By Allah! The internet is slow … I cannot submit our video to Twitter and Facebook.” Brian Preston writes about Taqiyya: WikiLeaked Docs Reveal Syria’s Role in the Cartoon Riots
Orchestrated chaos to serve political ends. Plus: Taqiyya: The Movie!. Taqiyya means deception, and that it was,

The cartoon riots were a trick, perpetrated by unscrupulous imams and their backers, for the purpose of intimidating the West into adapting Islamist codes of speech policing, and for the purpose of generating fear and loathing of the West up and down that fabled Islamic street.  It all worked quite well, thanks in no small part to the Western media’s cowardly behavior throughout.

Now, to the incriminating doc concerning Syria.  At the time of the riots, it was fairly obvious that various and sundry despots around the Middle East were using the Danish cartoon controversy for their own ends.  Syria’s hands were bloody, as they tend to be in any crisis.
…
Here’s where the real taqiyya comes into play:

(C) xxxxxxx assessed that the SARG allowed the rioting to continue for an extended period and then, when it felt that “the message had been delivered,” it reacted with serious threats of force to stop it. He described the message to the U.S. and the broader international community as follows: “This is what you will have if we allow true democracy and allow Islamists to rule.” To the Islamic street all over the region, the message was that the SARG is protecting the dignity of Islam, and that the SARG is allowing Muslims freedom on the streets of Damascus they are not allowed on the streets of Cairo, Amman, or Tunis.

Notice the dual messages.  To the West, the riots were orchestrated and intended to send the West a message: Leave us despots alone or you’ll get nothing but chaos.  The Syrian Ba’ath Party had every incentive to send that particular message to a United States that had just toppled the neighboring Ba’ath dictatorship in Iraq.  Assad didn’t want to end up like Saddam.  To those who embodied the chaos, the rioters themselves, Assad sent a different message: We, the secular Syrian government, are your guardians from those nasties in the West.  Trust us to keep Islam pure.

Go read the rest of the article, while bearing in mind that the cartoonists are living in hiding.

One man was killed and two other people were injured when two explosions hit the heart of Stockholm’s city-center shopping district on Saturday evening, the police in the Swedish capital said. The country’s foreign minister called the blasts a terrorist attack, and an e-mail to news organizations minutes before the blasts seemed to link them to anger over anti-Islamic cartoons and the war in Afghanistan.

The police said that a car parked near the busy shopping street of Drottninggatan exploded first, shortly before 5 p.m. Stockholm time, and that the wreckage of the vehicle included gas canisters. A second blast followed minutes later, and about 200 yards from the first. A man’s body, with blast injuries to his abdomen, was discovered after the second explosion.

Swedish newspapers portrayed the dead man as a suicide bomber, and the newspaper Aftonbladet said on its Web site that he had been carrying pipe bombs and a backpack full of nails. But the police declined to confirm this.

The recorded message sent to Swedish news organizations demanded that Muslims in Sweden “stop sucking up and degrading yourselves,” and broadened the appeal to “all mujahedeen,” or holy warriors, in Europe. “Now it’s time to attack,” it said. “Do not wait any longer. Come forth with whatever you have, even if it is a knife, and I know that you can bring more than knives. Fear no one. Do not be afraid of jail. Do not fear death.”

Gates of Vienna is covering the story in detail, with video,

and posts,
Six Pipe Bombs — How Many Exploded?
Confirmation From the Local
Gas Canisters for the Bystanders, Pipe Bombs for the Perp
Who Was the Stockholm Bomber?

About 10 minutes before the explosions an e-mail was sent to TT [news service], and also to the Swedish secret services (Säpo), where a man addresses “Sweden and the Swedish people”. He refers to the Swedish silence concerning Lars Vilks’ paintings, the Swedish soldiers in Afghanistan and says that “now your children, daughters and sisters will die as our brothers and sisters and children are dying”.

“Our actions will speak for themselves. As long as you continue to wage your war against Islam and insulting the prophet and your stupid support of the pig Vilks,” says the man.

Whereupon he encourages all Muslims in Sweden to “stop sucking up and debasing yourselves”. He ends the message with another exhortation to “all the mujahideen in Europe and Sweden”:

“Now is the time to attack, do not wait any longer. Come forward with whatever you have, even if it’s just a knife and I know you have more than just knives. Do not fear anyone, do not fear jail, do not fear death.”

It is not clear from the audio files if the man speaking belongs to any organization. But he states that he has been in the Middle East and asks his family to forgive him for having lied to them.“I never went to the Middle East to work or make money, I went there for jihad,” he says.

Säpo has not confirmed the contents to TT or confirmed having received the mail, which contains sound files where both Swedish and Arabic are spoken. TT has not been able to confirm that the mail is related to the explosion.

The car was registered to an “Abdul T”.

A witness who tried to give the man CPR says he removed the man’s Palestinian scarf while doing so. The man apparently had a whole bag of explosives

For prior posts on the Mohammed Cartoons, click here

As of the writing of this post, 93,000 people support it on FaceBook, as the page’s creator faces death threats.

After receiving a few death threats myself, from Pakistan ISPs in the comments section, here’s the Mohammed Image Archive, and today’s roundup:

And a bonus,
Opinion: Everybody Draw Ahmadinejad Day!

And…
Thousands of Mohammed images uploaded on Facebook
Thousands of provocative images of the Prophet Mohammed have been uploaded to the social networking site Facebook, sparking a fresh wave of outrage in Pakistan.

UPDATE, Friday 21 May,
Facebook caved in and took down the page.

As you can see from the google cache, (click on image to enlarge) over 106,000 people had joined.