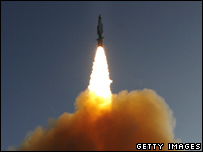 A missile launched from a Navy ship successfully struck a dying U.S. spy satellite passing 130 miles over the Pacific on Wednesday, a defense official said.

The BBC has a video on how the missile successfully brought down the satellite. The BBC reports that

Operatives had only a 10-second window to hit the satellite – USA 193 – which went out of control shortly after it was launched in December 2006.

During this morning’s press conference General James Cartwright, Vice Chairman of the Joint Chiefs of Staff, gave details on the mission.

Monsters and Critics has information on the components. Central command was in Omaha. Several bloggers have commented that this was the hardest way possible to do the job, which I am sure the Russians and the Chinese have noticed, too, since the missile and the satellite had a closing speed of 22,000 miles per hour 130 miles over the Pacific, the satellite was the size of a school bus, and the launch was from a relatively small Navy ship in the middle of the ocean.

Richard Fernandez writes about what the launch means.

Moe Lane is rather more direct:

Anyway, note that it’s just “a Navy ship.” That means that the next Navy ship that you meet just might be one of the ones that can take out things in orbit. Best not to mess with her on general principles, no?

The Tension has photos (h/t Ben)

UPDATE
A Consensus of Scientists Say…
Ace has the video: