Like something out of Breaking Bad, only adding cocaine and heroin, the top law enforcement official in the state of Nayarit, busted on drug charges:

Federal agents in San Diego have arrested the attorney general for the Mexican state of Nayarit on charges that he conspired to smuggle heroin, cocaine and methamphetamine into the U.S.

Edgar Veytia, 46, was detained Monday at the U.S. border in San Diego on an indictment handed down by a grand jury in New York, Ralph DeSio, a spokesman for U.S. Customs and Border Protection, said Wednesday.

The indictment was filed March 2 in the Eastern District of New York — the same jurisdiction where federal prosecutors have charged Sinaloa cartel commander Joaquín “El Chapo” Guzmán — and a U.S. magistrate judge in Brooklyn unsealed the charging papers on Tuesday.

Veytia allegedly was affiliated with the Sinaloa Cartel, and went by several aliases, including Diablo (Devil).

Mexico is one of the world’s most dangerous countries for journalists.

A Mexican journalist was shot and injured early on Wednesday in the eastern state of Veracruz, the state attorney general’s office said, the latest in a spate of attacks against reporters in Mexico.

The 51-year-old news editor at La Opinion de Poza Rica, a newspaper in the violent oil-drilling city of Poza Rica in the drug-ravaged state, was shot outside his home early on Wednesday morning. The attorney general’s office in a statement identified him only as ‘A.A.G.’ but the State Commission for the Protection of Journalists named him as Armando Arrieta Granados.

The Committee to Protect Journalists keeps track of incidents, with Veracruz being the deadliest state.

The makers of Corona, the beer that made Cinco de Mayo a holiday, may have to move out of Mexicali over a water rights dispute:
Mexican Farmers Fight to Oust Border Brewery. Water-rights protesters invoke Trump in effort to get U.S.-owned plant out of Mexico (emphasis added),

Earlier this month, planters clogged the parking lot at the office of the governor of Baja California state with tractors, reapers and other farming equipment. They erected a banner demanding that Mr. Trump stop a large brewery being built here by Constellation Brands—the third-largest U.S. beer producer and the brewer of Corona, the best-selling beer in Mexico—much as they saw him forcing Carrier Corp. and Ford Motor Co. to back away from plans for new facilities in Mexico.

Constellation has begun construction on a $1.4-billion plant in Mexicali that the company says will provide 750 permanent jobs and is crucial to supply growing markets on the U.S. West Coast. None of the beer to be brewed in Mexicali is destined for the Mexican market.

“The government hasn’t spent one peso on improving the state’s irrigation systems but for this project, they’re spending 500 million pesos ($26 million), with most of the water destined for the Constellation Brands plant,” said Nancy Sánchez, who represent Baja California in Mexico’s Chamber of Deputies.

In other news,
They found a 120-foot-long escape tunnel found under Mexican prison

Prison officials in the northern Mexican state said more than two dozen inmates escaped through the underground passageway.. Twelve of the 29 escaped prisoners have been recaptured.

Three Mexican journalists have been murdered this month: Miroslava Breach Velducea, Cecilio Pineda Brito and Ricardo Monlui Cabrera. Monlui Cabrera’s son had been kidnapped and left for dead in 2010.

Grieving Mothers Lead Authorities to Mass Grave in Mexico. Amid soaring violence in Veracruz, Mexico, a group founded by mothers of missing people discovered what may be the country’s largest mass grave. More than 250 skulls have been recovered so far. Horrible:

Last Mother’s Day, a few dozen women, all mothers, marched through the central square of this picturesque port city, demanding local authorities find family members who had disappeared, suspected victims of the country’s drug violence. Suddenly, two men dashed out of an SUV, ran up to the women, and jammed crudely drawn maps into their hands.

The maps pointed to a field just off a main highway near a gritty housing project a few miles outside of town. One corner of the map was covered by a forest of crosses. “Bodies,” the map said, with an arrow pointing to the crosses.

And, if that was not horrible enough, it was the women themselves who hired the diggers and had to persuade forensic authorities to look into it while body parts kept turning up. In an area where bodies had been dumped for at least the last four years.

Think about that for a moment.

Is that what would happen in a narcostate?

Pedro Huesca, an agent from the public prosecutor’s office who was 29 when he was kidnapped by armed men four years ago, and his assistant, Gerardo Montiel, who was taken the same day.

And by the way, this is not the Ayotzinapa case, where 43 student teachers are missing and only one man’s remains have been identified.

The report produced by the International Crisis Group (ICG), a non-governmental organization that conducts research and proposes policies for dealing with conflict zones, suggests that before Veracruz can be reformed, there is a need to obtain accurate data revealing the full scope of the violence and corruption, and the government needs to do an overhaul of state institutions.

Full report at the link.

There is a television set in the room where Joaquín “El Chapo” Guzmán is allowed to exercise for one hour a day, but it is never turned on: his guards, who aren’t allowed to talk to him, can’t decide what he should be allowed to watch. He spends the remaining 23 hours of each day in a small cell with a bed, a table, a chair, a lavatory and a sink. The light is turned on most of the time. The only time he sees daylight is through a small window in the passage between his cell and his exercise room.

Apparently the MCC is “worse than Guantánamo.” Play me the world’s smallest violin,

While El Chapo awaits trial, he is being kept in complete isolation, and can only talk to his lawyers from behind a glass screen. He has no contact with his wife, Emma Coronel, and she in turn is receiving no news about him. He is unaware of the increasingly bloody power struggle taking place within the Sinaloa cartel in the wake of his extradition, or that Mexican actress Kate del Castillo, with whom he wanted to make a movie about his own life, has a new television series.

But El Chapo will have seen the documents relating to his own case: that a police officer in the Mexico border city of Juárez is to give testimony about the bribes paid to release members of the Sinaloa cartel; that another witness will talk about a house used for killings, the walls of which were covered in plastic and where a special drain had to be installed for the blood to be washed down; that his stash of AK-47s was found, and that several leading Colombian cartel leaders will also be testifying.

No tunnel allowed at the Metropolitan Correctional Center.

The Obama appointees threw a snit. How dare any high-ranking foreign official skip the holy shine of State! State employees are ‘left with literally nothing to do’!

The best and worst places to be a working woman. The Economist’s glass-ceiling index measures gender equality in the labour market 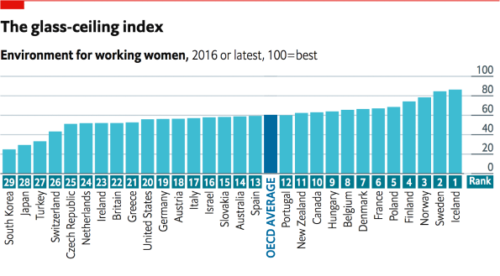 To provide a benchmark for progress on gender equality in the labour market, The Economist has published its fifth annual “glass-ceiling index”. It combines data on higher education, workforce participation, pay, child-care costs, maternity and paternity rights, business-school applications and representation in senior jobs into a single measure of where women have the best—and worst—chances of equal treatment in the workplace. Each country’s score is a weighted average of its performance on ten indicators.

The overall picture painted by the data is that the long trend of improving conditions for working women has flatlined within the OECD, a club of mostly rich countries.

While Chile and Mexico are OECD members, The Economist did not include them in the study.