But did he have the creamed spinach?

Mexico’s media, which have been taking out the sledge-o-matic and going full Gallagher on Donald Trump, are now in a full-froth frenzy.

Mexican President Enrique Peña Nieto had invited both Trump and Hillary Clinton. While it’s possible the Mexican president never expected either to accept the invite, Trump decided to show up anyway.

Prior to Trump’s visit, this week Mexican media had been obsessing over the sudden death of singer Juan Gabriel. The visit erased Juan Gabriel’s name from the headlines, and replaced it with Trump’s. Grief turned into wrath.

while the TV talking heads and newspapers joined in.

There may be five stages of grief, but Mexico’s media have three stages of wrath:

Stage One: Before Trump landed,
The visit was announced late on Tuesday, and the initial reaction was, as it is in grief situations, denial,

“Mexicans invited Trump to visit?!?! BUT WHY?!?! Do they want to find out what the wall will look like?”

Stage Two: The actual visit,
The morning appointment was rescheduled to start at 3pm Mexico time. A few protesters took to the streets to express “indignation, shame and anger,”

“How can the president invite someone to our country who has offended us, who has humiliated us, who has treated us badly as Mexicans?”

“We don’t like him. We don’t want him,” former Mexican President Vicente Fox told CNN. The former president called Peña Nieto a “traitor” for extending the invitation to Trump, who has repeatedly attacked Mexico over the last year and has vowed to force the nation to pay for construction of a massive border wall.

In simple terms, today’s meeting is between 2 of the most despised and hated people by millions of Mexicans on both sides of the border.

Pay close attention to the 21:00 point where the press ask questions. Trump seamlessly took over the question and answer section. Peña Nieto looked like he had been hit with a 2 x 4 on the side of the head.

Stage Three: The aftermath,
Trump was already in his plane flying to Arizona by the time Peña Nieto roused himself enough to tweet that Mexico’s not paying for the wall:
“From the start of the conversation, I made clear that Mexico will not pay for the wall.”

Open-borders activist and so-called journalist™ Jorge Ramos is crying bitter tears. In today’s WaPo,
Jorge Ramos: Peña Nieto was meek with Trump. Latino voters in the U.S. won’t be. He questions the timing,

The timing for the hurried meeting was completely off: It was just hours before Trump’s speech on immigration in Phoenix, and just one day before Peña Nieto’s State of the Union address. Not only that; Mexicans are still mourning the death of a musical legend, Juan Gabriel.

Because matters of state should take second tier to pop singers? At least Ramos reminded his audience (emphasis added)

(A disclosure I’ve made before: My daughter, Paola Ramos, works for the campaign of Hillary Clinton, Trump’s Democratic opponent.)

“Trump should have never set foot on Mexico. I’m now listening to him [speak] against immigrants. Our “friend’s” fascist essence has never been clearer.”

Krauze’s son, León, who is currently promoting his new book on Mexican immigrants to the U.S. (most are undocumented), this morning admits that Donald Trump went to Mexico and won – begrudgingly, since according to him,

International bullying got the presidential seal of approval.

Trump went to Mexico, and perhaps what the pundits fear most is that “The world is run by those who show up”, and Trump did.

Trump’s not even president and he has gotten Mexico to agree to “improve” NAFTA! Not to mention, of course, that Peña did not reject the idea of a wall to protect “both countries.”

It’s a long primary season, but we can enjoy it by promoting the culture that fosters conservatism: Read my article, Evan tours, Klavan’s back, Ed has a book, hit Da Tip Jar.

The ever-affronted strive to keep the twit in Twitter.

Read my article, Stephen Fry and the bag lady.

Doctors’ union in Rio has warned that Olympic visitors will not get medical attention if they fall sick during 2016 games. Some major hospitals have been forced to close while even the most seriously ill patients cannot be admitted because of a funding shortfall

CHILE
Thousands of squid wash up on Chilean shore

MEXICO
The Manhunt for the Drug Kingpin El Chapo. Joaquín Guzmán Loera’s meeting with the movie star Sean Penn gave the authorities the break they needed to help recapture him. 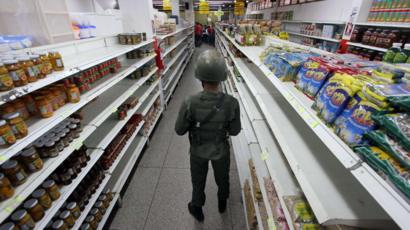 The Venezuelan government announces a 60-day economic emergency to deal with the country’s worsening crisis.

Venezuela’s First Lady criticises America for ‘kidnapping’ her relatives and charging them with trafficking. Cilia Flores, wife of President Nicolas Maduro, has spoken for the first time about the arrest of her relatives on charges of plotting to traffic 800kg of cocaine into the United States

The bottom line:
In the battle of the egos, they each got out of it exactly what they wanted.

And, by the way, Univision’s influence in the Latino news market is vastly overrated, and it’s not even owned or controlled by Lateenos.

UPDATE
According to this study by the Pew Research Center, 82% of Hispanics consume news media in English, while the number who do so in Spanish decreases. Likewise,

We’ll have Trump for a long, long while, because -among other reasons – he’s useful to the media.

Item 1:
Ecuador Expects $4 Billion in Loans From China in 2015
It is estimated China has committed more than $12 billion in financing to Ecuador between 2009 and 2014 (emphasis added),

Most financing operations from China to Ecuador have been tied to oil sales and several have been backed with presales of crude oil.

The minister said despite the decline of around 50% in oil prices, the Andean country plans to maintain its level of public spending this year, thanks to loans from China, credits from multilateral lenders and governments as well as the selling of Ecuadorean bonds in international markets and domestic debt.

The minister, however, ruled out that the country plans a new bond issue in international markets, citing high interest rates.

In plain words, it sold $750 million worth of junk bonds.

At taxpayer expense, and perhaps a little help from junk bond sales and Chinese loans, too?