Part of the fun of following Latin American news is that they are stranger than fiction. For instance, I first came across this headline at Panam post: Former Brazilian President Lula “Prepared” To Run Again in 2018.

They, in turn, got it from El Nuevo Herald: Lula dice estar “preparado” a ser candidato presidencial en 2018.

I couldn’t believe my eyes.

In another interview (link in Portuguese), Lula looked back nostalgically to his years as president and sighed, “I think the country needs to find its way, to be happy again, to live democratically.”

Lula was indicted five times on corruption-related charges just last year alone. That doesn’t count the evidence presented in court this week, any new charges, or the indictments against his children, his wife, or his associates. As Sabrina Martín correctly points out,

Lula is under investigation in connection with the Lava Jato operation. One investigation is allegedly claims that payments were made for a former Petrobras director’s silence; another is for Operation Zelotes, a framework that favored companies that did not pay taxes, as well as an investigation into influence peddling, and finally for money laundering which allegedly included an apartment on the coast Of Sao Paulo as one of the inducements.

Likewise, Lula is accused of participating in the project of rerouting between 2% and 3% of the value of the contracts signed between state-owned Petrobras and the construction company Odebrecht.

Let’s hope the Brazilian people stay the course fighting corruption and don’t get Lula back on the campaign trail.

Covered by The Telegraph and Sky News.

And a comment,
The security for the funeral must have been very rigorous, but we forget that the UK held Lord Mountbatten’s funeral through the streets of London in 1979 after he was murdered by an IRA bomb (I was in London on the day of his funeral).

And,
“An ordinary woman“?

At The Economist:
Margaret Thatcher
A cut above the rest
As prime minister from 1979 to 1990, Margaret Thatcher transformed Britain and left an ideological legacy to rival that of Marx, Mao, Gandhi or Reagan

Live coverage at the BBC (audio starts right away).

'Towering, divisive, revered'...
Indifference wasn't an option...
'I Can't Bear Britain In Decline, I Just Can't'...
Staunch ally in Cold War victory...
Global champion of free markets...
'The PM Who Changed the World'...
Will be honored with biggest funeral for PM since Churchill...
Tributes pour in...
Leftist Parliament Member Trashes: 'Tramp the Dirt Down'...
CSPAN: THE EARLY YEARS...
In Her Own Words...
Updates... 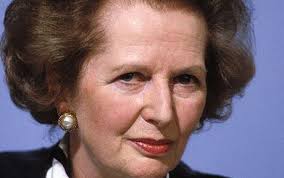 BBC:
Margaret Thatcher dies  —  Former Prime Minister Baroness Thatcher has died “peacefully” at the age of 87 after suffering a stroke, her family has announced.  —  David Cameron called her a “great Briton” and the Queen spoke of her sadness at the death.  —  Lady Thatcher was Conservative prime minister from 1979 to 1990.
Discussion: The Moderate Voice, Shakesville, The Mental Recession, BizPac Review,Mediaite and FP Passport
RELATED:

Telegraph:
Margaret Thatcher dies of stroke aged 87  —  Baroness Thatcher, Britain’s greatest post-war prime minister, has died at the age of 87 after suffering a stroke, her family has announced.  —  Her son, Sir Mark, and daughter Carol confirmed that she died this morning.
Discussion: blogs.telegraph.co.uk, NEWS.com.au, Colorado Peak Politics,Le·gal In·sur·rec· tion, The Week and NBC 5 Dallas-Fort Worth

William Kristol / Weekly Standard:
Three Who Saved the West  —  And now the last of them is gone.  Margaret Thatcher, Ronald Reagan, and Pope John Paul II—three who won the Cold War and, it isn’t too much to say, saved the West (at least for a while!)—are no longer with us.  Their examples remain.
Discussion: Power Line

Joseph R. Gregory / New York Times:
Margaret Thatcher, Who Remade Britain, Dies at 87  —  Margaret Thatcher, the “Iron Lady” of British politics who pulled her country back from 35 years of socialism, led it to victory in the Falklands war and helped guide the United States and the Soviet Union through the cold war’s difficult last years, died Monday.
Discussion: The Caucus, BuzzFeed, The Week and The Hugh Hewitt Show

Congressman Steve Stockman:
Stockman: Thatcher would want us to ‘fight on, fight to win’ and crush liberalismNEW!
Discussion: Business Insider and msnbc.com

Neo-neocon has the details.

Neo-neocon has the details.

The most contrived, planned-ahead political campaign of the last 50 years would do it each and every time if they knew they could get away with it.

But the real issue is how Hillary’s campaign try to play the “poor me” angle (Scrappleface‘s got a great post on that):

“However, Senator Clinton did not know which questioners she was calling on during the event.”

Hillary’s spokesman stops short of saying “the student made me do it”.

It’s always someone else who makes Hillary and her convenient-husband “do it”. Theirs is due all of the credit and none of the blame all-the-time-every-time.

Well, folks, it can’t work both ways. Either you are tough enough to be President of the United States, or you are not.

When Hillary Clinton suggested that debate criticism of her came under the heading of men bullying a defenseless lass, an interesting thing happened. First Kate Michelman, the former head of NARAL and an Edwards supporter, hit her hard. “When unchallenged, in a comfortable, controlled situation, Sen. Clinton embraces her elevation into the ‘boys club.’ ” But when “legitimate questions” are asked, “she is quick to raise the white flag and look for a change in the rules.”

Then Mrs. Clinton changed tack a little and told a group of women in West Burlington, Iowa, that they were going to clean up Washington together: “Bring your vacuum cleaners, bring your brushes, bring your brooms, bring your mops.” It was all so incongruous–can anyone imagine the 20th century New Class professional Hillary Clinton picking up a vacuum cleaner? Isn’t that what downtrodden pink collar workers abused by the patriarchy are for?

But even better, and more startling, people began to giggle. At Mrs. Clinton, a woman who has never inspired much mirth. Suddenly they were remembering the different accents she has spoken with when in different parts of the country, and the weird laugh she has used on talk shows. A few days ago new poll numbers came out–neck and neck with Barack Obama in Iowa,

Iowa, where that inconvenient student asked that planted question.

I have worked with very tough women. Some I despised, and some I admire – because of the same reason: the tough women of purpose gained my respect and admiration. I concur with Peggy Noonan:

A word on toughness. Mrs. Clinton is certainly tough, to the point of hard. But toughness should have a purpose. In Mrs. Thatcher’s case, its purpose was to push through a program she thought would make life better in her country. Mrs. Clinton’s toughness seems to have no purpose beyond the personal accrual of power. What will she do with the power? Still unclear. It happens to be unclear in the case of several candidates, but with Mrs. Clinton there is a unique chasm between the ferocity and the purpose of the ferocity. There is something deeply unattractive in this, and it would be equally so if she were a man.

Character is not something you can put on for show and remove at the end of the day by the door of your house like an old pair of shoes. Character can’t be faked.

And faking it is all Hillary and Bill are all about.

UPDATE
Oops, she did it again

Betsy posts about the “overcome” angle. Gina Cobb‘s looks at a thankful heart.

She is still tough. A Reagan aide told me that after she was incapacitated by a stroke she flew to Reagan’s funeral in Washington, went through the ceremony, flew with Mrs. Reagan to California for the burial, and never once on the plane removed her heels. That is tough.

When you are who you really are, those heels never come off.

vote for Hillary is a vote for the last entry of a Bush-Clinton-Bush-Clinton quarter-century.

We’ve had just two father-son presidencies in the 230 years of the republic, and the first (the Adams family) had the son taking over 24 years after the father, and just one year before the father’s death. The Bush succession is more anomalous with only eight years separating the two presidencies, a proximity that has launched a thousand Maureen Dowd ruminations on the hidden furies driving Oedipus Prez.

But the father-son connection is nothing compared to husband-wife. The relationship between a father and an adult son is psychological and abstract; the connection between husband and wife, concrete and quotidian. Therefore shall a man leave his father and his mother, and shall cleave unto his wife. George Bush, pere, didn’t move back into the White House in January 2001.

Which is why Hillary’s problem goes beyond discomfort with dynastic succession. It’s deep unease about a shared presidency. Forget about Bill, the bad boy. The problem is William Jefferson Clinton, former president of the United States, commander in chief of the Armed Forces, George Washington’s representative on earth.
…
The cloud hovering over a Hillary presidency is not Bill padding around the White House in robe and slippers flipping thongs. It’s President Clinton, in suit and tie, simply present in the White House when any decision is made. The degree of his involvement in that decision will inevitably become an issue. Do Americans really want a historically unique two-headed presidency constantly buffeted by the dynamics of a highly dysfunctional marriage?

I’ll be posting more on the dysfuction of dynasties later on.

Ann Coulter is carrying on (in the plasma screen)about stuff in her usual way, but at least managed to say something nice about Margaret Thatcher.

Yes, we are extremely dorky.

Rob and Michelle have more.