Other Iranian officials had blamed “foreign agents” and an online “proxy war” waged by the US, the UK and Saudi Arabia for the violence.

Khamenei’s remarks followed more deadly violence on Monday, in which nine people were killed, including seven protesters, a member of a pro-government militia and a policeman. Twelve others were killed over the weekend as the protests intensified.

For years Iran has targeted Latin America for recruitment,

Iranian intelligence and military efforts to recruit young men in Peru, train them in Iran, and return them to Peru. A Hezbollah movement has now been established in the country.
. . .
a former Iranian official with knowledge of the country’s terror network who claimed that “more than 40,000 of the regime’s security, intelligence and propaganda forces” have been successfully placed in the region. According to another source cited in the article, the Quds Force has established command and control centers in two Latin American countries.

Last November, Iran promised to send warships to the Gulf of Mexico

Iran will likely use the warships’ visit to South America to advance its relationship with Venezuela, a US adversary, the outlet reported.

Seven years ago I was posting on Iran-Venezuela ties.  Hezbollah and Iran have continued their expansion in our hemisphere (emphasis added)

Overall, Latin America, Central America, and the Caribbean offer Iran and Hezbollah fertile territory to build relations, bolster economic development and spread their ideology. Their efforts are made easier by governments such as Bolivia, Nicaragua, and Ecuador, whose hostility to U.S. interests manifest as non-cooperation on U.S. counterterror and defense partnerships. The Iranian regime also associates with the Bolivarian Alliance of the Countries of Our America (ALBA), a group created by Fidel Castro and Hugo Chavez, which resists the United States through political and economic means.

What is perhaps the most worrisome tactic of Iran and Hezbollah is the use of seemingly innocuous acts of diplomacy to obscure drug smuggling and money laundering. According to the U.S. government, Iran has relied on Latin America to evade sanctions by signing economic and security agreements in order to create a network of diplomatic and economic relationships.

According to Infobae, Lebanon-based Hezbollah generates at least $10million/year from drugs and weapons trafficking, but Hezbollah’s total take may be much larger at  the Brazil, Argentina and Paraguay Tri-Border Area (TBA).

Venezuela – going back to the Aeroterror flights days – continues to be on top of Iran’s list, granting Iranian military firms large tracts of isolated land to develop missile technology.

This means members of the two organizations, as well as drug lords from narco-terror groups such as FARC, not only coordinate and work together, but also are awarded state sponsorship from the highest levels of government

While this took place, the Obama administration allegedly covered up for Hezbollah in Latin America; They killed a probe of the terror group to get the Iran deal. According to Josh Meyer’s extensive report,

Whether Iran and Hezbollah use the region to circumvent sanctions, traffic drugs, launder money or plan future attacks, there is a real and growing threat.

Will the protests in Iran have any effect on this? Only if there’s regime change.

But Iranian expansion in the Americas continues to be one of the ignored stories of the decade.
.

I have a post coming up at noon on Pres. Trump’s UN speech, but wanted to point out separately a very important point: The purpose of the UN, as delineated in the speech.

He reminded the delegates that the United Nations was never meant to be a gigantic bureaucracy that would steadily become a world government. Rather, he said, it is an association of sovereign states whose strength depends “on the independent strength of its members.” Its success, he argued, depends on their success at governing well as “strong, sovereign, and independent nations.”

Trump cleverly turned patriotism — love of one’s own country, and what he called the necessary basis for sacrifice and “all that is best in the human spirit” — into the basis for international cooperation to solve problems that nations must face together

Latin Americans view the UN and other international, non-elected, supra-national organizations (such as the International Court of Justice) as saviors of sorts – regardless of corruption and other scandals. They would do well to live by this instead (and I repeat): The UN’s success depends on their [countries’] success at governing well as “strong, sovereign, and independent nations.”

But then, that would be truly revolutionary, wouldn’t it?

That list of countries, which does not necessarily reflect the counter-narcotics efforts of their governments or their level of cooperation with the US on illegal drug control, comprises Afghanistan, the Bahamas, Belize, Bolivia, Burma, Colombia, Costa Rica, Dominican Republic, Ecuador, El Salvador, Guatemala, Haiti, Honduras, India, Jamaica, Laos, Mexico, Nicaragua, Pakistan, Panama, Peru and Venezuela.

Bolivia and Venezuela were designated as countries that had “failed demonstrably” during the previous 12 months to adhere to their obligations under international counter-narcotics agreements.

Bad news on Colombia, which should not surprise readers of this blog,

But the novelty of this year’s memorandum was the decision to threaten Colombia, Washington’s closest ally both in the Latin American region and in the fight against drug trafficking, with decertification.

The US “seriously considered designating Colombia as a country that has failed demonstrably to adhere to its obligations under international counter-narcotics agreements,” the presidential memorandum stated, citing the “extraordinary growth of coca cultivation and cocaine production over the past 3 years, including record cultivation during the last 12 months.”

Record coca cultivation and cocaine production, that is, taking place as the FARC, the world’s largest narco-terrorist organization, becomes a political power.

In a somewhat related vein,
I’ve been watching the third season of Netflix’s morality tale, Narcos, where art imitates life. It takes place during the 1990s and, as the saying goes, “The more things change . . .” 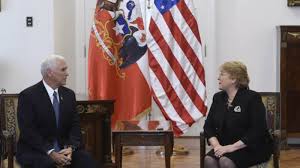 When it comes to Latin America, one can only wish other “journalists” were in the same league as Mary O’Grady. They might even find a Russia Russia Russia angle – and a little China for measure. No wonder The Diplomad is as bored with it all as I am.

Read my post, News from our hemisphere gone AWOL.

Cult of Climate Change: Bad news capitalist pigs! You will have to give up your land for the greater good!
Marin goes all-in on climate change, wasting money and suing Big Oil
Loesching The Left
Collins, Rubio Help Muslims Pass Senate Resolution 118 to Criminalize Free Speech
The beginner’s guide to Brazil corruption
Why Trump’s Pulling Out Of The Mideast Peace Process As DOA For Now
I Can’t Come Back! I Don’t Know How It Works!
[VIDEO] On Obamacare, Bob McEwen nails the fundamental problem
Xavier Seen Such a Dishonest California Politician?
Obama trapped Donald Jr. to justify spying on Trump
WoW! Forum: How Would You Solve The Problem Of North Korea?
What You Need To Know About The Soon To Be Most Powerful Man In America
David Brooks: Further thoughts on his discriminatory cultural arrogance
Real ‘refugees’? White South Africans facing genocide
Progressive sex ed revisited: The Left wants your children more than ever
Berkeley’s Hatem Bazian – the most dangerous professor in America?

This morning in the news: Dozens of Russia-related stories on every home page. All-Russia headlines.

Latin American and Caribbean stories in the home pages of

The hemisphere has otherwise vanished from American media.