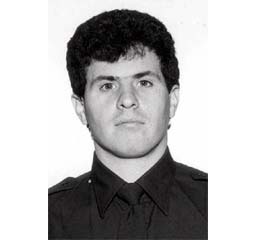 The younger Angelini, 38, was assigned to a house that protects New York’s theater district. Its motto: “Never miss a performance.”

“He was the air in my lungs, and now that air is taken away from me,” Donna Angelini said. “I keep waiting for him to come off a 24 [hour shift] and come through the door and say, ‘You wouldn’t believe what happened to me today.'”

A memorial service will be held today at 11 a.m. at Our Lady of Perpetual Help Roman Catholic Church in Lindenhurst.
— Elizabeth Moore (Newsday)

In the lobby of one of the stricken towers, a fire supervisor suddenly ordered him out of the building. They passed firefighters who had just encountered the body of department chaplain Father Mychal Judge. Michael helped carry Judge away. “… but then my officer grabbed me and said, ‘Let’s go!'” he said. “We ended up a block or two north on West Murray Street.”

“At the site, all week, guys were joking about him finding a pocket and eventually walking out. They said to me, ‘He was probably buried in a void, and as soon as he runs out of cigarettes he’s gonna come walking out.'”

Looking Back in Anger