Mary O’Grady has the details,
Kerry Urges Colombians to Cave to the FARC (emphasis added),

. . . the Obama administration is invested in the five years of negotiations—in Havana—between the government of Colombian President Juan Manuel Santos and the FARC. Mr. Santos has not secured one concession from the terrorists. The FARC says it will not accept even one day in jail, will not hand over its weapons to the government, will not relinquish its profits from kidnapping, drug-trafficking and extortion and will not compensate the millions of its victims. Mr. Santos, on the other hand, has broken multiple promises to the Colombian people, including a pledge not to grant the terrorists amnesty.

Argentina will seek a friendly settlement with Chile regarding the long-standing bilateral conflict over the extradition of Galvarino Apablaza before the Inter-American Commission on Human Rights (IACHR). Apablaza is accused of involvement in the murder of a conservative Senator and kidnapping of a newspaper executive.

Who is responsible for the current environmental and social conditions in Ecuador's Amazon?https://t.co/Va0FS4yXG7

JAMAICA
Bad idea: Woman arrested at JFK for smuggling half pound of cocaine in vagina from Jamaica (h/t Ed Driscoll)

LATIN AMERICA
Point: Central America’s Gangs are More Dangerous Than Ever
Counterpoint: International Terror and the Gangs of Douglas Farah

MEXICO
What Drives Crime in Mexico City’s Most Dangerous Areas?

PUERTO RICO
With CDC Help, Puerto Rico Aims To Get Ahead Of Zika

What is a verbal contract worth these days? Read my post, The $100 billion no-deal Iran deal.

The title comes from this line,

a highly successful, cutthroat consultant is never above using any means (or anyone) necessary.

Change consultant for community organizer. The dollar signs in the logo fit well with the money the Castros stand to get.

Today Menendez has an op-ed on the NYPost reiterating his proposal for a better Iran deal.

Please read my article, Menendez on Iran: Failure Theater, or not?
‎

Secretary of State John Kerry is in Havana today for the opening of the U.S. Embassy. Read my article and roundup here. Politico’s “formidable agent of change” on the job

As you may recall, Diosdado is being investigated by the U.S. Justice department for drug trafficking and money laundering.

Cabello and his nominal boss, President Nicolás Maduro, were quick to trumpet their versions. The meeting, Maduro said, was part of a “normalization” of relations between his increasingly beleaguered regime and the Obama administration. Cabello offered it as proof that the reports that he is a U.S. criminal suspect are false. U.S. officials, meanwhile, sounded confused. Both the White House and State Department spokesmen said they were unaware that Cabello had met with Shannon.I heard another story: that the meeting was part of what has become an increasingly urgent attempt by the administration to broker a soft landing for a collapsing Latin American state.

Diehl speculates that Kerry intends to prolong Leopoldo Lopez’s life, and aim for “fair elections” (whatever that means in Venezuela at this point, since there is no reason why the Venezuelan regime would want a real election). Mary O’Grady has more,

A State Department official told me last week that the issues discussed with Mr. Cabello in Haiti included the treatment of the Maduro government’s political prisoners, the importance of setting a date for parliamentary elections this year, and providing internationally credible observation.

While Shannon has traveled twice to Venezuela this year,

A State Department spokesperson told me in an email last week that the [Haiti] meeting was “positive and productive.” Translation: Nothing to see here; move along. In fact there’s a lot riding on these negotiations. The end of the chavismo dictatorship would be a good thing. But a descent into chaos of African proportions would take with it the frail democracy movement.

The fact of the matter is that Venezuela is a problem big enough that negotiations are a must because the alternative, not negotiating and waiting to see what happens is even worse.

There is a lot riding on these negotiations, for both Venezuela and Cuba.

And then there is a fourth party not mentioned by Diehl and O’Grady: Iran.

Emili Blasco, in his book Bumerán Chávez: Los fraudes que llevaron al colapso de Venezuela, details the many and extensive ties between Iran and Venezuela. Not to be ignored is how Iran milks the difference between the black market and official bolivar-dollar exchange rates and drains Venezuela’s foreign currency reserves. An easing of commercial ties between the U.S. and Venezuela will benefit Venezuela’s foreign currency reserves.

Iran, for one, will be watching closely.

On Friday, President Barack Obama named Bernard “Bernie” Aronson, a U.S. assistant secretary of state for inter-American Affairs from 1989 to 1993, as the envoy. He will help the Colombian government and the Revolutionary Armed Forces of Colombia, known as FARC, overcome roadblocks in the final stretch of negotiations.

Let’s hope it’s not another case of “not wanting anything in return.”

But they do look glum, don’t they? 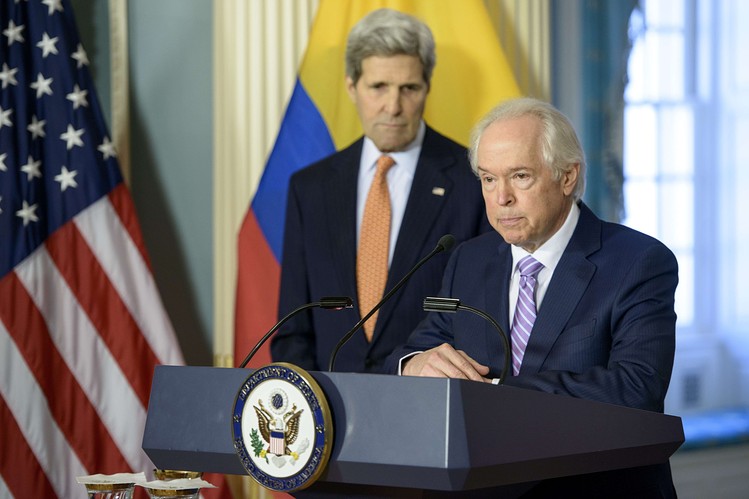