After a spin in the city with Keiffer,

You can always leave the city behind and go fishing in Rondonia:

Tips of the hat to Blogs4Bauer and Siggy.

Speaking of Siggy, did you listen to this week’s podcast yet?

The Anchoress found out that next season they’re having a woman president,

just in time to get the world used to the idea. Ummm…not exactly news – as with the cleavage and the pink suits, we’ve been here before.

Last season was pretty lame. Next season promises to be lamer.

I got addicted to 24 on the first episode of day 4, when the evil terrorist mom was doing dastardly deeds like killing her son’s girlfriend.

That year had a great plus in the casting: the mom and son were played by Shohreh Aghdashloo and Jonathan Ahdout who also played mother and son in House of Sand and Fog, making it rather amusing to see how they got along without gloomy Ben Kigsley who also played Ghandi. Ghandi would have never lasted a minute in that household. Never mind that the really bad guy, Marwan, had been The Mummy and was a great bad guy.

After I watched the entire season 4 I rented the DVDs and spend a couple of weekends catching up with days 1, 2, and 3. My favorite character (other than Jack) is George Mason, brilliantly played by Xander Blakely.

President David Palmer Dennis Haysbert, is another favorite – you did feel you were in good hands with him. Unlike his brother, President Palmer #2 who whispered his way through a nuclear attack in LA. Obviously the writers were sorry they got rid of PP#1.

Best of all, I loved the pacing in day 4. I was addicted to the pacing.

Well, I sat through the whole day 6 and I’m missing the good old days.

One thing for sure, things were never the same after they killed off Edgar. Edgar wasn’t good-looking but he was reliable and solid. On day 6 they killed Milo, who was not only reliable, he was PDG-looking.

Having started day six with a nuclear explosion that apparently didn’t affect street trafficin LA, the whole season’s pacing went AWOL and, with still 20+ minutes to go in the final episode the net result was, as Blogs4Bauer said,

’24’ stops at this point. The next twenty minutes are actually an episode of ‘General Hospital’ that somehow got spliced in by mistake.

You know things were off when Jack came out of the ocean and I was wondering if his cell phone still worked. Back on day 4 you knew the phone would work because it was Jack Bauer’s phone, dammit!

Will I watch day 7 next January? Probably.

But let’s hope they cut out so much soap. The minute I see Chloe bringing her baby to work, it’s curtains, guys.

Update, Thursday, May 24: The Carnival of Bauer is on!

Tonight, 9PM: Will Jack stop at the drive-through and get something to eat? 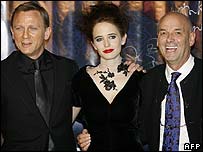 Jack Bauer banned in Venezuela, citizens take to the streets

RCTV also has the local syndication rights to “24.”

Now he has gone too far.

Chavez’ government justifies the decree not to renew RCTV’s licence on the grounds of public morality. The station will be used now for “public service”–perhaps re-runs of the ever-popular “Alo Presidente?” But make no mistake about it. Chavez has no delicate moral scruples. He is shutting down RCTV because it annoys him, and because he can. And if the people of Venezuela are deprived of their weekly Jack Bauer fix? They’ll be better off not watching such a character, beside which the caricature that is Hugo Chavez cuts a very poor figure.

And that’s only the beginning, folks.

Aside from the nonstop action, the convoluted plots and the manly men, there are other reasons why I am addicted love 24.

The first one is the timeframe paradox: While life-and-death national security situations supposedly are resolved within a 24-hr time frame, 24 is the first TV program where everything is not solved in one hour. Tetchy Dr. House cures the most obscure diseases even when he’s delirious from a gunshot wound, the many incarnations of Law & Order solve the crime and get a veredict, and the many locations of CSI collect all the evidence and sometimes the bad guys confess (try that in real life!) while looking mahrvelous – all in less than an hour.

Another thing I like about 24 is the emphasis on the power of the individual. In 24, the larger the group, the greater the bumble. It’s not just that the more terrorists involved in a plot, the worse it’ll work out for them. The government, the largest organization of all, fails time and time again to prevent any of the attacks in spite of having fantastic technology and instant telecommunication links.

In 24, it is the commitment of one individual that makes a difference.

There is another aspect to 24’s appeal: Yesterday’s WSJ had an article on Jack Bauer’s Dilemmas–and Ours: Watching “24” as a primer on moral philosophy

All these episodes help the show to maintain a realistic moral tone. An enemy that rejects everything we hold dear about our civil society will inevitably force us to make compromises between competing principles and loyalties. The most interesting complications that ensue as a season of “24” unfolds are the moral ones. And the show’s great virtue is that it never pretends that these dilemmas are simple or false.

And these dilemmas continue to be relevant.

Now, I don’t know a thing about sports. And I certainly don’t know anything at all about football or soccer. So I’m completely amazed that a guy who wasn’t scoring in his last team has just signed a contract for a quarter of a billion bucks. What’s even more amazing is that the guy is referred to as a sex symbol. I kid you not. The TV anchors say, “the superstar and sex symbol” – I just heard one right now.

A sex symbol? He spends more on manicures than I – and I go for a manicure every week!

So it seems to me that the lesson in this is, have a really really good agent.

This weekend, however, my mind is focused on one thing and one thing only – you guessed it. I was visiting Obi’s Sister who’s anticipating Jack Bauer’s return, and, as she puts it,

Even the obscene amount of money offered to pseudo-royal Beckham cannot tarnish my anticipation. After all, if Jack really wanted Beck’s money, all he’d have to do is show up and take it. Like candy from a baby. And he wouldn’t even need a hacksaw.

Did she say, Sir Becks? He was knighted?

Get me that agent – I want to be a Dame!

————————————
NY Times delivery update:
For the first time since I started assertively asking (i.e., stopped paying) the NYT to discontinue weekend delivery, the paper was not on the driveway this morning. Did they finally stop? The real test comes tomorrow. One time they didn’t deliver early on Saturday but they delivered it later. If it’s not on the driveay by then, it must mean they stopped.
————————————
Via Pamela, not a sex symbol but a very sexy performer: Charles Aznavour. Some day I’ll post about the time I saw him on stage, but for now, hear him sing She

What a fabulous guy.