From Associated Press, that arm of the vast right wing conspiracy:
US removes uranium from Iraq.

Let’s pay attention to that: The United States military have removed

which was stored at the nuclear facility in Tuwaitha, Iraq, some 12 miles south of Baghdad.

Other important points:
1. The yellowcake removed is the last mayor remnant of Saddam’s nuclear program. There was more.
2. The military had removed earlier this year four devices for controlled radiation exposure which “contain elements of high radioactivity that could potentially be used in a weapon”.
3. The yellowcake was sold to Cameco, which may have been involved in the Oil-For-Food scam, and is a company in which Soros Fund Management LLC owns a substantial portion.

It Must Suck Being Joe Wilson Today – Joe, you’ve been punk’d!

In other news, Iraqis lead final purge of Al-Qaeda, Islamism is discredited, and We’re winning this War on Terror.

The Carnival of Latin America and the Caribbean will be up in a couple of hours. Bear with me – with the rescue of the Colombian hostages, it’s going to be huge!

Special thanks to Hip Hop Republican and Larwyn.

A brief round-up of Iranian news shows the games are on:

An Iranian hard-line student group unveiled a new video game Monday that simulates an attempt to rescue two Iranian nuclear experts kidnapped by the U.S. military and held in Iraq and Israel.
…
“We tried to promote the idea of defense, sacrifice and martyrdom in this game,” Fakhrian said.

Does that means that you win if you blow yourself up at the end? And what about the 72? 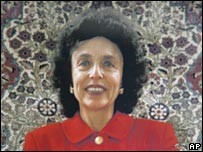 The fashion game:
Iran police step up crackdown on unIslamic dress, yet again. Mannekins are not safe, either.

Lest you think that all these games amount to a lot of fun, a lot of people don’t agree with you.