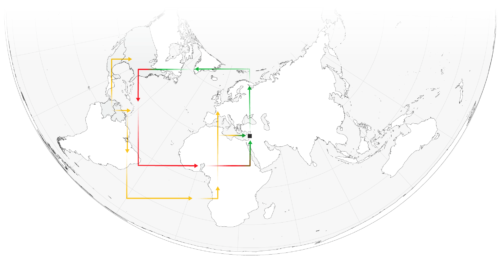 On the same week that Chavez was supposedly telling the FARC to lay down their arms, Venezuelan journalist Patricia Poleo reported that Venezuelans of Arab ancestry are being recruited under the auspices of Tarek el Ayssami, Venezuela’s vice-Minister of the Interior, for combat training in Hezbollah camps in South Lebanon. Here is my translation.

That was then, this is now:

Visitors to Fausta’s blog have been reading about it for years, so it’s good to see more on it: Breitbart News interviewed military and intelligence officials, policy experts, members of Congress, and a former White House official for this report, all of whom warned about the threat posed by Iran’s continuing encroachment into Latin America.Iran is infiltrating Latin America thanks largely to Hezbollah, a Shiite terrorist group that has sworn loyalty to Iranian Ayatollah Ali Khamenei, showing overt preference to the Tehran dictator over its host-state Lebanon. Hezbollah, along with Iran’s Revolutionary Guard Corps (IRGC), have provided the on-the-ground support needed for the proliferation of Iran’s Khomeinist ideology.

[my translation] The appointment in Damascus likely came about from January, 2007, conversations between Chavez and Iranian president Mahmoud Ahmadinejad, which bounced up cooperation between Venezuela and Islamic state interests. On March that year, direct flights started between Caracas and Teheran, with a stop at a military base in Damascus, which placed the Caribbean at Hezbollah’s closer reach.

An annual security assessment presented to the U.S. Senate by James Clapper, the director of National Intelligence, has excluded Iran and the Lebanese militant group Hezbollah from its list of terror threats to U.S. interests, despite both being consistently included as threats in previous years.
. . .
In a previous report from January 2014, Clapper included Iran and Hezbollah in the ‘Terrorism’ section, writing that both “continue to directly threaten the interests of U.S. allies. Hizballah [sic] has increased its global terrorist activity in recent years to a level that we have not seen since the 1990s”. Iran was also given its own sub-heading in the ‘Terrorism’ section of such assessments in 2011, 2012 and 2013.

Any evidence that Iran and Hezbollah have changed their ways?

“I think that we are looking at a quid pro quo, where Iran helps us with counter-terrorism and we facilitate their nuclear ambitions and cut down on our labelling of them as terrorists,” says [professor of political science at Northeastern University and member at the Council of Foreign Relations Max] Abrahms.

In the wake of Alberto Nisman‘s death, it wouldn’t be unreasonable to expect some smiling faces in Argentina. As you may recall, a congressional committee had invited him to testify [in 2013] about Iran’s spy network in Latin America and its alleged role in a plot to bomb John F. Kennedy Airport in New York.

Last December, the government fired a powerful spy chief who was Nisman’s lead investigator. The prosecutor retaliated with a bombshell: He accused the president, her foreign minister and other political figures of conspiring to absolve the accused Iranians in exchange for commercial deals. Iranian diplomat Mohsen Rabbani, a top suspect in the 1994 attack, participated in secret talks, according to Nisman’s criminal complaint.

Argentine spies “negotiated with Mohsen Rabbani,” an indignant Nisman said in a television interview on Jan. 14. “Not just with the state that protects the terrorists, but also with the terrorists.”

The Argentine government denied his allegations.

Some others at the Tri-border area will be happy.

Let’s not forget Venezuela, which for years has been helping Iran dodge UN sanctions and use Venezuelan aircraft to ship missile parts to Syria. The monthly flight allegedly

flew from Caracas carrying cocaine to be distributed to Hezbollah in Damascus and sold. The plane then went to Tehran carrying Venezuelan passports and other documents that helped Iranian terrorists travel around the world undetected.

Of course, the regime in Cuba, where Hezbollah has established a center of operations in Cuba in order to expand its terrorist activity and facilitate an attack on an Israeli target in South America, is already happy.

Transnational Organized Crime.
The spread of criminal organizations continues to tear at the social, economic, and security fabric of our
Central American neighbors. Powerful and wellresourced,
these groups traffic in drugs—including cocaine, heroin, marijuana, counterfeit pharmaceuticals, and methamphetamine—small arms and explosives, precursor chemicals, illegally mined gold, counterfeit goods, people, and other
contraband. They engage in money laundering, bribery, intimidation, and assassinations. They threaten the very underpinnings of democracy itself: citizen safety, rule of law, and economic prosperity. And they pose a direct threat to the stability of our partners and an insidious risk to the security of our nation.

While there is growing recognition of the danger posed by transnational organized crime, it is often eclipsed by other concerns. Frankly, Mr. Chairman, I believe we are overlooking a significant security threat. Despite the heroic efforts of our law enforcement colleagues, criminal organizations are constantly adapting their methods for trafficking across our borders. While there is not yet any indication that the criminal networks involved in human and drug trafficking are interested in supporting the efforts of terrorist groups, these networks could unwittingly, or even wittingly, facilitate the movement of terrorist operatives or weapons of mass destruction toward our borders, potentially undetected and almost completely unrestricted. In addition to thousands of Central Americans fleeing poverty and violence, foreign nationals from countries like Somalia, Bangladesh, Lebanon, and Pakistan are using the region’s human smuggling networks to enter the United States.

While many are merely seeking
economic opportunity or fleeing war, a small subset could potentially be seeking to do us harm. Last year, ISIS adherents posted discussions on social media calling for the infiltration of the U.S. southern
border. Thankfully, we have not yet seen evidence of this occurring, but I am deeply concerned that smuggling networks are a vulnerability that terrorists could seek to exploit.

I am also troubled by the financial and operational overlap between criminal and criminal networks in the region.

Gen. Kelly also expressed concern about the presence of Lebanese terror group Hezbollah and the Iranian influence in Latin America. Hezbollah is backed by Iran.

Breitbart News reported that nearly 500 immigrants from terrorism-linked countries such as Syria and Iraq were apprehended trying to enter the U.S. illegally in 2014 alone.

Last week I posted on Argentina as the #3 drug shipping link.

Apparently the ground coke was going to be shipped from a Chilean – not Argentinian – port.

The only use for ground coca leaves is cocaine production.

A Bolivian government minister stated that this is the first time authorities seize ground coca leaves meant to be processed into cocaine outside the country. He estimated that the $350,000 ground coke would have a street value of over $90million.

Considering the political landscape in the Middle East, would it be unreasonable to assume Hezbollah is involved?

The Center for a Secure and Free Society has released a report,CANADA ON GUARD: Assessing the Immigration Security Threat of
Iran, Venezuela and Cuba which

highlights attempts to violate Canada’s immigration system, examines Venezuela’s role as a “bridge” for Iranian covert access to Canada, reviews the use of cultural exchange and other soft power strategies to win support for state sponsors of terrorism, and presents preliminary policy recommendations for strengthening Canada’s immigration and national security system

The report’s key points are:

Especially interesting: the sections on how Cuba’s role in the Misión Identidad (biometric ID cards) immigration system facilitates the entry of Cuban agents into Venezuela, and Tare[c]k El Aissami’s role as Iran, Syria and Hezbollah’s man in Mérida.

Read more about Iranian infiltration in Canada and the Americas here.