Also, you may enjoy this interview,

Greenpeace willfully engaged in inflicting irreparable damage. In their blindness to say “the future is renewable”, they can’t see that the past is not.

Meir Soloveitch writes in the WSJ about the origins of the Shearith Israel synagogue: God Delivered the Pilgrims—and My People
Thanksgiving always had particular resonance for one group of religious freedom-seekers.

As with the Pilgrims at Plymouth Rock, the origins of Shearith Israel trace back to a small group of religious freedom-seekers and a treacherous ocean passage to the New World. In September 1654, 23 Jews set sail from Recife, Brazil, where the Portuguese Inquisition had made practicing Judaism impossible. Intending to return to Europe but captured by pirates mid-voyage, they gave themselves up for lost—until, as a congregational history puts it, “God caused a savior to arise unto them, the captain of a French ship arrayed for battle, and he rescued them out of the hands of the outlaws . . . and conducted them until they reached the end of the inhabited earth called New Holland.”

Once arrived safely in New Holland, better known as New Amsterdam, the refugees formed the first Jewish community in North America. From the start, they remained loyal to their faith: praying together, ensuring the availability of kosher meat, and observing their holidays. For these individuals, the symbolism of lighting the Hanukkah candles in the dark of winter must have been especially resonant, at one with the dawning presence of Judaism in the New World.

At the beginning of the 18th century, Shearith Israel—the name means “the remnant of Israel”—was importing its clergy from Europe. But by 1768, it was ready to hire its first American-born minister, Gershom Mendes Seixas. And it is here that the story of Shearith Israel becomes forever intertwined with the story of Thanksgiving—and of America.

Read about how it did here In honor of those who served, St. Louis Boy Scouts place nearly 200,000 flags at Jefferson Barracks 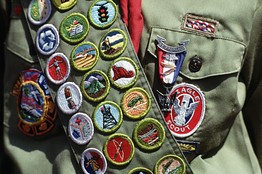 Michael Malone, Eagle Scout and author of Four Percent: The Story of Uncommon Youth in a Century of American Life, writes about A Century of Eagle Scouts
The Eagles’ service project is the single greatest youth-service initiative in history, and one that has touched every community in America in an important way.

Out of the more than 115 million boys who have passed through the Boy Scouts of America in the last 102 years, approximately two million have become Eagle Scouts, a 2% rate that has climbed to about 4% of all scouts in recent years. Some may have excelled in outdoor challenges and troop leadership, or while earning merit badges for oceanography and entrepreneurship. Yet all have been changed by the experience of what has been come to be called “the Ph.D. of Boyhood.” And these Eagles in turn have changed the face of American culture in ways both obvious and unexpected.

Many went on to notable careers and distinguished service to the country. The list of famous Eagles over the last century includes movie and television stars, six Medal of Honor recipients, Nobel Prize winners, novelists, a number of astronauts (including most Shuttle astronauts), Tuskegee airmen and Japanese-American internees, congressmen, senators and governors, an endless number of corporate CEOs and university presidents, a U.S. president (Gerald Ford), and the first man to walk on the moon (Neil Armstrong). But there are other, perhaps less obvious, Eagles as well: sexologist Alfred Kinsley, Scientology founder L. Ron Hubbard and Washington’s disgraced ex-mayor Marion Barry.

Two summers ago, during the BSA centennial parade in Washington, D.C., the adult Eagle contingent of official marchers featured a diplomat, a journalist, military officers, a bomb-demolition expert, doctors and a department-store Santa Claus. Despite what you might think, America’s Eagles are spread across the political spectrum. They include individuals across all races (scouting was officially integrated from the start) who hold beliefs as diverse as other Americans. What they have in common is that they chose a life of achievement and assumed leadership roles at a very young age.

My son is an Eagle Scout, and has taught me the value of perseverance and being goal-oriented at a young age. It takes a (young) man of character to become an Eagle.

To all Eagle Scouts, who have 100 million hours of service to their communities, my heartfelt thanks.

With gratitude to all of those who have sacrificed for our freedoms, 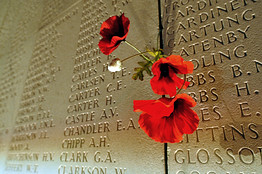 In Flanders Fields the poppies blow
Between the crosses row on row,
That mark our place; and in the sky
The larks, still bravely singing, fly
Scarce heard amid the guns below.

We are the Dead. Short days ago
We lived, felt dawn, saw sunset glow,
Loved and were loved, and now we lie
In Flanders fields.

Take up our quarrel with the foe:
To you from failing hands we throw
The torch; be yours to hold it high.
If ye break faith with us who die
We shall not sleep, though poppies grow
In Flanders fields.What Monday Means
A Memorial Day tradition renewed.

Written by Canadian army officer and physician John McCrae after he had witnessed the horrific carnage at Ypres, the poem begins with the words, “In Flanders fields the poppies blow between the crosses, row on row.”

It concludes with a message from the honored dead: “To you from failing hands we throw the torch; be yours to hold it high. If ye break faith with us who die we shall not sleep, though poppies grow in Flanders fields.”

Nearly a bloody century later, Americans have infinitely more reasons to remember and to be thankful for all who have since died in the defense of liberty.

Steven Hayward points to this book, The Politically Incorrect Guide to the Presidents: From Wilson to Obama, which points out that,

Americans in 1787 knew they could count on the “moderation and virtue” of this one man enough to entrust him with this brand new and undefined office. Washington knew his decisions and actions would be crucial to whether the office—and the Constitution—would succeed for the ages. “Few who are not philosophical spectators,” he wrote, “can realize the difficult and delicate part which a man in my situation has to act. . . In our progress toward political happiness my station is new; and, if I may use the expression, I walk on untrodden ground. There is scarcely any part of my conduct which may not hereafter be drawn into precedent.

David Azerrad writes about Washington, the Indispensable Man of the Revolution

As a President who took his bearings from the Constitution, Washington devoted considerable attention to foreign policy. Our first President sought to establish an energetic and independent foreign policy. He believed America needed a strong military so that it could “choose peace or war, as our interest guided by justice shall Counsel.” His Farewell Address remains the preeminent statement of purpose for American foreign policy.

No survey of Washington’s legacy would be complete without acknowledging his profound commitment to religious liberty. Many today seem to have lost sight of the crucial distinction he drew between mere toleration and true religious liberty. As he explained in the memorable letter to the Hebrew Congregation in Newport:

All possess alike liberty of conscience and immunities of citizenship. It is now no more that toleration is spoken of, as if it was by the indulgence of one class of people, that another enjoyed the exercise of their inherent natural rights.

On this day, as we celebrate our greatest President (his actual birthday is on Wednesday), let us remember why he–and not Polk or, heaven forbid, Wilson–deserves a national holiday.