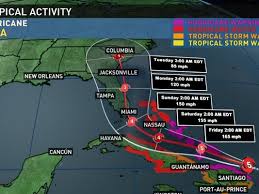 I spent a scary Hurricane Sandy in my house in NJ reading the Psalms out loud so I wouldn’t have to listen to the wind.

When it comes to hurricanes, I’d rather be thinking about curtains.

Judge Hirsch found it unconstitutional, and calls the U.S. “a sanctuary coountry.”

The judge’s ruling was a rebuke of Miami-Dade Mayor Carlos Gimenez’s much criticized decision to allow county jails to hold immigrants awaiting deportation by federal agents, a measure that has sparked protests and anger by many immigration advocates in South Florida

The Feds have 48 hours to pick up inmates held in the Miami-County jail.

The 26-year-old faces two charges each for the five people killed during the incident near the baggage claim of Terminal 2. Santiago also faces two counts each for the six people wounded in the shooting.

Santiago is due back in court Monday, where he will enter a plea on all charges. He confessed to planning the shooting following interrogation from officials with the Broward Sheriff’s Office, FBI and other agencies, authorities said.

As you may recall, Santiago allegedly Converted to Islam, Identified as Aashiq Hammad Years Before Joining Army, according to Judicial Watch’s investigation.

Not only was the murderer of the Pulse patrons an employee of a global security firm the DHS uses as subcontractor to provide security to federal buildings, had been questioned twice by the FBI, was licensed as a security guard, and his wife knew of his plans; It so happens that, when  a gun shop which refused to sell him body armor and bulk ammo told the FBI about him, the FBI didn’t follow up.

Read my article, Say something? FBI does nothing

FBI Special Agent in Charge Ronald Hopper said today that the FBI had taken an interest in Mateen twice: first in 2013 after he made “inflammatory” comments to co-workers and then again the next year after he was linked to another U.S. radical who became a suicide bomber in Syria.

2. Terrorist’s father: “I don’t think he was radicalized”

Siddique Mateen also hosts a show on a US cable outlet, Afghan TV, aimed at Western audiences. On both platforms, Mateen has campaigned for the Taliban, and at times has promoted himself as the leader of a government in exile.

Historically it is state failure which drives civilian armament and not the other way around. Perhaps the clearest example of this trend is Lebanon where the inability of the central government to protect the sectarian communities has led each to protect itself. While America is not Lebanon, the same principles hold true: competence inspires confidence and there is precious little competence in the administration.

AND
Reminder: More Than 500 AR-15’s Were Smuggled in Eric Holder’s Fast and Furious Scheme

Yesterday:
Following a rally in Jupiter, Donald Trump’s campaign manager, Corey Lewandowski, pulled Breitbart reporter Michelle Fields towards the ground when she asked The Donald his position on affirmative action,

I wasn’t called upon to ask a question during the televised press conference, but afterwards Trump wandered around, stopping at every reporter to take their questions. When he approached me, I asked him about his view on an aspect of affirmative action.

Trump acknowledged the question, but before he could answer I was jolted backwards. Someone had grabbed me tightly by the arm and yanked me down. I almost fell to the ground, but was able to maintain my balance. Nonetheless, I was shaken.

The Washington Post’s Ben Terris immediately remarked that it was Trump’s campaign manager, Corey Lewandowski, who aggressively tried to pull me to the ground. I quickly turned around and saw Lewandowski and Trump exiting the building together. No apology. No explanation for why he did this.

Lewandowski should be fired, right now.

Marco Rubio held a rally in Hialeah to a mostly empty stadium,

Ted Cruz’s rally downtown was announced the day before and it was full to capacity. Carly Fiorina announced her endorsement

Bernie and Hillary took turns pandering to the Univision audience at Miami-Dade college, in a debate that featured pro-illegal immigration/open borders advocate Jorge Ramos, whose daughter works for the Hillary campaign. I have written in the past how Univision is not the way for the GOP to outreach Latinos. Holding a debate where the moderators won’t speak English does not sit well by me, either.

The Republican debate is scheduled to start at 8pm Eastern.

In spite of the federal government denials that Islamic militants may have tried to cross the Mexican border to conduct operations in the U.S., a Judicial Watch investigation reveals that al-Qaeda terrorist Adnan G. El Shukrijumah (also spelled Shukijumah in Spanish-language reports), whose mom still lives in Miramar, FL, hid in a Mexican border city across Douglas, Arizona in 2004.

El Shukrijumah was connected to Mohammed Atta, and both were with another man at the Miami immigration office on May 2, 2001,

Adnan G. el Shukrijumah, an al-Qaida terrorist leader once based in South Florida, hid in northern Mexico with two other Arab militants in a border city across from Douglas, Arizona, in 2004, newly released State Department cables say.

One of the cables noted that the information about Shukrijumah, killed in Pakistan in 2014, came from a trusted confidential source who had a relative involved in migrant smuggling.

In the case of the Shukrijumah cables, they suggest that the federal government was wrong to deny that Islamic militants may have tried to cross the porous Mexican border to conduct operations in the United States.

The Shukrijumah case has attracted wide attention since the 9/11 Commission in 2004 published a report quoting an immigration officer as saying that she was “75 percent sure” she saw the Miramar resident with hijack leader Mohamed Atta and another man at the immigration office in Miami on May 2, 2001 — four months before the plane attacks. Atta piloted the first plane to crash into the World Trade Center twin towers in New York on Sept. 11, 2001. The second man with Atta, the commission report said, was possibly Ziad Jarrah, the pilot who crashed his plane into a field in Pennsylvania after passengers rebelled and tried to storm the cockpit to recover control of the aircraft.

The possible presence of Shukrijumah with the 9/11 pilots stirred speculation that the terror leaders received assistance from U.S.-based militants while they plotted the attacks.

Related:
The Miami Herald article reports that Shrukrijumah’s mother has said her son left for Trinidad in January 2001. Here is a report on Jihad in Trinidad.