Because of the latest version of the Iranian hostage crisis, Pres. Lula’s visit to the USA went mostly ignored. However, this was a very significant event.

I have stated several times on this blog that am certain that, once Brazil gets its economic act together, it will bring about a new era of prosperity to Latin America. Brazil is a leader in Latin America: when Brazil did away with its military dictatorship, the countries in Latin America followed.

Brazil has every potential to become an economic superstar: The country has the land mass and the population, it participates in the international banking system, it has manufacturing, natural resources, and entrepeneurship. And it’s making the right kind of economic reforms.

The good news on the Brazilian economy have gone mostly ignored, but they are very important: Brazil’s economy: Bigger than thought
An underestimated pay-off from economic reform

There are other reasons to think that Brazil is better off than generally realised. In a recent paper*, two IMF economists argue that official data “grossly underestimate” the growth of household income. Brazil’s economic opening in the early 1990s lowered prices and improved the quality and availability of goods, changes that were largely missed by the consumer-price index. Using data about what people actually consumed, the economists estimate that income per head grew 4 1/2%a year between 1987 and 2002 compared with the official figure of 1 1/2%, with the poor benefiting most. That makes Brazil look better; it makes economic reform look better, too.

As I mentioned in my conversation with The Gathering Storm that it is strategically important to have democratic, prosperous countries sorrounding declining countries like Venezuela.

The implications of this will be amazing. Huge Brazil and huge America are united in a common purpose to halt the rising and arrogant power of Hugo Chavez, whose oil fueled earnings are being used to intimidate other nations. Now Hugo is encircled by two big clouds, Brazil to his south and the U.S. to his north, both of whom are determined to develop their ethanol industries to reduce Chavez’s monopoly on energy. Ethanol is not a cure-all and won’t replace oil as an energy source, but it will widen the pool of available energies, and that’s important because right now, China’s and India’s rises have narrowed the margin of excess, making every drop that Chavez produces a critical one because there isn’t any extra. Hence. Chavez’s monopoly and power.

We have a threshold of opportunity to create free markets, and create wealth, by abolishing all farm subsidies and trade barriers with Latin American countries that are willing to provide property rights, democracy and the rule of law for their citizens.

The current trend in Washington is likely to approve serious barriers to expanding trade. This is a grievous mistake that will resonate not only in trade, but in national security, terrorism, immigration policy, and corruption in the USA.

Today at noon my Blog Talk Radio guest is Monica Showalter of Investor’s Business Daily. We’ll be talking about the UK and the Falklands, Brazil, Venezuela and Latin America.

Other blogs posting on it
Silvio Canto 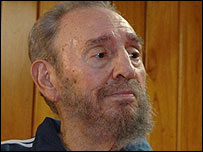