Creative Minority Report has a hilarious video of how CNN counts a show of hands.

Now, does she forget that we can see her? Or does she think we can’t count?

point where anyone would read — is the following (emphasis added):

The results may be favoring Obama simply because more Democrats than Republicans tuned in to the debate. Of the debate-watchers questioned in this poll, 41 percent of the respondents identified themselves as Democrats, 27 percent as Republicans and 30 percent as independents.

I’m far from being a polling expert, but this is obviously a slanted poll. A 14-point split between Republican and Democrat respondents? And what percentage of those “independents” were leaners for Obama?

That’s bad enough, but the really egregious part is CNN’s blatant reportage of opinion as fact, which allowed the creation of a news story announcing Obama’s victory.

“It can be reasonably concluded, especially after accounting for the slight Democratic bias in the survey, that we witnessed a tie in Mississippi tonight,” CNN Senior Political Researcher Alan Silverleib said. “But given the direction of the campaign over the last couple of weeks, a tie translates to a win for Obama.”

Those of us fortunate enough to have paid attention during a couple of weeks of grade school math would not refer to a 41:27 ratio as “slight”. They had two Democrats for every Republican, for pity’s sake.

However, it’s CNN we’re talking about here. That kind of survey sample in favor of the Dems is their idea of “slight”.

I first heard about this while listening to Lizzy Blakney‘s podcast: 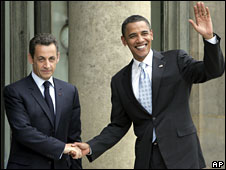 During today’s press conference in Paris, Christiane Amanpour asked Sarkozy “if he feelt awkward praising black Obama when, only a few years ago, he was calling black French rioters “scum.”

This woman equates French rioting delinquents with an American presidential candidate… because of race. And we’re supposed to respect her as a journalist?

Sarkozy seized the opportunity to pour scorn and sarcasm, praising her “exceptional knowledge of French political life.” And then he let it rip.

Richelieu at the Weekly Standard thinks so:

What a depressing debate. CNN’s long slide into mediocrity accelerates. Is this what running for president of the greatest democracy in the world has become? Standing in front of CNN’s corporate logo in a hall full of yowling Ron Paul loons and enduring clumsy webcam questions from Unabomber look-a-likes in murky basements?

but I disagree; the basements weren’t all murky. Some of those basements actually looked quite bright.

Several bloggers are upset that there were Hillary campaign employees planted in the audience. I would like to see a debate of an entire audience of Hillary employees asking questions to the Republican candidates.

After all, campaign politics is all about bringing your message across under pressure, and that would make for an interesting evening (moronic questions and all -“What Would Jesus Do about the death penalty?” included).

James Joyner, however, doesn’t let CNN off the hook:

If one didn’t know better, one might suspect that CNN intentionally assembled a bunch of yahoos in the crowd to represent the Republican base and then fed the candidates gotcha questions from Democrats in order to make them look bad. That would be entertaining, I suppose, but horridly bad journalism. It’s perhaps more hopeful to think that they simply didn’t bother to vet the questioners. Of course, that’s not exactly good journalism, either.

Since CNN is known for its fine journalism, however, there’s almost certainly a third alternative explanation. It alludes me at the moment.

Leave it to ScrappleFace (who’s actually nice looking) to come up with the best question, though:

More about the debate here

Muhammad and Malvo, now in prison in Virginia, still managed to kill 10 and wound three — including an elementary school kid shot in the back — while paralyzing the nation’s capital for three full weeks.

The jailhouse drawings of the younger sniper, Malvo, tell it all:

– One sketch of Osama bin Laden exalts him as a “Servant of Allah.”

– A self-portrait of him and Muhammad is captioned: “We will kill them all. Jihad . . . Allah Akbar!”

– A sketch of the burning Twin Towers has as its caption: “America did this. You were warned.”

– A poem scribbled alongside an American flag and star of David drawn in cross hairs reads: “Our minarets are our bayonets, Our mosques are our baracks, Our believers are our soldiers.”

– The Quran (Surah 2:190) is quoted as follows: “Fight in the cause of Allah those who fight you and slay them wherever ye catch them.” Also: “Islam the only true guidance.”

– The White House is drawn in cross hairs, surrounded by missiles, with the warning: “Sep. 11 we will ensure will look like a picnic to you,” and “you will bleed to death little by little.”

– Another warning reads: “Islam. We will Resist. We will conquer. We will win.”

Somehow CNN’s “special investigations unit” managed to overlook this pile of courtroom evidence. It showed only one drawing — a self portrait of Malvo shedding tears.

CNN maintains that Malvo, an alleged victim of negligent parents, now has remorse for his victims — even though he wrote in one notebook: “They all died and they all deserved it. We will not stop. This war will not end until you are all destroyed utterly.”

CNN also omitted the fact that while Muhammad and Malvo were in county jail awaiting trial, their lawyers insisted they be fed Islamic “halal” meals, such as veggie burgers, instead of ham sandwiches. They also got copies of the Quran.

According to Knight Ridder and others reporting at the time, the director of a shelter where the two men stayed for a spell in Washington state tipped off the FBI that Muhammad “might be a terrorist.”

That incident mysteriously disappeared from an interview that CNN host Soledad O’Brien conducted with the same source for the special.

As with the CNN excercise in moral equivalence in its God’s Warriors series, CNN continues to show which side they’re on.

The first item has to do with CNN’s shameful exercise in moral equivalence and disregard for historical facts, God’s Warriors. I watched part of the Christian Warriors episode and fully expected Amanpour to compare the Veggie Tales with the Hamas Mickey Mouse.

In my no doubt alarmist and paranoid view, she is trying to position American and world Jewish support for Israel as essentially equivalent to American and world Muslim support for Hamas and for other Muslim terrorist organizations who also engage in humanitarian aid and social service projects. Just as the leaders of the Holy Land foundation are being tried as supporters of terrorist organizations in America today, Amanpour’s portrayal of Jewish support for an allegedly “illegal,” “racist,” or “apartheid” Jewish “settler state” with a “handful of Jewish terrorists” may now lead to similar attempts to shut down American-based fundraising for Israel and to dampen Congressional support for military foreign aid to Israel.

Perhaps Amanpour does not envision this at all but merely wishes to show that there is terrorism on both sides of the divide. But this is not true. While there is indeed a “handful” of “Jewish terrorists” or ideologue of Jewish reprisal, (Meir Kahane, Baruch Goldstein, Yigal Amir, and the Jewish Underground are named), such figures are just that–a handful, and their attempts at indiscriminate violence have either been prevented or immediately and seriously punished by the Israeli government.

Further, Amanpour fails to draw the right conclusions from what she does show on camera. In every instance, Israeli government officials, including former Shin Bet and IDF spokesmen are the ones who prevent Jewish terrorists from striking, who arrest and imprison them when they commit violence, who sentence them to between 7-15 years in jail or to life sentences. There are no posters all over Israel glorifying their violent deeds as there are on the West Bank for their shahids and shahidas and in the no-longer occupied Gaza strip. Israeli textbooks and television videos do not sing their praises in Israel as is the case among the Palestinians.

Hip-Hop Republican posts about “Mother Amanpour” and her Magical Kingdom.

Update
I simply never thought of drunkblogging it.

Amanpour completely fails to make the distinction between Islamists who teach hatred of infidels and women and who blow infidel and Muslim civilians up (as well as honor-murder their own women); Israelis who are under perpetual terrorist siege and who are trying to defend themselves against Islamist attacks; and conservative Christians who are trying to mobilize votes, change laws, or win hearts and minds with words, not bombs (although she certainly has lots of footage of the bloody bombings at abortion clinics–bombings I personally abhor and mourn–as do many Christians).

Amanpour wants us to like Muslims–even the most extremist among them. They are human, prick them will they not bleed? But she does not want us to like Christians or Jews, especially those who are Zionists.

The FBI has asked the public to be on the lookout for these two characters. The Seattle Post Intelligencer has refused to publish the pictures.

(Warning: disturbing photos at the link) Gerard Van der leun rips the SPI to shreds up one side and down the other.