Before Julia Child became known to the world as a leading chef, she admitted at least one failing when applying for a job as a spy: impulsiveness.

Details about Child’s background as a government agent come into the public spotlight Thursday with the National Archives’ release of more than 35,000 top-secret personnel files of World War II-era spies. The CIA held this information for decades.

Child’s file shows that in her OSS application, she included a note expressing regret she left an earlier department store job hastily because she did not get along with her boss, said William Cunliffe, an archivist who has worked extensively with the OSS records at the National Archives.

You probably always thought she was a great cook with a falsetto voice, but now you know she was also a spy.

Here she is making two of my favorite foods, steak and chocolate cake, in 1978:

Now excuse me while I finish breakfast. 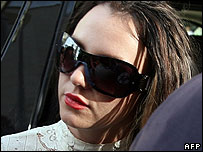