A proposed taxi medallion law would limit supply, increase prices for riders, and put hundreds of cab drivers out of work in Washington, DC:

The total number of medallions would be capped at 4,000, which would reduce the current number of cabs by more than one-third and put thousands of drivers out of business.
…
If that weren’t bad enough, most drivers wouldn’t have the option of buying a medallion. The first set of medallions would be offered for sale to the minority of cabbies who have been driving for at least five years and who live in Washington D.C. (Again the city government has no idea how many current drivers meet this criteria, but rising real estate prices and weak city services have led many drivers to leave the district.)

Who will be offered the next set of medallions, according to the bill? That would be cab companies, who could then rent medallions to drivers. This system would destroy the relatively open-access taxi industry in D.C., in which the majority of drivers are owner-operators free to make their own schedules and keep whatever money they earn on the job. In cities such as New York and Boston, drivers pay upwards of $800 a week to rent their medallion

Let’s go to the videotape,

President Obama has scheduled a 4-hour campaign stop in Puerto Rico tomorrow, as part of his campaign trip to Florida and North Carolina in the same day. Mickey Kaus posts,

Don’t run up the score too early, Mr. President: According to Politico, Obama’s attempt to woo Puerto Ricans with a vist to their home island “underscores the Obama campaign team’s effort to build some security into the president’s reelection bid.” Security? We’re at the “security” stage of the campaign now? I thought we were at the “desperately eking out a win somehow despite 9% unemployment” stage. …

The President is sweating it out in this recession. There are two reasons for this trip:
a. A $10,000/plate dinner at the Caribe Hilton, which aims to raise $1 million for his campaign (one local radio station said that at least $500,000 was already pledged days ago)
b. courting the 5 million Puerto Ricans like myself who live in the USA, as an attempt to counterbalance the Cuban voters in FL who traditionally vote Republican.

In other news from our Hemisphere,

Battisti in Hotel with Girlfriend, 26
Cesare Battisti leaves prison with antidepressant addiction, awaiting arrival of daughters from France, via Gates of Vienna

Hugo Chavez filled with pus and purulent matter: Gets surgery in Cuba

GUATEMALA
Impunity in Guatemala
Two steps forward, one step back

PERU
Peru’s presidential run-off
Victory for the Andean chameleon
Having reinvented himself as a moderate, Ollanta Humala has an extraordinary opportunity to marry economic growth with social progress

The week’s posts,
Hugo Chavez has emergency surgery in Cuba
Argentina and the Falklands: A background post
Mount Doom covers Chile, Argentina with ash
Again, the US wants Argentina and Great Britain to enter into negotiations over Falklands???
Peru’s markets tank after Humala win
The Mexican cartels’ cokemobiles: Homemade tanks

The best German engineering comes up with a better parking lot, via Maria, 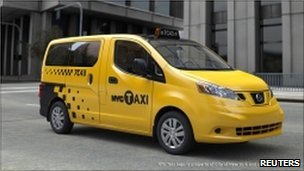 While New York Mayor Michael Bloomberg wants to send the illegals to Detroit, the city just picked the next taxicabs to be made in Mexico:
New York City picks Nissan minivan as next taxi cab
Japan’s Nissan Motor has won a contract to provide the next generation of New York’s famous yellow taxis.

The van, which beat US carmaker Ford Motor and Turkish manufacturer Karsan Otomotiv for the 10-year contract, will be phased in starting in 2013.

Mayor Michael Bloomberg acknowledged the Nissan NV200’s boxy form evokes suburbia, but he said the yellow paint would give it the iconic New York touch.
…
The NV200, which will be built in Nissan plants in Mexico, is the first to be designed specifically for use as a New York City taxi.

The deal is worth $1 billion, and the idea is that all cabs will be the Nissan mini-van.

There’s at least one cab driver who prefers to have a choice, instead of the uniform mini-van.

The Car for Idiots strikes again, this time going down in flames… twice,
Chevrolet Volt Bursts in Flames. Twice

Strangely enough though, sources say that after the initial fire broke and was put out, the Volt caught fire again, this time, apparently, from where the battery is located.

The mystery is deepened by the fact that before the first fire, the Volt was plugged in, recharging over night (as was the Samurai); in the second fire, however, the plug-in hybrid (what was left of it) was not connected to a power source.

It’s not enough that the steering wheel falls off, it also self-combusts.

Ah, for the days when Ralph Nader was talking about vehicles “unsafe at any speed.” Now we have progressed to just plain unsafe.

Publius Forum has the The GM WeeKann, soon to be unveiled.

Meanwhile, the government is having a fire sale on GM,
U.S. Hurries to Sell GM Stake

A sale within the next several months would almost certainly mean U.S. taxpayers will take a loss on their $50 billion rescue of the Detroit auto maker in 2009.

To break even, the U.S. Treasury would need to sell its remaining stake—about 500 million shares—at $53 apiece. GM closed off 27 cents a share at $29.97 in 4 p.m. trading Monday on the New York Stock Exchange, hitting a new low since its $33-a-share November initial public offering.
…
At Monday’s price, and taking into account shares sold during the IPO, taxpayers would lose more than $11 billion on the rescue if the government dumped the rest of its stake now. 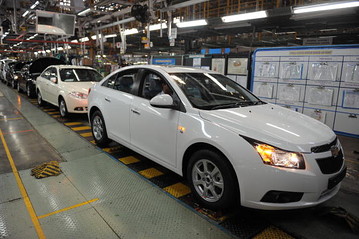 I’ve never understood why electric cars are supposedly more energy efficient, since you have to recharge the battery by plugging into the power grid. However, one shouldn’t underestimate the value of a placebo in soothing the green conscience.

So go ahead and get an electric car; just don’t be in a hurry to get anywhere:
London to Edinburgh by electric car: it was quicker by stagecoach
The BBC’s stunt of taking an electric Mini to Edinburgh reveals just how impractical rechargeable cars are, writes Christopher Booker

In its obsessive desire to promote the virtues of electric cars, the BBC proudly showed us last week how its reporter Brian Milligan was able to drive an electric Mini from London to Edinburgh in a mere four days – with nine stops of up to 10 hours to recharge the batteries (with electricity from fossil fuels).

What the BBC omitted to tell us was that in the 1830s, a stagecoach was able to make the same journey in half the time, with two days and nights of continuous driving. This did require 50 stops to change horses, but each of these took only two minutes, giving a total stopping time of just over an hour and a half.

In case you don’t know, the distance from London to Edinbugh is 332 miles. In US terms that means can get from Princeton today and be in Akron, Ohio (364 miles) by Friday, but only if you leave right now.

Just make sure you don’t turn on the heat, and wear longjohns.

You probably wonder who’s Victor, and what does he have to do with cash-for-clunkers?

Most Americans wouldn’t know it, but the Cash for Clunkers model originated in Europe in the mid-1980s. I was in charge of sales and marketing for Peugeot at the time, and the government-incentive idea was co-developed by my company, Renault and the French government.

Merci beaucoup for that beaut, Vic!

Now, here’s what happened: the automakers wanted a handout, and the labor unions and the environmentalists love it.

The losers were French taxpayers, but then they are accustomed to suffering in impotent silence.

As Hillary once said, “you don’t have to love it, you just have to toe the line”. Of course Vic was surprised when the Americans didn’t exactly embrace the idea,

When the program started in 2009, I admit I was surprised at the almost immediate outcry from economists, pundits and, yes, citizens, denouncing it as wasteful. They were, of course, right: It pulls forward new car sales, but it also scraps perfectly good, serviceable vehicles, thus lowering supply and driving up used-car prices.

In the U.S., the predicted volume was underestimated, the budget was woefully inadequate, and the government was unable to process payments in a timely manner. Cash for Clunkers quickly became a synonym for government overreach and incompetence.

What surprises me is that Vic is now saying,

In Europe, few question government intervention in industry or hold government accountable. In the U.S., as the tea party has shown, even if government doesn’t care about accountability, the citizenry does. And to that I say, Vive la différence!

What’s Vic doing about it? Nothing. Too bad he didn’t jump in and speak out when the cash-for-clunkers program was first proposed.

Thanks for nothing, Vic.

Cross-posted at The Green Room