And if you purchase through this link, you’ll help support my blog,

If this is true, it is crime at the highest levels, involving Venezuelan oil, the government of Puerto Rico, PREPA, and Puerto Rico’s FBI office and U.S. Attorney:

Richard Lawless, CEO of Commercial Solar Power, Inc., a company that was reportedly forced into bankruptcy by actions of the Puerto Rico Electric Power Authority (PREPA), which has been used to redirect as much as $100 million a year from the people of Puerto Rico to select government officials, asks, Did FBI and Justice Dept. Enable Puerto Rico’s Financial Meltdown? The FBI and DOJ stood by while government officials in Puerto Rico committed $11 billion dollars in financial fraud

On February 24, 2015, a private lawsuit was filed using the Racketeer Influenced and Corrupt Organizations Act (RICO), claiming government officials at PREPA stole over one billion dollars in public money over 10 years and committed one of the largest municipal bond frauds in United States history.

Some months ago, I received a call from a man stating he worked for the U.S. government, inferring he was with the Central Intelligence Agency (CIA).

I was told that Puerto Rico came on his agency’s radar years ago because the head of the PREPA fuel purchase office started making direct calls to the then-president of Venezuela, Hugo Chavez. An agency listened in and found out that PREPA was buying sludge oil from Venezuela and billing the utility for high grade oil. The difference in value—hundreds of millions per year (today it would be $700 million a year and is said to be still going on)—was allegedly kicked back to the fuel office manager and distributed to politicians and government officials on the island.

As the unnamed government agency continued to listen in on the calls, the caller claimed it became clear that family members of Puerto Rican FBI agents and family members in the Puerto Rico U.S. Attorney’s office were receiving payments based on these “kickbacks.”

He went on to tell me that the Puerto Rico’s FBI office and U.S. Attorney will do nothing about the oil kickback scheme and the bond rating scheme because they were participating in it.

Then there were the bonds,

Investors allowed PREPA to issue bonds. Then, PREPA borrowed from private banks to pay the bond’s interests, then borrowed from the Government Development Bank (GDB) to pay back the private bank loans. The GDB, in turn, issued more bonds to refinance all. Afterwards, PREPA would issue a new debt to pay GDB’s outstanding interests, pay principal and pre-pay the new bonds’ interests for several years—a cycle that is repeated over and over—and in which the original debt is never paid, the report outlined.

“This practice could constitute a fraud scheme for which the federal agencies that regulate financial instruments and the Security Exchange Commission could take action against and/or pursue civil suits against these institutions,” the report concluded.

On Monday, a senior source in a related U.S. government agency, speaking toCaribbean News Now on condition of anonymity, confirmed almost word for wordwhat I had apparently been told.

$70 billion in the hole and counting,
Puerto Rico, Bondholders Remain at Odds. Commonwealth and creditors are still far apart, as they seek to resolve a standoff over $70 billion in debt

Puerto Rico’s Government Development Bank on Tuesday disclosed terms of various restructuring proposals discussed in negotiations that have ended. The talks included a committee representing investors in the commonwealth’s general obligation bonds, a group holding senior sales-tax-backed, or “Cofina,” bonds, and a single investor with large holdings of general obligation bonds and junior Cofina bonds, according to the disclosure.

Uncertainty about a looming U.S. congressional vote on a restructuring framework for Puerto Rico has made it difficult for the island to come to terms with the various creditor groups, investors and analysts said. Neither the island nor its bondholders are likely to agree to a deal until rules are worked out on Capitol Hill, they said.

In a 5-2 ruling, the justices said that although the government and people of Puerto Rico should not have to wait for possible congressional action to avert a financial crisis, the Constitution does not allow them to rewrite a statute that Congress enacted in 1984.

While states can allow municipalities to seek such debt relief, the lower court said, Congress had not given Puerto Rico that right.

Puerto Rico had long been included as a state under the bankruptcy code, but Congress amended that definition in 1984 to exclude the territory.

The island has more than $72 billion in outstanding debt, with public utilities accounting for $20 billion of the total. Seeking to alleviate that burden, Puerto Rico enacted legislation in 2014 that would have provided the island’s electric and water utilities an alternative way to restructure their debts.

Investors filed a legal challenge to that measure, citing the 1984 law. The Supreme Court on Monday affirmed a lower court ruling that found the utilities cannot restructure the debt under federal bankruptcy rules.

Which means that PR’s government ought to stop spending like there is no tomorrow.  But spend they will.

For decades, Americans have relied on Land’s End for three things:

Enter Land’s End’s new fashion-forward CEO, who asks, “Who would wear that?”

Puerto Rico is $72+billion in debt, and defaulted last month on a $422 million debt payment for the third time. Governor Alejandro García Padilla calls it “a humanitarian crisis,” continues to spend like crazy, wants Washington to bail him out, and won’t act to reduce the size of government, the cost of energy, or the cost of doing business in the island.

Instead, he goes to Cuba to praise Raúl Castro and intends to open a commercial trade office in Havana. Of murderous Raúl, AGaPito said,

“He’s very affable, very courteous, a pleasure to meet.  He not only took the time to converse with me, but even showed deference by taking me aside so he could speak to me alone.”

Historically, Cuba has defaulted on all its debts. I hope Carlos Eire doesn’t mind, but I must steal his photo:

Not all imbeciles are communists. Going by the evidence, I’d say AGaPito is a communist imbecile. 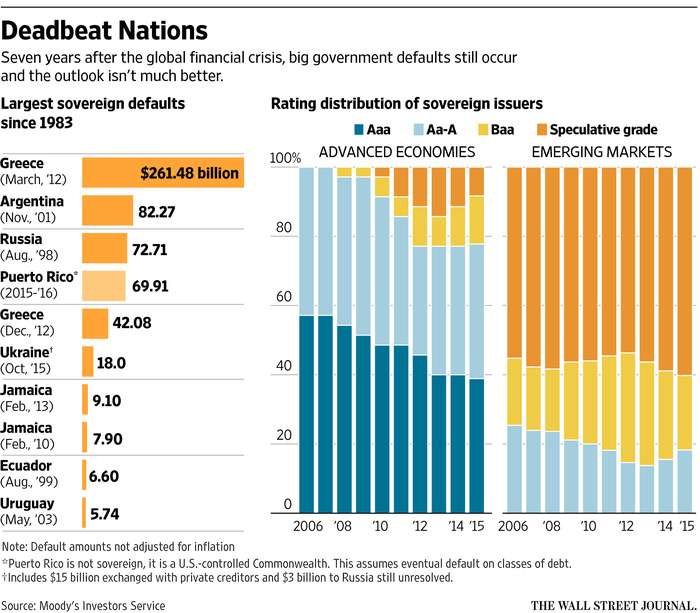 Bacardi, Pernod Ricard Spar Over Rights to Rum Name. Big-money clash arises over who gets Havana Club brand in U.S.

A multimillion-dollar expansion of warehouses and bottling lines anticipates a reopening of the American market to the Cuban brand, said Asbel Morales, rum master at Havana Club International, a joint venture between the Cuban government and Paris-based distillerPernod Ricard SA. “We just need to know when we can enter.”

But that very prospect has inflamed a decades-old battle between Pernod Ricard, the world’s second-largest spirits producer behind Diageo PLC, and Bacardi Ltd. over ownership of the Havana Club name.

Pernod says a 1993 deal with the Cuban government gives it rights to sell the Cuban-made rum around the world, including the U.S., where sales of the brand currently are blocked by the 1962 trade embargo.

Bacardi, started in 1862 by one of Cuba’s oldest families, says it owns rights to the brand after buying it from Havana Club’s founding family, the Arechabalas, who, like the Bacardis, fled Cuba when Fidel Castro’s government nationalized the island’s distilleries in 1960. The distiller has sold rum under the brand name and made it in Puerto Rico off and on since 1995.

Expect a lot more of these in the future.

We talked about it in last week’s podcast.