Puerto Rico has voted for statehood in the past, but the island continues to shoot itself in the foot:

Puerto Rico’s government-owned electricity monopoly—known by the acronym Prepa—filed for bankruptcy protection July 2. It did so even though it had negotiated a restructuring agreement with creditors that would have saved $2.2 billion in debt service that could have been used to invest in modernizing the utility.

In a democratic, market economy that would be weird. But Puerto Rico is now run by a seven-member, unelected federal board under the Puerto Rico Oversight, Management and Economic Stability Act, or Promesa, passed by Congress last year. On June 27 that board unilaterally rejected the restructuring agreement, leading the company to declare bankruptcy.

Behind these decisions is a belief that if the commonwealth can clear its balance sheets by giving creditors only a fraction of what they are owed, Puerto Rico’s access to the capital markets will resume. Seriously.

That is, ignore the Promesa Act law, ignore creditors’ rights, don’t cut spending, and hope the Dems will bail out the island and bring it to statehood so the Democratic Party can have two more senators and the corresponding representatives.

While resuming access to capital markets as the country’s largest deadbeat.

Good luck with that, skippy. 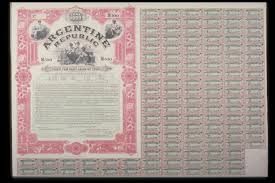 Today’s “what the hey?” story:

Argentina sold $2.75 billion of a 100-year bond on Monday, just a year after emerging from its latest-default. You read it right: from its latest. Last year’s was the seventh time, since the country has defaulted on its bonds from the get-go:

ARGENTINA’S first bond, issued in 1824, was supposed to have a lifespan of 46 years. Less than four years later, the government defaulted.

“As a matter of record, Argentina has defaulted on its foreign currency debt seven times since independence 200 years ago, and five times on local debt, its longest stretch without default was ca. 50 years…. as they say somewhere ‘you do the math’!”

The Argentinian economy recently failed to win back its status as an emerging market in the influential MSCI benchmark equity index posing a contrast to the success of the launch of its 100-year bond. The failure is a setback for President Maurico Macri who has implemented several market-friendly reforms to deliver on his promise of reforming the country’s economy after years of heavy intervention and non-payment of of international debt obligations under the previous government.

He ended a decade-long dispute with creditors that allowed it to re-enter global credit markets, but Argentina lacks an investment grade rating. S&P and Fitch rate the sovereign a B with a stable outlook, while Moody’s has the debt at B3, according to Reuters.

In other words, junk bonds.

What can anyone owning their brand new 100-year Argentinean bond expect? A couple of defaults, at least one war, and probably a revolution as well. The chances of collecting your 8% every year through all that? Perhaps not quite zero — but surely something very close to it.

Quite frankly, I am baffled; there is no way the country can remain solvent for the next century.

Matthew Lyn calls is “a sure sign of a market gone crazy.”

An interesting article on what Peru has done well,

Why foreign investors choose Peru and not, erm, Uganda?

And yes, Peru’s recent economic burst can be attributed to high commodity prices and massive Chinese spending. But herein lies the kernel of Peru’s success. Institutions and reforms were implemented prior to the commodity boom, ensuring Peru could reap the full benefit of the price surge.

A rigorous programme of trade liberalisation and business friendly policies, including a complete overhaul of the mining sector in the early-2000s, helped boost investments and exports of copper and iron ore. Strengthening crucial institutions such as the tax authority and the regulatory regime have institutionalised reforms, encouraging economic diversity and deepening accountability.

The next wave of sectoral reform – following mining – is already under way in agriculture. This has spurred widespread innovation and has transformed a country of subsistence farmers known for its discovery of the potato into a globally competitive agribusiness. Peru is the world’s leading exporter of asparagus, the second largest exporter of avocados and a major producer of coffee, grapes and a wide range of other fruits and vegetables. Agricultural exports of Peru, a nation of 31-million, totalled nearly $6-billion in 2016. By comparison, Uganda’s agriculture exports, making up 80% of its total exports, were just $1.8-billion.

The Dow Jones Industrial Average has broken through 20000 intraday for the first time in its history.

Varney & Co. are having a ball.

Unemployment in Mexico fell to its lowest level in nine years in October amid strong private-sector job growth that has supported consumption and helped keep the economy expanding.
. . .
The jobs numbers and an apparent stabilization of the balance of payments suggest the economy may not be performing as far below capacity as generally perceived, although an expected economic slowdown and uncertainty following the election of U.S. President-elect Donald Trump could begin to undermine a so-far resilient labor market, he added.

Mexican cement firm Cementos Chihuahua says it is prepared to help US President-elect Donald Trump fulfill one of his key election pledges: to build a wall along the 3,000 kilometers of border that runs from Tijuana-Imperial Beach on the Pacific to Matamoros-Brownsville on the Gulf Coast.

“We cannot afford to be choosy. We have to respect our customers on both sides of the border,” said Cementos Chihuahua’s CEO, Enrique Escalante in an interview.