Everybody is talking about “Hamilton” today because of this,

Tonight, VP-Elect Mike Pence attended #HamiltonBway. After the show, @BrandonVDixon delivered the following statement on behalf of the show. pic.twitter.com/Jsg9Q1pMZs

Ironic, isn’t it, that the guy giving the speech plays the character who killed the author of the Federalist Papers essay on the electoral college.

So, as a value shopper, here’s what you can get for $1188.60 in Manhattan, in locations where the staff is instructed to not lecture you about politics,
Nineteen dinners at the Brooklyn Diner on 57th Street (entree, salad, wine, tax and tip). (Note: I like the Brooklyn Diner.), or,
Six nights at AirBnb or two nights at the Marriott East Side., or,
Two little black dresses at Bergdorff‘s ($417 + tax each), leaving you some change, or,
Three center orchestra (second row) tickets to the Met Opera’s spectacular Aida ($286 + tax each), plus $90 for three glasses of champagne during intermission.

So for one $1188.60 “Hamilton” ticket, you and your date can get a good dinner, go to the opera, have a drink, spend the night in the city, and have money for a cab. Price of a new dress not included.

Jerry Orbach, from the original Chicago, back in the 1970s,

So it’s January and the Broadway shows who were hanging on by a thread hoping for an award nomination, or waiting for the last of the holiday business to finally fade, close.

This year 13 shows have closed so far, including “Spamalot,” “Hairspray,” “Spring Awakening” and “Young Frankenstein.” You can get same-day tickets to most any show. Business is down in the Great White Way.

So what do the Dems in Albany propose?

You guessed it – a new theater tax! Which would raise ticket prices by 8%.

The NYT editors don’t like that idea, so they propose instead … a price subsidy

even to subsidize the price of tickets so that less-wealthy theater lovers could afford to go. My latest post, My Mom and Frank is up at LadyBlog. Go read it and leave a comment!

Maybe Obama is not the Messiah, precisely, but a suffering martyr for liberty–Jean Valjean, in fact, Victor Hugo’s hero in Les Miserables signing “One Day More” with the rest of the cast: “One more day to revolution,” etc. etc.

Here’s a question. Is Mr. Walsh’s skit life at Obama’s HQ just before the on election a spoof, as it some people have described it? Or is an homage?

For those of you who haven’t seen it yet, here it is:

The scene above takes place at “Obama National Headquarters” on “November 3, 2008”, the night before the election.

Now, if you have seen Les Miz on Broadway you’d know that the eager revolutionaries got wiped out right after that song.

NOT a good metaphor for any electoral campaign.

If only Jibjab would do Bill & Hillary, they of the Lincoln bedroom, singing Master of the House:

As it turns out, Fox Movie Channel was playing back-to-back film adaptations of Les Miserables. The first one was the 1935 version with Frederick March and Charles Laughton, on which the Broadway version is based. The second was a pretty dismal 1952 British version that curiously skipped anything having to do with France.

Just got back from seeing Macbeth on Broadway. Spectacularly good production, and Macbeth is very clearly a Stalinist. Patrick Stewart was at least as good as I expected, and does fabulous work with props.

He decants the wine when talking to Lady Macbeth before plotting the first murder. Their relationship is very sexual but that diminishes as their thirst for blood and power takes over. 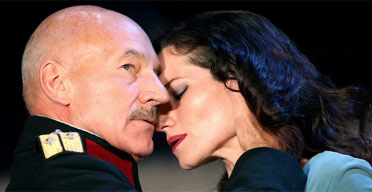 Banquo’s death becomes a topic to discuss while making a sandwich; here’s how he did it:

Macbeth, talking to the two murderers, takes a sandwich board out of the refrigerator.

The sandwich board has a loaf of rye, bread knife, mustard pot, dish of mayo, plate with sliced cheese, and spatulas for spreading.

I did so, and went further, which is now
Our point of second meeting. Do you find
Your patience so predominant in your nature
That you can let this go?

Are you so gospell’d
To pray for this good man and for his issue,
Whose heavy hand hath bow’d you to the grave
And beggar’d yours for ever?

We are men, my liege.

Ay, in the catalogue ye go for men;

Speads mayo on one slice…

As hounds and greyhounds,

All by the name of dogs: the valued file

picks up one slice…

the slow, the subtle,

puts it on the bread…

the hunter, every one

picks up another slice of cheese, puts on top.

According to the gift which bounteous nature
Hath in him closed;

Spreads mayo on the other slice of bread

whereby he does receive
Particular addition. from the bill
That writes them all alike:

Puts another cheese slice on the first slice of bread

and so of men.
Now, if you have a station in the file,
Not i’ the worst rank of manhood, say ‘t;
And I will put that business in your bosoms,

Spreads mustard on the cheese

Whose execution takes your enemy off,
Grapples you to the heart and love of us,

Places both slices of bread together

Who wear our health but sickly in his life,
Which in his death were perfect.

Slices the sandwich in half.

Walks in front of the table.

Both of you
Know

Takes a big bite and says with his mouth full,

By the time he slices the remaining half of the sandwich in half and gives each quarter to the murderers, Banquo’s fate is sealed.

Later in the play, his conscience starts to catch up with him and after the intermission he can not touch his soup.

Of course the rest of the production will knock your socks off, but he had me at the sandwich.

A friend and I were discussing over the phone just now the Phantom of the Opera. She shares my opinion that Howard McGillin’s the definitive Phantom.

This post is dedicated to my friend S, and to Mamacita, another Phantom fan who’s fond of mysterious men in capes.

Slowly, gently, night unfurls its splendor
Grasp it, sense it, tremulous and tender
Turn your face away, from the garish light of day
Turn your thoughts away from cold, unfeeling light
And listen to the music of the night

Close your eyes,
And surrender to your darkest dreams
Purge your thoughts of the life you knew before
Close your eyes, let you spirit start to soar
And you’ll live, as you’ve never lived before

Softly, deftly, music shall caress you
Hear it, feel it, secretly posses you
[Music Of The Night lyrics on http://www.metrolyrics.com]

Open up your mind, let your fantasies unwind
In this darkness that you know you cannot fight
The darkness of the music of the night

Let your mind start a journey through a strange, new world
Leave all thoughts of the life you knew before
Let your soul take you where you long to be
Only then can you belong to me

There Will Be Blood has all the markings of a movie that will sweep the Academy Awards:
1. It’s based on a novel – Upton Sinclair’s Oil (no, I haven’t read the book).
2. It spans decades.
3. It’s a tour de force for its star, who is unkempt, unshaven, and for the most part, unwashed. And he looks like he wasn’t wearing makeup, too.
4. It has vast landscapes of barren land that serve as a metaphor for the soul of the protagonist.
5. It’s billed as “A sprawling epic of family, faith, power and oil”.
6. It’s a period piece.
7. And you can write a whole thesis on how the oil relates to oil wars, family dysfuction, the American psyche, religion(*), yadda yadda yadda.

The movie starts with a twenty-minute sequence without dialogue, so it will appeal to film students, too.

All the actors were very good: Paul Dano does a spectacular performance of a man torn by the spiritual and the temporal. Dillon Freasier is very engaging as the young son. Ciaran Hinds doesn’t have much to say but looks handsome in his own somber way. Daniel Day Lewis will win another Oscar, of course, since he’s on screen for 90% of the movie, some of it chewing up the screen in artistic ways.

The soundtrack was rather eccentric, combining modern dissonance with classical violin tracks. There is no musical cliche unturned when it comes to manipulating the audience, or so it seems. The photography was excellent.

Having said all this, There Will Be Blood is not so much a drama as it is a lengthy session of tedium interspersed with segments of vivid, dramatic intensity, some of it predictable (you know someone’s going to get hurt in the wells), most of them involving a sociopath.

Armond White has more to say on the whole tedious mess.

As I said, it’ll sweep the Oscars.

(*) Exodus 7:19-25 is the passage where Moses unleashes the seven plagues on Egypt. It starts,

That will certainly give it a much dramatic title that plain old “Oil”.

The men in There Will Be Blood didn’t have access to a barber and the film didn’t show much much blood, but the blood flowed abundantly in Sweeny Todd, The Demon Barber of Fleet Street.

I had seen Sweeney Todd on Broadway back in the year dot starring Angela Lansbury and Len Cariou, and, while I wasn’t crazy about the Sondheim music and the plot, Lansbury/Cariou were immensely entertaining, dramatic, funny and tragic at the same time. Johnny Depp does a nice enough job but seeing the film version was just setting myself up for a disappointment. Angela’s Mrs. Lovett was no one’s victim, no matter her demise; Helena Bonham-Carter’s thin voice doesn’t help either.

By now I’ve seen enough of Tim Burton’s schtick to recognize his cinematic bag of tricks.

The rest of our group didn’t like the copious amount of blood to the point that they hated the movie.

And let’s be glad Alan Rickman’s not going on a singing tour.

Sweeney has his own My Space page. Enough said.