Bloggers United for Cuban Liberty (BUCL) extends its support and solidarity to the Cuban Dissident Dr. Darsi Ferrer on International Human Rights Day Monday, December 10. To commemorate this day, protest marches are being held to denounce what protestors are calling the immoral and illegal segregationist policies imposed by the Cuban government.

“In Cuba, apartheid is not racial, but political,” says Henry Gomez of BUCL. “The political system keeps foreigners and Cubans separate. For instance, many public accommodations that are open to tourists and high-level Communist bureaucrats are off limits to everyday Cubans.”

Protest marches will be held in Havana at the park on Calzada between D and E (Vedado), in Miami at the Graham Center at Florida International University (FIU), and in Los Angeles at 202 West First Street. The marches will begin at 11:00 am EST (8:00 am PST). For information on other marches, visit http://BUCL.org.

Basta de apartheid en Cuba has information on the demonstrations, which will take place in Miami, New York, San Juan, Seville and Madrid.

We are wearing white bracelets with the word “CAMBIO” (change) in solidarity with the event.

Much more at Babalu.

Gomez didn’t get a chance to tell Sting personally, but according to the latest posting on his blog, Gomez had the chance to talk to guitarist Andy Summers.

“While we were in the middle of reading the names of the 300 political prisoners, one of my best buddies approaches me and says, ‘Andy Summers is here.’ Andy Summers is the guitarist of The Police. It turns out that he was simply there to have dinner at Miami’s most famous Cuban restaurant. I politely approached him in the foyer before he was seated. I told him we were having a candlelight vigil outside, precisely because he and The Police are in town,” said Gomez.

“He listened patiently as I explained that Amnesty International recognizes 69 prisoners of conscience in Cuba and that in our Miami community there are close to 1 million Cubans who fled the human rights abuses in that country. He told me that the Cuba concert is not a certainty. I told him that we weren’t protesting the concert but appealing to them to stand up for human rights in Cuba like they had in the past for other countries. I asked him to share the message with his band mates and he said he would. The entire exchange took no more than 90 seconds while he waited for his table,” Gomez posted in his blog.

According to a 2007 Amnesty International report on Cuba, there are an estimated 69 political prisoners being held in jails throughout Cuba.

Gomez said the BUCL is not necessarily calling for The Police to call negotiations for a free concert for the people of Cuba but rather set the rules of their appearance.

“If you’re invited to play for regime you should set the terms in which you will perform — that you can say whatever you want when you are on stage, those are not unreasonable terms to make,” said Gomez.

According to Gomez, Summers said the Havana concert was not a sure thing and that he promised to relay the group’s views to Sting.

Read more about it at the BUCL site, and at Babalu Blog

The video shows the Ladies in White/Damas de Blanco, who won the Sakharov Prize for Freedom of Thought from the European Parliament in 2005.

UPDATED
Scroll down for podcast
Tonight at 8:30PM in Miami, FL, Bloggers United for Cuban Liberty (BUCL) are holding a candlelight vigil for Cuba’s past and present political prisoners with an appeal to Sting, singer of The Police, to advocate for human rights on the band’s concert in Havana Miami scheduled for tomorrow.
Correction The Havana concert is not scheduled yet; tomorrow he’s playing Miami.

Ponder that for a moment: Sting, yoga practitioner and human rights activist in the 1980s, is playing in the island prison. This is the one opportunity that Sting has to show what he’s about. Let’s hope he’s not one of these.

And the fans are calling him on it: Fans Call On ‘The Police’ For Liberty Of Cubans

Henry Gomez and Alberto de la Cruz are both huge fans of Sting and the Police. They are also both bloggers who advocate democracy in Cuba, and when they heard their favorite band might be performing in Havana, they had an idea.

“We really want to appeal to Sting, The Police and their better angels to do what’s right,” said Gomez, of Bloggers United for Cuban Liberty.

What they want is for Sting and The Police to take up the cause of Cuba’s political prisoners, people such as human rights activist Dr. Oscar Elias Biscet, who is serving a 25-year-sentence.

“The Cuban political prisoners right now are largely being ignored by the media and the world, and we want to bring that to light that they are not invisible, that they do exist,” said his partner Alberto de la Cruz.

The bloggers have launched an awareness campaign to coincide with the band’s concert in Miami July 10th. They call it the Campaign for the Invisible Ones, a name taken from the lyrics of a song Sting wrote in honor of the Chilean mothers whose sons and daughters disappeared during the Pinochet dictatorship in Chile.

Henry has a video you must see:

Here is their Campaign Fact Sheet.

While the Cuban government insists that there are no political prisoners in Cuba, Marc Masferrer has a list of journalists now in Cuban prisons. I have posted extensively on the subject.

Cuba has an apartheid medical system, which Castro apologists ignore even when eyewitnesses clearly attest to the facts. And now Michael Moore’s croc makes some wonder if there is a way to take that knee-jerk sting out of the phrase “socialized medicine.”

Does it come down to an illness of the soul?

The apologists of tyranny are again hard at work trying to redeem the one of the last outposts of communist enslavement. They see a “worker’s paradise”; a “healthcare utopia”, but underneath the civilized veneer of Castro’s Cuba is the same deadening illness of the soul that infected all the other failed communist and socialist “paradises”.

And for that illness, the only cure is Freedom.

We’ll see what Sting is all about in a day or two.

If you are in Miami tonight, the demonstration is in front of Versailles on 8th Street.

UPDATE
Since my podcast guest couldn’t make it, I dedicated my podcast to this subject.
You can listen to the podcast here

Gerard Van der leun of American Digest will be my guest next week. 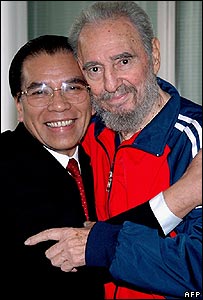 As in previous recent “apperances” Fidel’s suits had not come back from alterations or the cleaners, and he was posing with officials from Communist countries.

Matt Lauer’s in Cuba today and wants your questions. Maybe Fidel will drop by, wearing Addidas. Maybe Matt could ask him about organized terror groups in Cuba.

And if he doesn’t show up, there’s a good question for Matt.

Check out the blogburst.

Billboards to Highlight Spanish Complicity in Cuban Exploitation
May 18, 2007, Miami, FL – The Spanish government is being denounced by Bloggers United for Cuban Liberty (http://bucl.org) in a new advertising campaign aimed at educating the public about oppression in Castro’s Cuba.

The multimedia campaign, unveiled today, consists of bus shelter panels that target areas near the Spanish consulate and the Spanish Cultural Center, both in Coral Gables, Florida. An online component, launching today, will steer readers searching for certain information about Cuba and Spain to BUCL.org.

“This effort marks the first of several coordinated activities aimed at exposing those countries, companies and institutions that aid and abet the Castro regime in oppressing the Cuban people,” said Henry Gomez, the spokesman for Bloggers United for Cuban Freedom. Gomez continues:

“Spanish businesses are dealing directly with the Castro regime and are helping perpetuate Cuba’s totalitarian system by complying with that country’s unfair labor laws and enforcing an apartheid system in which Cubans are not allowed to use the same facilities as tourists. From the Spanish perspective, there is no reason to pursue change in Cuba, they are benefiting from exploitation of Cuban workers and would like to see the status quo perpetuated.”

The Socialist Spanish government of Jose Luís Rodríguez Zapatero has been leading an effort to normalize relations between the European Union and Cuba. Those relations have been strained since the Castro regime’s crackdown on and jailing of 75 dissidents and independent journalists in 2003. In April of this year, Spain’s foreign minister Miguel Angel Moratinos visited Cuba and met with Raul Castro, while noticeably snubbing Cuban dissidents that had requested a meeting with him.

“It’s important for the Spanish government and business interests to know that freedom-loving Cubans will not forget who conspired with the Castro brothers and against their liberty when the inevitable fall of the dictatorship comes,” said Val Prieto, editor of BabaluBlog.com and member of Bloggers United for Cuban Liberty.

If you want to see how Spanish advertising sees Cuba, take a look at this ad posted at the BUCL website

Update, Monday 21 May: Lady Godiva (in Spanish) and Gateway Pundit have more.