The man on the left holds a sign that reads “WE NEED YOU OSAMA” on his left hand, and on his right hand a photo… of whom? When the official photo was released on February, AP described it,

But then, as we know, Hugo {hearts} Hamas, and love is a two-way street. 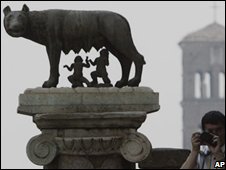 Congress shall make no law respecting an establishment of religion, or prohibiting the free exercise thereof; or abridging the freedom of speech, or of the press; or the right of the people peaceably to assemble, and to petition the Government for a redress of grievances.

Since here in the USA (and in Puerto Rico where I grew up) we are so accustomed to these words and so committed to the concept that Congress can pass no law limiting freedom of speech, we naturally assume that the rest of the Western world enjoys the same basic freedom.

However, that is not the case.

As you can see in today’s posts, there are countries in our hemisphere where the individual has no rights at all, and countries where the government is revising the school curriculum to create a “new man” who will think only certain ideas.

In Europe, today French judges justly decided that the French government’s own TV station was wrong to have sued for libel a French citizen that exposed the TV station’s dowright lies – lies which ignited an intifada in Israel. Few Americans – used as we are to view news as entertainment – realize how important this is.

The French judges’ decision in the Al Dura trial is vitally important because it exposes a most destructive libel against Israel. Freedom of expression, which Karsenty had to fight for in court, twice, is what allowed the libel to be shown for what it is.

At the same time, radical Islamists have rioted and killed over the Mohammed cartoons. They believe that we non-Muslims are inferior to them, and as such do not have the right to freely express any ideas that might offend Islam. The demonstrations took place in countries around the world, including some protests here in the US.

Freedom of expression is a dangerous concept to the totalitarian mind. It is inimical to any totalitarian state. The court ruled that freedom of the press, as protected by article 25 of the Belgian Constitution, does not apply to cartoons because article 25, which dates from 1831, applies to “writers” but not to illustrators.
…
Judges Valvekens, De Ridder and Morel of the 20th Chamber of the Court of First Instance in Brussels ruled that “The cover illustration cannot be considered to be a direct expression of a thought or opinion” protected by the freedom of the press because

“Article 25 explicitly refers to ‘the writer.’ The illustration used on the cover is merely a depiction of a person, and not a writing, to which the exceptional status that applies to offences relating to the printing press has no effect.”

According to the Brussels court, the freedom of the press is an “exceptional status” in Belgium. It only applies for writers, not illustrators, and only for written thoughts or opinions disseminated by means of a printing press.

While you, gentle reader, are probably thinking that this will never apply to you because after all, you’re not about to move to Belgium, you should also be aware that activist judges in the USA can go against the will of the people and can attempt to rewrite the “living Constitutions” of the states or of the nation.

What if an activist judge in someone’s pocket decided that rights are to be accorded exceptional status here, in our country, because (for instance) the internet is not meeting their definition of “speech” or “press”? Can we afford to be complacent about our freedoms?

We can not take our freedom for granted. Because the moment we do, it can all be lost.

No fireworks in Belgium, but there was a party in Iraq 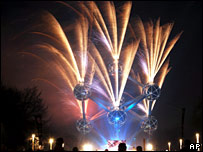 In a safer Baghdad, Iraqis party for 2008

2008 arrived in a less-violent Baghdad, and residents said it was the first real party they had seen in years.

At the stroke of midnight, exuberant locals fired into the air with automatic rifles, sending red tracer fire streaking over the city, as fireworks lit up the sky.

While the city is still far from peaceful and many of the festive gatherings had a tentative feel, many said it was a happier occasion than they could have dared to hope just a few months ago.
…
Belly dancers also took the stage, and revelers showered a female singer with dinar notes, the Iraqi audience’s ultimate sign of approval.

Traditional New Year’s Eve fireworks in the Belgian capital Brussels have been cancelled because of a security alert.
The Christmas market will close at 1800 instead of staying open all night, and even the ice rink will close early.

“We are still facing a potential threat,” a spokesman for the Belgian capital said.

The alert follows police saying they had discovered a plot to free a jailed al-Qaeda suspect, Nizar Trabelsi. He has denied any such plot.

Last week police detained 14 people suspected of taking part in the alleged plot. But a judge said there was not enough evidence to hold any of them.

“Not enough evidence to hold any of them”, but let’s cancel the party anyway?

Too bad the Belgian authorities weren’t in New York City on December 31, 2001. They might have learned a thing or two.