Bear Grylls fans will eat it up!

Long-time readers of this blog know I’m fond of the Man v. Wild and crazy guy Bear. I get lots of visitors looking for “Bear Grylls naked”. He’s not naked, he injured his shoulder (via Jawa & SYLG):
‘Man vs. Wild’ host injured in Antarctic expedition

Adventurer and TV show host Bear Grylls injured his shoulder in Antarctica during an expedition to raise money for an international charity, the Discovery Channel said Sunday.

Bear Grylls, host of “Man vs. Wild,” was injured in Antarctica during an expedition to raise money for charity.

Grylls was injured Friday night after falling during the expedition, which was not for the Discovery Channel, according to the network’s statement.

The statement said that Grylls is returning to the UK to receive medical attention.

Let’s pray for a quick recovery, so he’s back jumping into a frozen pond soon.

My latest post at LadyBlog, Remote Control, is up at LadyBlog. Read it and comment, if you please.

It’s that time of year: dozens of Bear Grylls fans come to my blog looking for “Bear Grylls naked.”

Unfortunately I don’t have any still photos of the very delectable Mr. Grylls in the buff.

However, here’s a nice YouTube of behind the scenes in Patagonia:

And let’s not forget the naked scene of the same episode:

Unfortunately they blurred the naughty bits.

He also sings “I love a-rach-nids” in the Discovery Channel ad:

I wonder where he goes on vacation.

I should be catching up on homework but why do homework when instead one can post about Bear Grylls?

I knew it was time for a new season of Bear Grylls on the Discovery Channel when a lot of people suddenly started coming to my blog this past week.

Mr. Grylls has a blog, where he looks gorgeous while grimy:

I routinely train for three to four hours a day to keep my physical fitness at the level needed to sustain the pace of each shoot; this routine includes weights, running, yoga, rucksack runs, yomps, and circuit training.

What are yomps, I wonder?

Unfortunately he hasn’t updated it for a while. Fans will be more satisfied with the Discovery Channel website.

Here’s an interview on his latest Everest romp:

“Naked, with a pair of boots and a trenchcoat” will certainly bring more viewers to any blog or website that shows him in that. There’s a persistent couple of people who keep coming to my blog looking for “Bear Grylls naked”.

Maria sent me this:
Reuters’s Andrew Wallenstein is shocked, SHOCKED! that Bear Grylls spent a night or two in a motel:

But this British adventurer is now the subject of an investigation by U.K.’s Channel 4, which already has confirmed that Grylls checked into motels on a few occasions when he was depicted on TV having slept under the stars.

Considering how, when I watch the program, I sit there hoping Bear would be staying in a motel, I’m actually relieved to hear it.

Andrew’s outrage comes from his belief that,

“Wild” restored a sense of realism to being marooned and sold us on the fantasy that we could learn the actual skills for survival.

Perhaps the show restored Andrew’s belief that he could learn the actual skills for survival. Every time I’ve watched that show it has restored my belief that I would have been dead by the first ad break.

I look forward to the 3rd Man Vs Wild season.

Thank you to the friend (and Bear fan) who prefers to remain anonymous.

Yesterday three dozen people came to my blog from googling “Bear Grylls”, plus two who were searching for “Bear Grylls naked”.

At first I was puzzled as to why the sudden interest, but later last night when I was watching Mythbusters, I realized that Bear’s new season starts tomorrow.

EVERGLADES: This premiere episode finds host Bear Grylls stranded in the swamps of the Florida Everglades, where each year at least 60 tourists need to be rescued. With more than a million alligators, thousands of snakes and even black bears roaming these waterlogged lands, the area has more than its share of hazards. Bear demonstrates how to keep alligators at bay, deal with vicious razor-sharp grass and find stomach-churning food that will keep you alive if you find yourself stranded in this beautiful but dangerous destination.

The first thing I’d do if stranded in the Everglades would be calling my sister on the cell phone, since she lives in the area. But then, she’d probably come along so then the two of us would be stranded.

The Phoenix is quite insulting, calling Bear “English boy adventurer”.

Over on the Discovery Channel, English boy adventurer Bear Grylls backflipped off a chopper into the ultramarine waters of the Pacific, swam two miles to a desert island, scaled a cliff, descended through the root system of a banyan tree, and finally found a hospitable little cove, where he subsisted for a few days on coconuts and tiny fish ( MAN VS. WILD , Friday at 9 pm). A juicy turtle passed within harpoon range, but Bear courteously forwent a feast on account of the turtle’s position on the endangered-species list. Both Bear and Criss, as they go about their respective tasks, make a selection of animalistic grunts and coughs. Shinning down the coconut tree seemed particularly hard on Bear, who grimaced against the chafing bole and warned the viewer against it “as a bloke.” 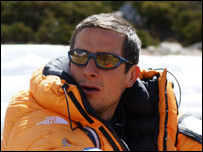 Bear Grylls, who at the age of 23 became the youngest British climber to scale Mount Everest in 1998, achieved a feat that had been deemed impossible by many critics prior to the mission.

The Telegraph carried his arcticles,Flying into a dream and has a video you can watch here

Here’s a selection of books authored by Mr. Grylls,

I haven’t found Man Vs Wild on DVD yet, but when I do I’ll link to it.

Meanwhile, if Mr. Grylls is reading this, please email me at faustaw-at-yahoo-dot-com. I’d love to have you as my podcast guest.

————————————————-
In other diversions, I have become addicted to Facebook. I’m learning the ropes and just this morning asked a question, but then I made a mistake and the question got sent to all my friends, which probably means I’ve annoyed everyone early in the morning. My apologies to all.