I was reading a transcript of the interview Hugo Chavez gave to Stephen Sackur of the BBC in advance of Caracas premier of the Oliver Stone propaganda film South of the Border.

The one thing you can discern from Chavez’s answers is that he doesn’t answer what he’s been asked. For instance, when Sackur asks about the Venezuelan economy, Chavez carries on about Europe.

SS: I want to begin by asking you about the Venezuelan economy. You have a serious problem with inflation, you have a currency that’s been devalued and your country is still in recession, is it fair to say that socialism, right now, is not working?

HC: I think you have more problems in England and in Spain and in the whole of Europe, it’s disastrous, the US has more problems than we have here. We’ve had an economic growth rate over the last six years of 7.8% GDP just to give you an example.

In fact, as the BBC article points out,

Venezuela possesses the biggest reserves of oil outside the Middle East and supplies more than one-tenth of US oil imports, but still the economy has woefully underperformed against others in Latin America in the last two years.

Inflation has leapt to 30% and seems likely to rise further. The Venezuelan currency has been devalued and is still sinking amongst Caracas’s black market money changers.

Chavez got upset when asked about Raul Baduel, but Ollie Stone was there to quiet him down:

The message was easy to read: Calm down.

Nice to have friends like Ollie, whose films you can bankroll, isn’t it?

When Chavez does get around to answering, his mantra is “blame American imperialism.”

As if we hadn’t heard that one yet in the past sixty years.

The text of key parts of the interview is below the fold:
END_OF_DOCUMENT_TOKEN_TO_BE_REPLACED

Big Hollywood reports on her lecture and book signing in Santa Monica,

In Nomad, Hirsi Ali states unequivocally that Christianity and Islam are definitely not equivalent, if for no other reason than Christianity’s willingness to tolerate questioning and even blasphemy without issuing death sentences, and actually calls for a “strategic alliance” between secular people –atheists like herself, Richard Dawkins, and others –and Christians in order to combat the oppression inherent in an unenlightened, unreconstructed Islam (Nomad, pp. 240-241). If this man had asked Ms. Ali his ridiculous question, she could have answered it handily. So why didn’t he? Why was he huddled in the farthest corner of the room spewing his nonsense to his nodding compatriots? What about Ayaan Hirsi Ali had flummoxed him and his fellow travellers into circles of insular outrage?

Well, she was black, so they could not dismiss her as a racist; she had lived in Somalia, Saudi Arabia, The Netherlands and the United States, so they could not call her an ignorant provincial hick; she was an avowed atheist, so they could not call her a Christian bigot on a crusade against peaceful Islam; and she was multi-lingual, articulate, and brilliant, so they couldn’t just call her stupid. All the pejoratives they usually apply to people who disagree with them wouldn’t work, and so they were left to confront her ideas, and those ideas stripped them naked, rent their garments of superiority and condescension into tatters at their feet, and left them angry and confused, whining to each other in the corners of the room, unable to say anything to her face. Their favorite weapons, ad hominem name-calling and sneering condescension, were disarmed.

You can listen to her BBC Today radio interview here. She basically hands the interviewer his lunch in less than five minutes.

While the trend in the 50 US states is bigger government, more government jobs and more spending, Luis Fortuño, Puerto Rico’s governor, is making big strides in bringing the island’s economy to a more competitive standing.

Puerto Rico’s government is preparing public-private partnerships to jump-start the island’s stalled economy and wants several of the big-ticket deals in place by year’s end.

His administration’s partnership initiatives are meant to lure outside investment to a Caribbean economy in recession since 2006 and come as the pace of global infrastructure deals between governments and businesses quickens.

In Puerto Rico, a U.S. commonwealth with big debts, chronically severe unemployment now at a 15.9 percent rate and per capita income half that of mainland America, officials are readying requests for qualifications for eight partnership projects.

There’s a new Public Private Partnership Authority, which is working on deals to privatize

and other proposals are in the works.

A different kind of proposal is also in the works: Puerto Rico’s Resident Commissioner in Congress, Pedro Pierlusi (D-PR), has introduced the Puerto Rican Democracy Act. The bill would provide for a referendum on Puerto Rico’s status, and it’s endorsed by governor Fortuño but it’s problematic. As Tim Schultz explains another point to consider on the bill, that of language,

The foreignness of English in Puerto Rico is greater in magnitude than it was in any state at any time in our national experience. Census data show that just 20 percent of the island’s residents speak English fluently. By comparison, California has the lowest proficiency rate among the 50 states, but its 80 percent proficiency rate dwarfs Puerto Rico’s. The deeply rooted preference for Spanish makes Puerto Rico’s 1993 elevation of English to “co-official” status practically irrelevant. Authentic “official English” policies increase English learning, but they will not work when English is merely an add-on to a pre-existing official language that is spoken in 95 percent of homes. Congress should condition statehood on making English the sole official language, which would still allow Spanish translations for a population in transition while insisting on acceptance of the lingua franca of the Union.

I would add another issue: Now that governor Fortuño is trying to set the island on the right track to prosperity, is it appropriate to spend millions of dollars on the referendum process – something already done several times during my lifetime – which will be repeated again, according to the bill?

I’ll be one of the featured bloggers in the BBC International #superpowernation from 9AM to 9:30AM Eastern. Read about the show at BBC Blogworld. Their tweeter feed is bbc_blogworld.

Diageo, a British liquor conglomerate that owns the popular spiced-rum brand, was lured to the Virgin Islands by $2.7 billion in rebates over 30 years on the taxes that mainland residents pay every time they buy a bottle of rum. The company also will get a new $165 million distillery and a 90 percent income-tax break.

The Beeb has put up this piece of chicanery, Why do people often vote against their own interests? which pretends to explain why us plebes don’t see the light and embrace the Obama agenda.

Leave it to the folks at Biased BBC blog to slice, dice, and chop them to smithereens,
Those crazy Republicans explained: a BBC bias masterclass. For instance, the Beeb’s political scientist says,

It might be tempting to put the whole thing down to what the historian Richard Hofstadter back in the 1960s called “the paranoid style” of American politics, in which God, guns and race get mixed into a toxic stew of resentment at anything coming out of Washington.

Admire the ju-jitsu with which the author gives us a pleasing whiff of paranoia by warning about that scary toxic stew of right wing paranoia which has been bubbling poisonously in the background for decades.

Go read the rest, and check out the comments, too.

Watch this stuff at the risk of losing a neuron or two:

In the following BBC clip, lifted from today’s ephemera, the sculptor and artistic luminary Antony Gormley shares his wisdom on matters ecological. “Dispense with your socks,” says he. “This is a time of global warming. Through our feet we can begin to feel it.” This is no doubt because “our feet connect with our brains” and “engage with time.” And what’s more, “through our feet we can begin to be one people, standing through gravity on one Earth.” Yes, standing through gravity, united in our socklessness. Go barefoot for Gaia, people. It’s “an act of solidarity.”

Let’s hope Gaia doesn’t tango barefoot or she’s going to head to the emergency room after her first beginner lesson. 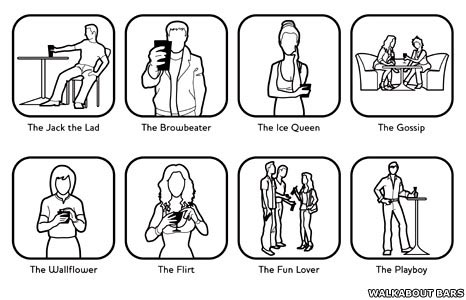 For the “take with a grain of [margarita] salt” file:
The Beeb says ‘Glass hold’ reveals personality.

If the study is accurate, you probably want to hang out with

This type of drinker could be a man or a woman. They tend to be sociable and convivial and “like a laugh”.

They take short swigs from bottled drinks so they don’t miss out on chipping in with the conversation.

The bottle is held loosely at its shoulder for ease. This type of person is always happy to extend their social circle. The best way to approach them therefore is to leap directly into light, good-humoured conversation and make them laugh.

However, it’s probably a good idea to stay away from the browbeater, whether the study is accurate or not.

The cleanliness of most NHS hospitals in England is threatened by frequent invasions of rats, fleas, bedbugs, flies and cockroaches, a report claims.

Figures released by the Conservatives show that 70% of NHS Trusts brought in the pest controllers at least 50 times between January 2006 and March 2008.

It’s one thing if the exterminators are there for regular maintenance. It’s another thing altogether when it’s because the hospital is invaded by the critters.

That’s bad enough. Cause for alarm:

Vermin were found in wards, clinics and even operating theatres. A patients’ group said the situation was revolting.

But health chiefs played down fears the infestations could lead to disease.

Excuse me?? Vermin in the operating room, and the bureaucrats are “playing down fears” it could lead to disease?? This is what we’re talking about:

VERMIN IN HOSPITALS:
Maggots in a patient’s slippers
Fleas in a neonatal unit
Sterile store infested with mice
Mouse droppings in a clinic
Wasp nest in A&E

A&E stands for accident and emergency (not the American cable TV channel). Among the other repugnant creatures found in Britain’s socialist hospitals are mice, silverfish, beetles, and bureaucrats.

Biased BBC notes how the dirt gets mentioned last.