“Today, Barack Obama is going to vote for the FISA bill he swore to filibuster when he needed the support of the far left.

The Senate is finally expected to wrap up the bill updating the Foreign Intelligence Surveillance Act today, which includes the controversial provision of retroactive immunity for telecom companies facing lawsuit. While the bill splits Democrats, it’s expected to pass with united Republican support.

Obama will be back for today’s vote and has said he’ll support final passage.”

No sooner was the virtual ink dry on the latest flip-flop that we find another one:
Obama: Don’t stay in Iraq over genocide. That was on July 20, 2007.
Fast-forward to Saturday, July 6, 2008: he said he has always reserved “the right to protect people from genocide.” (via Allahpundit)

At this rate I’ll have to add a coblogger to keep up with the Lazy Susan platform.

Change? You can believe in! 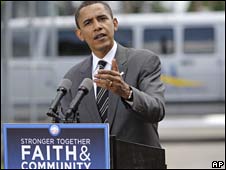 Bouncing from one side to the other faster than a tennis ball at Wimbledon… Leaping tall tales in a single bound… It’s a bird! It’s a plane! No – It’s Barack Obama!

Remember this is a guy who voted in the Illinois State Senate against the Induced Infant Liability Act which protected babies born alive after a “botched” abortion. A very similar law, the Born Alive Infant Protection Act, passed unanimously in the U.S. Senate. Even NARAL didn’t oppose that bill. He defends that position by saying that he didn’t think such a law was necessary despite the testimony in his own committee from delivery room nurses of aborted babies being left to die. He also in the Illinois legislature opposed a bill that would have instituted penalties against someone who transported a minor across state lines for an abortion.

Then on Thursday he changed his mind and said that mental distress” should not qualify as a justification for late-term abortions.

Reporter: You said that mental distress shouldn’t be a reason for late-term abortion?

Obama: “My only point is this — historically I have been a strong believer in a women’s right to choose with her doctor, her pastor and her family. And it is ..I have consistently been saying that you have to have a health exception on many significant restrictions or bans on abortions including late-term abortions.

In the past there has been some fear on the part of people who, not only people who are anti-abortion, but people who may be in the middle, that that means that if a woman just doesn’t feel good then that is an exception. That’s never been the case.

Ann Althouse looks at all this switching about and asks

Incredible. That would be incredible even without the prior inconsistent statement.

Really. Does he think we are idiots?

Frank James of The Swamp thinks that it’s because

[Obama] clearly needed to add one more thought to that statement. He did it today.

I for one can’t wait for Obama to add yet one more thought, so I’m starting a whole category titled “Oh look, Obama changed his mind”. Can we look forward for more?