Raul Castro is on a roll:
Cuban Dictator Castro Thanks U.S. With Insults And Grievances, since too much is never enough,

“After 56 years in which the Cuban people put up a heroic and selfless resistance, diplomatic relations have been re-established between Cuba and the United States of America,” the military dictator said.

Normalization of relations “will only be achieved with the end of the economic, commercial and financial blockade against Cuba; the return to our country of the territory illegally occupied by the Guantanamo naval base; the cessation of radio and TV broadcasts and of subversive and destabilizing programs against the island; and when our people are compensated for the human and economic damages they still endure,” he said.

After a speech, there’s always a photo-op:

Capitol Hill Cubans want to know, Which Conditions for Lifting the Cuban Embargo Does Obama Disagree With?

Related:
Want to Do Business in Cuba? All Roads Lead to Raúl Castro’s Son-in-Law 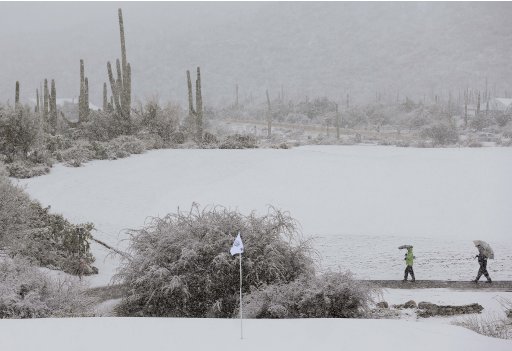 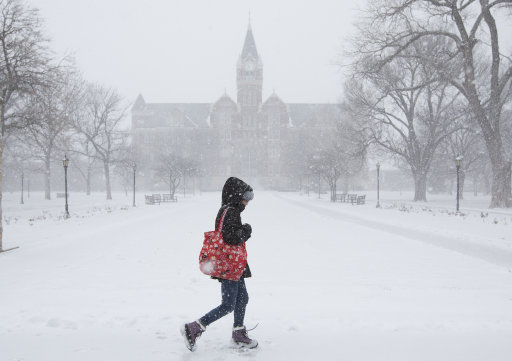 First, the luncheon menu was 3,000 calories:

And the eye roll, The day before her latest personal appearance in The View, Michelle Obama was in the vicinity for a $10,000/plate fundraiser that blocked traffic on Herrontown Road for most of the day. Surprisingly, the local papers did not report on the visit, except for a brief preview, PRINCETON: Some local Dems to skip the first lady. They probably “skipped” because of “other plans” that most likely do not involve coughing up ten grand.

However, NJ.com does have a report (more on that in a moment).

The home hosting the fundraiser had a huge tent in their side yard, but the hosts are the soul of discretion,

Representatives from the Obama national campaign office in Chicago and the New Jersey office did not respond to requests for comment to discuss the fundraiser, due to be held at the home of Andrew and Carol Golden.

Mr. Golden runs the company that manages the $17 billion endowment fund of Princeton University, while Ms. Golden works for Corner House, the local substance abuse program. She also is the chairwoman of the board of trustees of the Mercer County chapter of Planned Parenthood.

The couple are donors to Democrat politicians and causes, with Ms. Golden having given $11,000 to Texans for Truth, a group that challenged former President George W. Bush’s service in the Texas National Guard, election records showed. She declined to comment last month about the fundraiser.

I couldn’t find any photos of the event on the White House website.

However, the most interesting part of the event may be this:

First Lady Michelle Obama has made a campaign stop in New Jersey, urging her husband’s supporters to volunteer in the closing weeks of the presidential campaign – especially in swing states such as neighboring Pennsylvania.

As you may recall, in 2008 Obama took Pennsylvania by 10.1 percentage points over McCain. The Obama campaign is clearly not expecting that to repeat itself since Michelle was telling people on Sunday

Neither party has done much public campaigning in New Jersey, which is likely to go to the Democrats on Nov. 6. But campaigns have raised more than $5 million each in the moneyed state, with the president ahead by about $200,000.

That Obama has out-raised Mitt by less than 5% in New Jersey is astonishing. The bluest parts of the Garden State tend to be, like Princeton, the most affluent (with some exceptions). Maybe it has something to do with this.

Over in Ohio, another of Pennsylvania’s neighbors, today Mike Rowe meets Mitt to talk about how to get America back to work. Bryan Preston has the schedule.

Makes you wonder the residents of which state – Illinois? Michigan? – is the Obama campaign asking to head to Ohio to help get out the vote.

Stacy McCain’s been reporting from Ohio. Follow his links for his reports.

Which brings me to my purpose in writing. On Labor Day of 2008, the fans of Dirty Jobs helped me launch this website. mikeroweWORKS.com began as a Trade Resource Center designed to connect kids with careers in the skilled trades. It has since evolved into a non-profit foundation – a kind of PR Campaign for hard work and skilled labor.
Thanks to a number of strategic partnerships, I have been able to promote a dialogue around these issues with a bit more credibility than my previous resume allowed. I’ve spoken to Congress (twice) about the need to confront the underlying stigmas and stereotypes that surround these kinds of jobs. Alabama and Georgia have both used mikeroweWORKS to launch their own statewide technical recruitment campaigns, and I’m proud to be the spokesman for both initiatives. I also work closely with Caterpillar, Ford, Kimberly-Clark, and Master Lock, as well as The Boy Scouts of America and The Future Farmers of America. To date, the mikeroweWORKS Foundation has raised over a million dollars for trade scholarships. It’s modest by many standards, but I think we’re making a difference.
–
Certainly, we need more jobs, and you were clear about that in Tampa. But the Skills Gap proves that we need something else too. We need people who see opportunity where opportunity exists. We need enthusiasm for careers that have been overlooked and underappreciated by society at large. We need to have a really big national conversation about what we value in the workforce, and if I can be of help to you in that regard, I am at your service – assuming of course, you find yourself in a new address early next year.

(h/t MOTUS. Post title stolen from a commenter in the news article.)

You would think all the election talk would center on the economy, the jobless, the gas prices at the pump, and, if you have time, the disastrous foreign policy that has an effect on them.

But no. The Dems are trying to create distractions. For instance, how the Romneys transported their dog…years ago.

Well, turns out Obama had dog for dinner…years ago, too:

“With Lolo, I learned how to eat small green chill peppers raw with dinner (plenty of rice), and, away from the dinner table, I was introduced to dog meat (tough), snake meat (tougher), and roasted grasshopper (crunchy). Like many Indonesians, Lolo followed a brand of Islam that could make room for the remnants of more ancient animist and Hindu faiths. He explained that a man took on the powers of whatever he ate: One day soon, he promised, he would bring home a piece of tiger meat for us to share.”

This calls for photoshop skills above my pay grade, 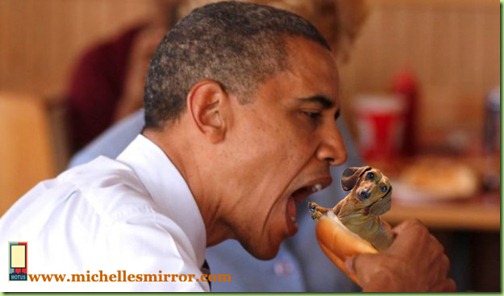 But fret not. The First Lady wants you to know that “This President has brought us out of the dark and into the light.” Sister Toldjah links to Daniel Harper,

In the book of Matthew, we read, “the people dwelling in darkness have seen a great light; and to them which sat in the region and shadow of death light is sprung up.” (Matthew 4:16) The phrase is used to describe the words Jesus preached.

In Micah, light, however, is a reference to God’s words. “Rejoice not over me, O my enemy; when I fall, I shall rise; when I sit in darkness, the LORD will be a light to me,” it says in Micah 7:8.

Either way, in religious terms, light is used to denote the true path, presented either by God or a savior. Or by Barack Obama.

Anything to create a distraction from the dismal economy.

What we need is An Economic Report From Mitt Romney’s Dog Seamus.

UPDATE,
Taranto, on Michelle’s “out of the dark into the light”,

We’re reminded of another scripture verse, 2 Samuel 16:9: “Then Abishai son of Zeruiah said to the king, ‘Why should this dead dog curse my lord the king? . . .’ “

And more,
Dog, Interrupted: Obama To Host Culinary Adventure Show
Linked by The Other McCain. Thanks!

For the past two years, it has not been any kind of Japanese beef at all.

You may have had an imitation from the Midwest, Great Plains, South America or Australia, where they produce a lot of what I call “Faux-be” beef. You may have even had a Kobe imposter from Japan before 2010. It is now illegal to import (or even hand carry for personal consumption) any Japanese beef. Before 2010 you could import only boneless fresh Japanese beef, but none was real Kobe. Under Japanese law, Kobe beef can only came from Hyogo prefecture (of which Kobe is the capital city), where no slaughterhouses were approved for export by the USDA. According to its own trade group, the Kobe Beef Marketing & Distribution Promotion Association in Japan, where Kobe Beef is a registered trademark, Macao is the only place it is exported to – and only since last year. If you had real Kobe beef in this country in recent years, someone probably smuggled it in their luggage.

Wait until Michelle Obama finds out.

UPDATE,
Linked by Maggie’s Farm. Thanks!