Welcome to the first Carnival of Latin America and the Caribbean. 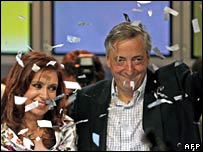 The campaign has been colorful, to put it mildly, between those auctioning their votes on line to that suitcase with $800,000 that Chavez (allegedly) sent the Kirchners last August

Argentina To Elect New Evita – Or Is It Hillary?

From The Heritage Foundation: Argentina: Implications for the U.S. If First Lady Cristina Fernandez de Kirchner Becomes President. One thing for sure: expect more populism.

BAHAMAS:
Road Rage in the Bahamas

BOLIVIA:
The women’s civic committee of Santa Cruz, Bolivia, shows how the police have tried to repress protestors. Bolivia Confidencial posts their video here (Such is Evo’s repression) in Spanish.

BRAZIL:
Learn To Surf In Floripa

Cuba, Bush, and The Lives of Others

El che lives at the UN

MEXICO:
The Rehabilitation of Miguel Hidalgo

AfroMexico – Mexicans of African descent (via Mexico in English)

Anything but no, when it comes to travelling with the dog.

Alive and blood thirsty (comments on the Che influence over chavismo)

Another shameful day in Venezuela’s democracy

The hunt for the liter of milk

Chavez is Adored by His Subjects – NOT!

The dope from Venezuela

The Prophetic Scent of repression.

The Human Rights Foundation: Artists Reunite for Human Rights in Latin America; Concert Tour in New York to Stress the Plight of the Caracas Nine

The Venezuela Connection: exhibit F, as a Royal Navy warship seizes 3 tons of cocaine from Venezuelan vessel
More at the Royal Navy website.

If you are a Latin America or Caribbean blogger who wants your post featured in next week’s Carnival, please send me your link: faustaw “at” yahoo “dot” com.
One link per blog, please.

Special thanks to Lady Godiva for her kind words and support.

Don’t miss also the resources at the Hispanic Center for Economic Research for more information on Latin America.