with Alberto de la Cruz talking about Cuba & other US-Latin America issues of the week.

Live now, and also archived for your listening convenience.

And many more decades of happy blogging to my friends, who are featured today in El Nuevo Herald,
Babalú: casa virtual de los cubanoamericanos In today’s podcast at 11AM Eastern, Henry Gomez and Val Prieto talk about the news: OAS ends Cuba suspension after 47 years.

Chat’s open at 10:45AM and the podcasts are archived for your listening convenience.

OAS Secretary-General Jose Miguel Insulza has sat placidly as Chavez and Ortega have masticated democracy in their own countries. Insulza is violating his own imperative to kick these tyrants out, because one of the rules of OAS membership is that all members be democracies. They’ve violated the Inter-American Democratic Charter since it was enacted in Lima, Peru, on Sept. 11, 2001.

Now begins the descent: Cuba’s pawns in the OAS are using their presumed legitimacy as democracies to open the door to Cuba’s brutal dictatorship, rendering the idea of democracy meaningless.

If that happens, the OAS will become just another anti-American talk shop, with Cuba driving the agenda.

Creepily enough, it will be financed by America, which bankrolls most of the OAS. The Obama administration is aware of this and thinking about yanking OAS funds if Castro sails in as full member.

You can listen to the podcast here
No politics, no bad news, just poetry!

Val Prieto, Siggy and others will be calling in.

I’m still on the road but the Carnival goes on! Welcome to the Carnival of Latin America and the Caribbean. If you would like your posts included in next week’s carnival please email me: faustaw2 “at” gmail “dot” com.

La Raza to the bottom

BRAZIL
Mending an icon: How Rio’s first good governor in decades is starting to renew Brazil’s most famous city

COLOMBIA
SWISS HELP FARC COVER UP ITS OWN BLUNDER

CUBA
Cuba to Allow Private Farming: Land Will Remain in Government Hands, However

The elephant in the room

Freedom of Speech Killed by Euthanasia in Ecuador

EL SALVADOR
Documentary on Hugo Chavez aired on Salvadoran TV (in Spanish). You can watch it in full at Fuerza Solidaria
Here’s the first part on YouTube

Venezuelan President Hugo Chavez wore a suit for the occasion, and, grinning at about 300 business leaders he usually calls “oligarchs,” asked for help relieving a drought in investment.

Deadly massage : How not to tackle a soaring murder rate

A number of human rights groups, organizations and institutions have come together in support of a petition calling for the release of Cuba’s political prisoners.The text of said petition is short, concise and to the point:

The Cuban Government is currently holding more than 220 political prisoners according to Amnesty International, the Cuban Committee for Human Rights, Human Rights Watch, and Reporters Without Borders. These prisoners are illegally held in prison according to the Universal Declaration on Human Rights and the International Covenant on Civil and Political Rights (ICCPR), which Cuba has signed and recognizes. Despite signing these documents, Cuba continues to suppress freedom of expression by outlawing peaceful advocacy for human rights and democratic reforms. In defiance of the universally-recognized rights to freedom of expression, association and assembly, Cuban activists are systematically targeted for persecution.

I am asking each and every one of you to please sign this petition.

May 21 is Cuba Solidarity Day:

Cuba Solidarity Day
The Cuban people need your help! People all over the world are joining together on Cuba Solidarity Day, this May 21, to stand beside the people of Cuba in their struggle for freedom and democracy. Let’s demonstrate our support for Cuba’s political prisoners, respect for the Inter-American Democratic Charter, and the right of the Cuban people to choose their own government and live in peace and freedom! Join us as we speak in one voice to demand peace, freedom, and democracy on the island!

May 21 has great historic significance as it falls within a two-week period in which Cubans throughout the island remember those that have suffered under the Castro regime while struggling for freedom and human rights.

Click here to find out how YOU can participate in Cuba Solidarity Day.

More on both later. Cross-posted at PoliGazette. 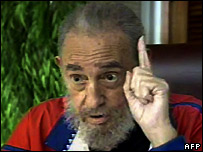 Back in 1925 Noel Coward wrote his song We Must All Be Very Kind To Auntie Jessie, where he exhorts everyone to be kind to his very difficult and domineering aunt.

CNN must have taken Coward’s advice to heart:

Michael Graham at The Natural Truth and Henry Gomez at Babalu Blog came across a memo instructing CNN anchors – imparting some “Castro guidance”, that is – on how to be kind to uncle Castro:

Some points on Castro – for adding to our anchor reads/reporting:

* Please say in our reporting that Castro stepped down in a letter he wrote to Granma (the communist party daily), as opposed to in a letter attributed to Fidel Castro. We have no reason to doubt he wrote his resignation letter, he has penned numerous articles over the past year and a half.

Of course they have no reason to doubt it, because it’s the Cuban government saying it. CNN would do well to ask, From Fidel, a farewell, or a fraud?

* Please note Fidel did bring social reforms to Cuba – namely free education and universal health care, and racial integration. in addition to being criticized for oppressing human rights and freedom of speech.

On the subject of racial integration, allow me to remind you Batista was of black ancestry.

Any of you having any questions on Cuban “universal” healthcare and “free education” please click on the label “Cuba” below this post and learn a few things about the Cuban apartheid system; ditto on oppression.

Did any of the CNN correspondents in Havana contact any of the Ladies in White recently? Or any of the Cubans asking for cambio?

By the way, has anyone ever heard the name of Oscar Elias Biscet mentioned on CNN? Particulary on the issue of abortion?

* Also the Cuban government blames a lot of Cuba’s economic problems on the US embargo, and while that has caused some difficulties, (far less so than the collapse of the Soviet Union) the bulk of Cuba’s economic problems are due to Cuba’s failed economic polices. Some analysts would say the US embargo was a benefit to Castro politically – something to blame problems on, by what the Cubans call “the imperialist,” meddling in their affairs.

Thank goodness someone at CNN has figured out that “the bulk of Cuba’s economic problems are due to Cuba’s failed economic polices.” Was high time someone did.

* While despised by some, he is seen as a revolutionary hero, especially with leftist in Latin America, for standing up to the United States.

And heaven forbid that CNN get thrown out of Cuba before they get to report that the tyrant’s croaked (or after it’s been made official) after half a century of ruining a people morally, financially and spiritually.

In yesterday’s podcast my dear friends Siggy and Val discussed the Castro “resignation”. You can listen to them here.

We weren’t kind to “Uncle Castro”.

This afternoon at 3PM Eastern I’ll be Ed Morrissey‘s guest, along with our mutual friend Val Prieto. We’ll be talking about Cuba, Venezuela and politics.

Tonight I’ll be liveblogging the debate at Heading Right.

Tomorrow at 11AM, Siggy and I will be talking about food with Happy Catholic.