Troops training for and fighting the wars in Iraq and Afghanistan are firing more than 1 billion bullets a year, contributing to ammunition shortages hitting police departments nationwide and preventing some officers from training with the weapons they carry on patrol.

In a PR piece worthy of Old Hollywood, AP’s Ian James has come up with this beaut (pay attention to the lovely text – emphasis added):

On the road with Sean Penn and Chavez

The Venezuelan president reveled in his role as host to the Hollywood star as they flew across the country Friday and traveled through the countryside in a military jeep with Chavez at the wheel, stopping to greet cheering supporters.

Can you spell Potamkin Village, Sean?

But let’s not spare the anti-American rod, lest it spoils the child, since there are poorly-veiled threats to make,

Enlivened by his conversations with Penn, the socialist president lambasted the U.S. government for “destroying the world” with war and warned of brewing economic troubles, saying Washington should do much more for its own poor.

But back to feeling the loooove,

Penn’s star power was eclipsed by Chavez, who honked to flag-waving admirers along the road through a mountain valley and stopped to kiss children and clasp hands with screaming women.

As it turns out, Ian did two versions of the same skit, since we all know that two are better than one: Sean Penn takes back seat on Chavez tour, but the loooove flows all over the place,

It was a familiar scene for Chavez, who grew up poor in a small town in rural Venezuela, and who loves to show visitors what his government is doing for everyday Venezuelans.

I’ve been quoting that very phrase out of a Venezuelan government ad that ran in the NYT in December 2005: Luckily there is a star who’s got the eggs to stand up to Venezuela’s Communist-in-chief:

Cuban-born actress Maria Conchita Alonso, who grew up in Venezuela, said Penn’s visit lends support to a “totalitarian” leader who wants increasing control of society—a charge Chavez denies. Speaking by phone from her home in Beverly Hills, California, Alonso said she respects Penn as an actor, but hopes he “comes to his senses and he realizes that he’s being used.”

Too bad they don’t give Oscars for integrity.

just as it has in so many other arenas, America’s predominance in height has faded.

What are the “so many other areas” in which “America’s predominance . . . has faded”? AP reporter Matt Crenson never gets around to telling us.

Not only are we working towards continuing “America’s prominence in height”, we’re doing our share towards supporting all sorts of related industries, such as longer mattresses, cars with more leg room and head room, and longer skirts, trousers and shirts.

And when my siblings and I were growing up in PR, we didn’t have health insurance, either.

We are, however, fortunate to have been born from a long line of tall ancestors.

Crenson goes on to say,

I forget who it was that asked, If Michael Bloomberg was taller, would he be mayor of a better city?

Six feet is still a good height, it is still a respectable height, but it is no longer a commanding presence.

But I digress. As Taranto points out, Crenson’s ideology shines through and through.

The AP story ends in yet more propaganda:

Whether that’s true is debatable; the height gap doesn’t measure how much Americans love their children. But at a minimum it does indicate – in raw feet and inches – whether the nation is giving its youngsters what they need to reach their full biological potential, or selling them short.

What it doesn’t say is how tall is Matt Crenson, its author.

Marine Matt Sanchez continues his posts as an embed. Here’s his latest, with photos: Fallujah–From Near, from Afar
While you’re there, go to his right sidebar and listen to the troops In Their Own Words. This is not the AP reporting on Harry Potter and the War on Terror; this is the real thing.

Updated, Wednesday 11 July
A while ago I defined Associated Press Deficit Disorder as

Associated Press Deficit Disorder: the innatention of Associated Press and other news agencies to the actual words said by a person who doesn’t fit what AP wants to hear.

Go read his posts
When Does a Massacre Matter?
A Hunting We Will Go
Associated Press Prints Immediate Correction
AP Responds to DecapiGate
AP: Screw the Facts, Protect the Narrative

Forget about AP.
Go read the guys who are there now, or who have been there recently:
Michael Yon in Iraq
Matt Sanchez in Iraq now, and Afghanistan
Michael Totten, who is heading to Iraq right now.
Michael Fumento is back from Afghanistan

Read their articles, look at their pictures, get the real story. And please, contribute to their blogs through PayPal if you can.

UPDATE, Wednesday, 11 July
Laws, Sausages and Journalism, and Second Chances
And Security operations in Basra, the second largest city in Iraq, soon to be transferred to Iraqui forces

For $12, a guy can get his hair cut at the Great Clips at the Princeton Shopping Center. OK, make that $15 including tip.

For $15, they wash and cut your hair, comb it, and you come out looking like the good Calvin.

Woody, writing at GM Roper‘s blog, has more on the populist Adonis

Another Reason Why Hillary Won’t Run Well (via Larwyn, who’s hot)
———————————————————
You know that the left is feeling threatened, when they have already started trying to tear down Fred Thompson. And he isn’t even in the race yet….

They describe Thompson as having a laid-back, guy-next-door nature that puts people at ease and makes anyone feel comfortable around him. At the same time, they say he has a commanding presence with his imposing 6-foot-5 (1.95-meter) frame, his unmistakable deep voice and his straight-talking way.

That’s the kind of style I like. (On the hair department, I’m sure Fred’s not spending $1250 to coif whatever little hair he’s got.)

The AP’s out on left field (all puns intended) when they say Fred lacks substance. more on that some other time. But it’s not surprising that AP would say that.

After all, they’re still saying it about Ronald Reagan.

Update, Saturday 7/7/7
Does Susan Saulny qualify as a trophy reporter?

While paying lip service to the environment Hugo’s doing his best to enlarge his carbon footprint, and the jogging suit photo-ops continue: 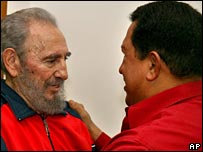 Mr Chavez has visited his friend and ally several times since his illness
Venezuelan President Hugo Chavez has made a surprise visit to Cuba at the invitation of its convalescing leader, Fidel Castro, Cuban state TV reports.
He was greeted at the airport by Vice-President Carlos Lage and Foreign Minister Felipe Perez Roque.

Mr Chavez is expected to meet Mr Castro and his younger brother Raul, who has been acting president since he underwent intestinal surgery in July.

The 80-year-old Cuban leader has been recovering at an undisclosed location.

Of course he is.

He and Hugo even discussed energy issues and a regional trade pact during an emotional visit. Anita Snow says so.

Anita’s today’s winner of the “No Sh*t, Sherlock” Award for Obvious Journalist Statements:
Castro a Key Influence for Chavez

Here we have the only two self-declared Communist rulers in Latin America, Hugo’s been Fidel’s Mini-Me for years now, and it’s taken her this long to realize it.

But then, she has to pimp pump up the pair so Hugo will grant her exclusive interviews:

Chavez, 52, spoke fondly of his friend during an exclusive interview with The Associated Press on Saturday. He brought up memories of their many conversations, recalled greeting crowds of supporters together in Venezuela and also talked about Castro while condemning as unjust the execution of Iraqi leader Saddam Hussein.

As is customary with her, here comes the excellent Cuban healthcare system obligatory soundbitetm

“In Cuba there is no child that isn’t in school, no sick person who isn’t tended to,” Chavez said.

Unless the child’s pulled away from school doing mandatory service in el campo, while the sick are tended in the customary way:

All the same, Hugo took her for a ride:

During the four-hour drive, Chavez abruptly broke away from his motorcade at one point, saying he wanted a glimpse of the Apure River swollen by rains – “a magic river,” he called it.

That’s the kind of reporting Associated Press Deficit Disorder gets you.