In spite of the federal government denials that Islamic militants may have tried to cross the Mexican border to conduct operations in the U.S., a Judicial Watch investigation reveals that al-Qaeda terrorist Adnan G. El Shukrijumah (also spelled Shukijumah in Spanish-language reports), whose mom still lives in Miramar, FL, hid in a Mexican border city across Douglas, Arizona in 2004.

El Shukrijumah was connected to Mohammed Atta, and both were with another man at the Miami immigration office on May 2, 2001,

Adnan G. el Shukrijumah, an al-Qaida terrorist leader once based in South Florida, hid in northern Mexico with two other Arab militants in a border city across from Douglas, Arizona, in 2004, newly released State Department cables say.

One of the cables noted that the information about Shukrijumah, killed in Pakistan in 2014, came from a trusted confidential source who had a relative involved in migrant smuggling.

In the case of the Shukrijumah cables, they suggest that the federal government was wrong to deny that Islamic militants may have tried to cross the porous Mexican border to conduct operations in the United States.

The Shukrijumah case has attracted wide attention since the 9/11 Commission in 2004 published a report quoting an immigration officer as saying that she was “75 percent sure” she saw the Miramar resident with hijack leader Mohamed Atta and another man at the immigration office in Miami on May 2, 2001 — four months before the plane attacks. Atta piloted the first plane to crash into the World Trade Center twin towers in New York on Sept. 11, 2001. The second man with Atta, the commission report said, was possibly Ziad Jarrah, the pilot who crashed his plane into a field in Pennsylvania after passengers rebelled and tried to storm the cockpit to recover control of the aircraft.

The possible presence of Shukrijumah with the 9/11 pilots stirred speculation that the terror leaders received assistance from U.S.-based militants while they plotted the attacks.

Related:
The Miami Herald article reports that Shrukrijumah’s mother has said her son left for Trinidad in January 2001. Here is a report on Jihad in Trinidad.

Read my update on Gitmo alumnus Jihad Ahmed Mujstafa Diyab, Jihad by any other name is still the same

comes from Argentina via Uruguay:

Syrian Jihad Ahmad Diyab, one of the six Gitmo alumni released to Uruguay last month, went to Argentina (link in Spanish), to request that that country issue asylum to other Gitmo alumni,

“I’ll never forget my comrades there, and that’s why I came here to fight.”

Here’s his interview, in Spanish, where he claimed he was just a regular guy living with his family until the Americans dragged him out of his home and sent him to Gitmo,

Part of the reporting in the JTF-GTMO files on the so-called “Syrian Group” came from the Syrian government, which was opposed to this particular group of jihadists but also eventually allied with al Qaeda in the fight against American forces in Iraq. Ultimately, in a form of blowback, that one-time alliance would fracture.

There are two forms of lying to non-believers that are permitted under certain circumstances, taqiyya and kitman. These circumstances are typically those that advance the cause Islam – in some cases by gaining the trust of non-believers in order to draw out their vulnerability and defeat them.

This report says that Diyab also goes by the name of Abu Wael Dihab; in it an Uruguayan official asserts that “none of the former detainees has expressed the intention of leaving nor made any efforts to,” even when Diyab stated in an interview that he had no desire to return to Uruguay. None of the six have accepted any employment offers, all dropped out of state-provided Spanish lessons.

The Delegación de Asociaciones Israelitas Argentinas, or DAIA (Delegation of Israelite Argentinian Associations) is worried about the possibility of a new Islamist attack in Argentina, following the theft of a TOW 2 missile and 130 FAL rifles from the armed forces.

(On a lighter vein, separted at birth? Christian Bale).

While the world looks at the terrorist holding people hostage in Sydney,

Uruguay Tries to SetPattern on Guantanamo Detainees
President José Mujica’s Government Expressed Hope That His Nation’s Gesture Would Lead Other Countries to Resettle Prisoners From at the U.S.-Run Facility. 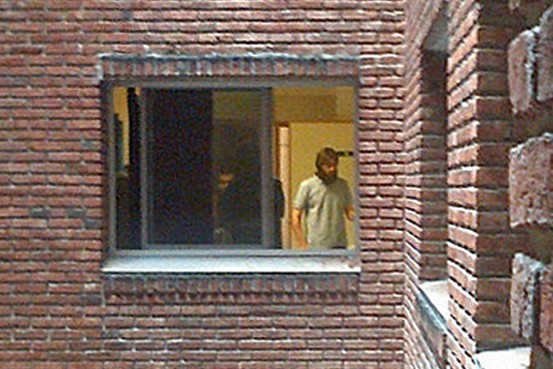 Last week I was asking under what country’s passports would the six terrorists travel. It looks like there’s an answer (emphasis added):

Approved for release from a military hospital and given Uruguayan identity documents, the men moved into a small-three bedroom house in Montevideo provided by a labor confederation. “These men have gone through an extremely difficult situation,” said Fernando Pereira, a union official, “so we’re going to give them psychological support and care.”

Mr. Mujica’s government has signaled that it wants to help the Obama administration in its goal of closing the detention center, which cannot take place until countries take in prisoners the U.S. have cleared for transfers.
…
So far in Latin America and the Caribbean, 12 former inmates have been resettled, including two in El Salvador in 2012 and four in Bermuda in 2009. The six who came to Montevideo—four Syrians, a Palestinian and a Tunisian—are the first detainees to be resettled in South America.

It’s time to put the Greenpeace vandals out of business

Brazil killer alleges 42 victims
Brazilian police arrest a man who says he killed 42 people in the last decade, which would make him one of the country’s most prolific serial killers

EL SALVADOR
El Salvador President to Cuba for Checkup after Falling Ill in Mexico, since that worked so well for Hugo Chávez.

GUATEMALA
Guatemala: Breaking the silence
How do a country and its people come to terms with the atrocities committed during a decades-long, bloody civil war? Dialogue is key here, and that’s a focus of DW Akademie projects in Guatemala.

HAITI
Haitian President May Drop His Premier
To end an impasse and allow for elections, President Michel Martelly said that he would accept the recommendations of a commission that has called for the prime minister to resign.

MEXICO
Mexico minister denies home scandal
Mexico’s finance minister defends his purchase of a luxury home, amid reports he bought it from a firm whose parent company won public contracts.

PERU
Frantic efforts to save Lima climate change talks
Main talks suspended as delegates from 190 countries admit there is ‘no consensus’, while frantic efforts have begun to reach some token agreement, but few are optimistic of a quick resolution, if any

VENEZUELA
The Precise Instant Everything Went to Hell

The Phantom of Miraflores

VenEconomy: Drug Trafficking – The Other Pest of the Venezuelan Revolution

Mother of slain beauty queen seeks asylum in the US
María Eugenia Tovar, mother of beauty queen Génesis Carmona, killed during an anti-government protest in February, would not explain the reasons for her decision

Time to put Greenpeace vandals out of business

Four were members of the “Syrian Group;” all are connected to Abu Zubaydah; only one was deemed as “medium risk,” the other five were “high risk.”

And as soon as they got to Uruguay, they were given rights to come and go as they please.

The Royal Canadian Mounted Police, their feds, have averted a potential bomb plot on a passenger train over the Niagara River

One police source said there were several scenarios being looked at during the year the suspects were tracked, including the train plot.

One of the plots uncovered by the RCMP and other agencies was a planned bombing of a passenger train on the bridge that connects Canada and the United States at Niagara Falls, a police source says.

The plot was “al-Qaeda supported” by al-Qaeda elements “located in Iran” consisting of “direction and guidance.”