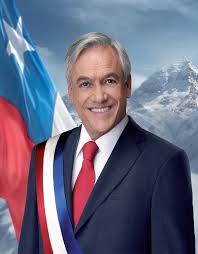 I haven’t had the opportunity to post about it, but I’m very glad Sebastián Piñera won last Sunday.

The Economist says A resounding win for the conservative candidate reaffirms Chileans’ centrist leanings, where

The result has shaken the centre-left. Mr Guillier, who ran as an heir to President Michelle Bachelet, called it a “hard defeat”. The bloc never recovered from a graft scandal in 2015 involving her son (though not the president herself). It has split over the pace and depth of her leftish reforms, such as higher corporate taxes, tighter labour laws and free college. In the first round Mr Guillier was nearly bested by the candidate of a new leftist party.

One of Bachelet’s proposals was to amend the constitution and use gains from the copper industry to pay for her social programs, a la Venezuela. Not a good idea.

The Economist correctly states, “Chile still looks most comfortable in the centre: at once pro-market and socially aware.”Piñera was the best choice.