Last September police found in Wheaton Regional Park the body of a man murdered in early Spring. It turns out that Members of an El Salvadorian street gang stabbed a man 100 times, beheaded him and cut out his heart in a park near Washington DC, police say.

Up to 10 members of MS-13 communicated on walkie talkies as they closed in on their victim at a recreational area in Wheaton, Maryland, say officials.

The victim’s “heart had been excised from his chest and thrown into the grave”, according to court records.

US President Donald Trump has vowed to wipe out MS-13.

One of the suspects, 19-year-old Miguel Angel Lopez-Abrego, appeared in court on Wednesday, according to Montgomery Community Media.

He has been charged with first-degree murder and remanded in custody.

He was arrested in North Carolina on 11 November and extradited to Montgomery County, Maryland.

According to the Washington Post, the victim was murdered in early spring, but police only became aware of the killing after a tip-off.

The body was discovered in Wheaton Regional Park on 5 September.

The victim had been buried in a woodland grave prepared before his murder, officials said. 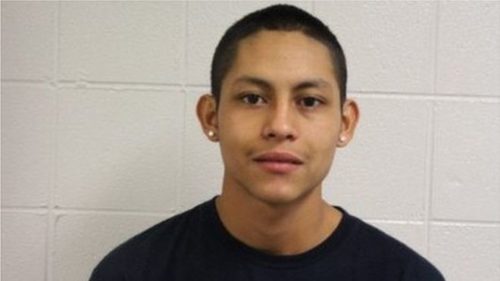 19yr old López-Abrego “is noted as being the first individual to thrust a knife into the chest of the decedent,”

Lopez-Abrego is a citizen of El Salvador, is in the United States illegally and is currently in immigration proceedings, officials from U.S. Immigration and Customs Enforcement said Wednesday.

The WaPo reports that this is not an isolated case,

The brutal slaying at the Wheaton park is part of a resurgence of killings in the Washington region that police and prosecutors attribute to MS-13.

In one case, assailants armed with knives lured a 34-year-old to his already-dug grave. A 22-year-old also was taken to a wooded area and ordered to his knees before he was shot in the face. And in another case, an 18-year-old was ambushed near a stream, stabbed and stoned before he died under a bridge of the Capital Beltway.

The Daily Wire points out

The horrific murder took place inside Montgomery County, Maryland, which is a hotbed for MS-13 gang members because it is a sanctuary county — meaning the county does not comply with federal immigration authorities to remove illegal aliens.

In May, Sen. Ron Johnson (R-WI), Chairman of the Senate Homeland Security Committee, said that a whistleblower came forward and provided documents that proved that the Obama administration knowingly admitted teen MS-13 gang members into the United States and sent them to communities throughout the U.S.