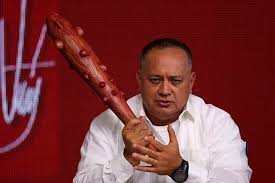 U.S. District Judge Katherine Forrest in Manhattan ruled on Wednesday that Diosdado Cabello had failed to explain exactly how the article was false.

“There is extensive evidence to justify that he is one of the heads, if not the head, of the cartel,” said the Justice Department official, speaking of a group of military officers and top officials suspected of being involved in the drug trade. “He certainly is a main target.”