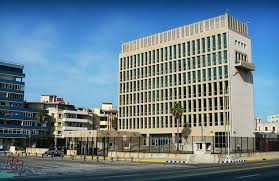 Babalu has been reporting on the bizarre acoustic attacks on American and Canadian diplomats.

Today’s WSJ has this,
At Least 16 Americans Reported Health Problems at U.S. Embassy in Cuba. Some attributed hearing loss to sonic waves from covert listening devices, but mystery remains

At least 16 Americans working at the U.S. Embassy in Havana have experienced hearing loss or other symptoms from some unknown cause that could be deliberate or accidental, the State Department said Thursday.

Some officials have attributed the ailments to sonic waves from covert listening devices, but spokeswoman Heather Nauert said Thursday that the State Department hasn’t determined an official source or cause for the variety of symptoms that diplomats have reported.

As one would expect, the communist regime has denied any involvement, but, as a WSJ commenter mentioned, it’s “reminiscent of the Soviets focusing microwaves on our Moscow Embassy back during the Cold-War.”

The Sonic attacks on U.S. diplomats in Cuba came after Obama’s concessions to apartheid Castro dictatorship.

Where’s the media coverage on this?