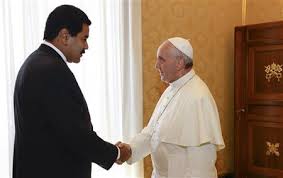 A second factor worth considering is that Venezuela’s crisis doesn’t fit into Pope Francis’s standard way of explaining contemporary political and economic problems. It’s very hard for the pope to blame Venezuela’s problems on the tyranny of Mammon, financial speculation, free trade agreements, arms-dealers, nefarious “neoliberals,” or any of his usual list of suspects.

Venezuela’s problems are clearly the result of socialist policies being imposed by a left-populist regime upon its own people. The Venezuelan bishops haven’t hesitated to describe this as the “fundamental cause” of Venezuela’s woes. The Chavez-Maduro regime has certainly created, to use Francis’s words, “an economy that kills.” But it’s not a market economy. It’s a socialist economy freely chosen and created by Venezuelan leftist-populists. There are no mysterious forces “out there” which forced Venezuela down this path (though functionaries imported from Communist Cuba have been doing their best to keep Maduro in power since 2014). While Maduro regularly blames “Yankee imperialism,” Venezuela’s disastrous situation is squarely the fault of left-wing populist Venezuelans who, like all socialists, refuse to acknowledge that such policies always lead to long-term economic ruin and can only be maintained in place by governments prepared to use “extra-constitutional” methods.