The mounting legal claims signaled a collapse in restructuring negotiations, heightening the likelihood that the federal board overseeing Puerto Rico’s finances will place the territory under bankruptcy protection, though no such filing appeared to have been made by Tuesday evening.

A legal shield protecting Puerto Rico from lawsuits expired Monday. Without having invoked Title III or signed standstill agreements with creditors, Puerto Rico for the moment is exposed to debt-related claims stemming from its fiscal plan, which allocates roughly $800 million a year over the next decade for debt payments. Creditors are owed more than four times that amount annually.

Now the lawyers are needing to get paid, too.

For decades Puerto Rico funded its overspending by issuing bonds. Investors ignored the disastrous spending even after the bond ratings collapsed because they were betting on high yields. 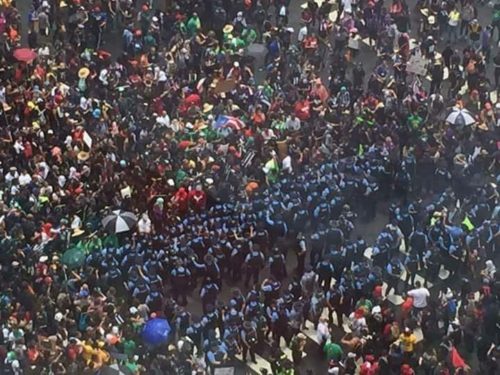 On Monday demonstrators protesting austerity measures vandalized the business district in Hato Rey, threw pepper spray canisters at the police, and blocked access to the airport,

Students Of Puerto Rico Lead Resistance Against PROMESA. A reduction of 450 million dollars to the university’s budget can only mean the imminent destruction of the UPR as we know it.

The University of Puerto Rico has been closed due to a strike; now it is losing its Middle States Commission on Higher Education accreditation (link in Spanish). Losing this accreditation means students will find it near-impossible to transfer to colleges and universities in the U.S. and overseas without losing all their credits, even if they completed a high school international baccalaureate.

Spanish was declared Puerto Rico’s official language in 2015, providing a disincentive for English-language multinationals to establish businesses in the island.

Mary O’Grady was in the Batchelor Show talking about Venezuela and Puerto Rico:

The governor noted that he does not support the PROMESA bill, nor do many on the island since many say it reeks of colonialism. In truth, the board is acting in a function that is no different from the various state takeovers of American cities (Harrisburg, Detroit) we’ve seen who were in disastrous financial condition. Still, even here, the notion of an unelected board overruling the representative body is disconcerting. Regardless, despite his opposition, the governor understood that this is the law and the new reality.

Roselló wants to cut spending by 25%.

Good luck with that. When Republican Luis Fortuño was governor, he was voted out after his first term because he tried to cut expenses.

The governor said he would petition Puerto Rico’s federal oversight board to invoke a quasi-bankruptcy law that puts its standoff with creditors before a judge. His decision marks the start to what could be a lengthy legal fight as Wall Street watches closely to see how other indebted municipal governments may fare in confrontations with investors.

The slide into bankruptcy would mark a new low in Wall Street’s relations with Gov. Rosselló, a political newcomer who pledged as a candidate to repay the territory’s debts, shrink the government and strengthen ties with the U.S.
. . .
A bankruptcy filing by the board, which creditors lobbied Congress to create, could mean deeper losses on bonds than they anticipated. Puerto Rico will face off against angry hedge funds, mutual funds and bond insurers in the court-supervised proceeding known as Title III, a legal mechanism created by Congress to restructure debts by force if negotiations broke down

This is going to wind its way through the courts, since as Matthew Wirz explains, “key provisions of Title III have never been interpreted by the courts, and the law includes protections for creditors that chapter 9 doesn’t.”