She is accused of illegally manipulating the budget to hide a growing deficit.

Ms Rousseff said she was the victim of a political coup d’etat led by those she defeated at the polls in 2014.

Ms. Rousseff is accused of violating budget laws by delaying government payments to a state-controlled bank, in effect forcing the lender to provide her administration with allegedly illegal short-term loans that made the country’s budget situation appear better than it was. Ms. Rousseff has denied wrongdoing.

Two-thirds, or 54, of the Senate’s 81 lawmakers need to vote against her for her to be ousted. Otherwise, she can immediately return to office. A question-and-answer session between Ms. Rousseff and senators followed the speech, and wasn’t expected to end until 11:00 p.m. or later. The final vote is expected to take place Tuesday night or sometime Wednesday.

The BBC updated its chart of the impeachment process: 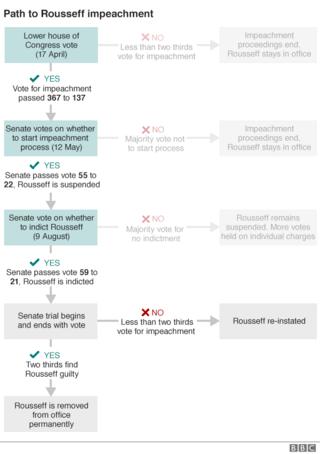