The Brazilian Senate Special Committee on Impeachment voted 14-5 to go ahead on Dilma Rousseff’s impeachment trial (link in Portuguese).

This concludes the second stage of the process, called a “judgment of pronunciation”, when the Committee decides that there is evidence for a trial. The Senate approved the opening of the impeachment process on May 12. The full Senate will vote on the Committee’s opinion next week on August 9.

The BBC has a graphic on the impeachment process that I posted last April. The process is now at the second box (“Senate votes on whether to launch impeachment trial”): 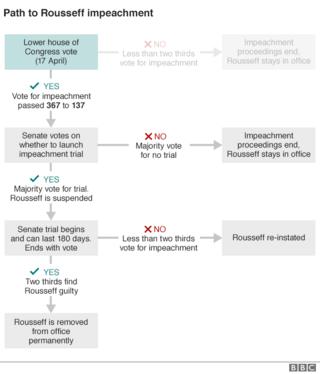